Dolutegravir-based ART recommended for all – if reliable contraception is available 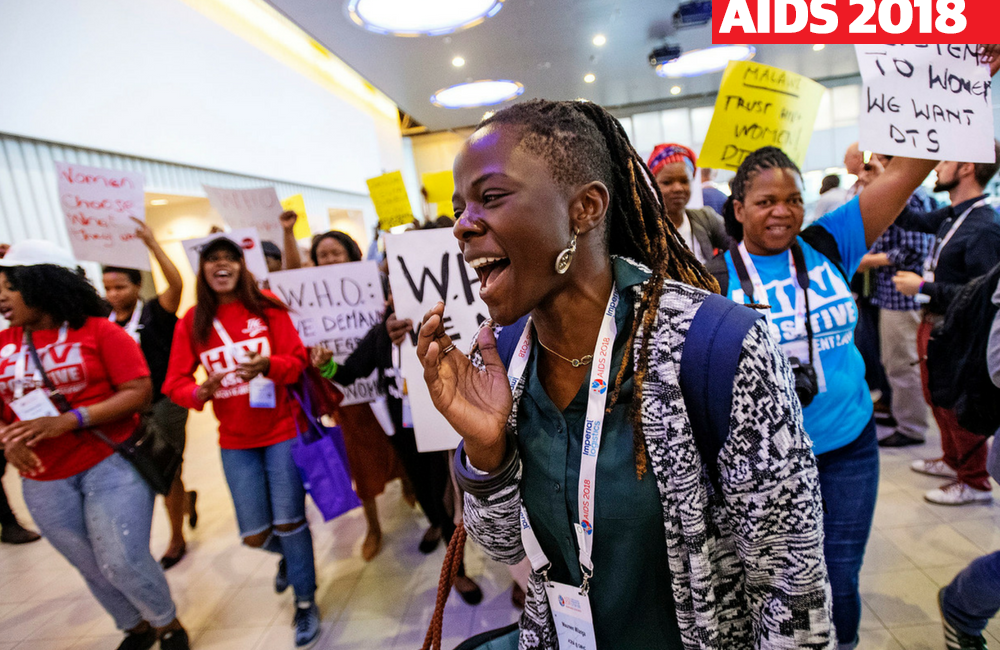 The World Health Organization (WHO) has issued new antiretroviral treatment guidelines recommending dolutegravir-based treatment as the preferred first-line treatment option for all adults, adolescents and children, including women and adolescent girls who have access to consistent and reliable contraception.

The decision highlights the huge gap in access to reliable contraception and its lack of integration into HIV programmes, especially in sub-Saharan Africa, said speakers at the 22nd International AIDS Conference (AIDS 2018) in Amsterdam, where access to sexual and reproductive health services is emerging as a major challenge facing HIV treatment programmes.

The guidelines were released on the opening day of the conference, where women living with HIV from sub-Saharan Africa demonstrated to demand that they, not ministries of health, should decide whether they receive dolutegravir. The protest came in response to recent decisions in some countries to withhold dolutegravir from women of childbearing potential due to safety concerns over the use of the drug in the early stages of pregnancy.

Dolutegravir, a highly effective HIV integrase inhibitor with a high barrier to the development of drug resistance, was first recommended in WHO guidelines as an alternative regimen in 2016. Since then, a major price reduction along with further data on the use of dolutegravir alongside tuberculosis medication, side-effects and the risk of IRIS in people starting dolutegravir have increased confidence that the drug can be used safely in resource-limited settings.

In 2017, WHO recommended that countries with high pre-treatment levels of resistance to nevirapine or efavirenz should move rapidly to introduce dolutegravir-based treatment as the preferred first-line regimen.

Some of the world’s largest antiretroviral treatment programmes have already switched to recommending first-line treatment with dolutegravir, tenofovir and lamivudine, including Brazil, Nigeria, South Africa, Botswana, Zambia and Uganda. Most other high-burden countries in southern and eastern Africa have either begun pilot introductions or plan to do so soon.

This rapid shift was challenged in May by the issuing of a safety warning of an elevated risk of neural tube defects in infants born to women who were taking dolutegravir at the time of conception. The data came from a national safety surveillance study in Botswana (the Tsepamo study) and showed that neural tube defects occurred more frequently in infants born to women taking dolutegravir at the time of conception when compared to infants exposed to other antiretrovirals (although the incidence was below 1%). Findings from this study will be presented in a separate session later today.

WHO and other regulatory agencies advised in May that until more information became available, dolutegravir should be prescribed only if women have consistent and reliable contraception. The guidelines released this week stress that women who do not want to become pregnant can receive dolutegravir together with consistent and reliable contraception.

Reactions to the safety alert

Dr Irene Mukui, Kenya’s National HIV Care and Treatment Program Manager, told conference delegates that the news of birth defects in babies born to women taking dolutegravir had come as a considerable shock, both to the Kenyan Health Ministry and to expectant patients.

“We had created a lot of enthusiasm in the country for dolutegravir,” she told a satellite session on generic drugs on Monday, “and the drug is on the shelves waiting to go.”

Kenya currently treats more than two-thirds of its estimated 1.5 million people with HIV, and the majority are on a first-line regimen of efavirenz/tenofovir/lamivudine. They had planned to transfer 90% of those people to dolutegravir (plus tenofovir/lamivudine).

Sixty per cent of those people are women, and the country has now had to perform a rapid reversal. While men will still be transferred to dolutegravir, women “with childbearing potential,” which effectively means all women and adolescent girls under 50, will be offered the choice to remain on efavirenz for now, at least until there are clearer data on dolutegravir and birth defects.

“If women have already switched and are not in their first trimester we are thinking of offering them the choice of whether to let them stay on dolutegravir or return to efavirenz,” she said.

She said that the current situation was very “tricky” because of the considerable community anticipation that had been built up in favour of the new drug and its freedom from neuropsychiatric side-effects.

Women living with HIV demonstrated during the WHO satellite meeting, demanding that blocks on access to dolutegravir should be removed and that women of childbearing potential should be allowed to make up their own minds about the potential risks and benefits of using the drug.

In particular, women activists objected to the way in which national and international guidance had undermined choice for women by placing reproductive success above treatment success, and the lack of consultation with women living with HIV at national level.

A stakeholder meeting of women living with HIV convened to consider the dolutegravir safety data earlier this month in Kigali, Rwanda. Based on the available data, the meeting concluded unanimously that “DTG’s [dolutegravir's] benefits – reduced side effects, improved efficacy and and a high barrier to resistance – outweigh its potential risks,” according to a communique circulated at AIDS 2018.

WHO recommends that women of childbearing potential should receive dolutegravir if they have access to consistent and reliable contraception, but to ensure access to dolutegravir in practice, integration of sexual and reproductive health programmes and HIV programmes needs to be greatly improved.

Dr Tendani Gaolathe of Botswana’s national HIV programme pointed out that national survey data from 2018 show that 60% of women with HIV in Botswana are 26 years or under, 80% of women with HIV are single at the time of delivery, 50% did not desire pregnancy and 80-90% had relied on condoms as their primary form of contraception. In these circumstances, improving the availability of effective methods of contraception is urgent, requiring procurement, integration, training and funding, none of which can be mobilised overnight.

Ultimately, the safety 'signal' raised by the Botswana data will only be clarified by more extensive safety follow-up of women known to have been exposed to dolutegravir at the time of conception. The Botswana study will continue, while the Brazilian Ministry of Health has launched a national surveillance study.

Francois Venter, Deputy Executive Director of the Wits Reproductive Health and HIV Institute in South Africa, said: “The one thing this dolutegravir/Botswana study has told us is how terrible we are at pharmacovigilance. We essentially approve drugs and then give them experimentally to pregnant women who have never been in the studies. We need researchers to proactively follow up cohorts rather than passively waiting for side effects to be reported. We missed this with stavudine, we missed this with efavirenz, let’s not miss it again.”

But, as Lynne Mofenson, Senior Technical Advisor to the Elizabeth Glaser Pediatric AIDS Foundation pointed out, “No ART [antiretroviral therapy] regimen is completely 'safe' when compared to birth outcomes among HIV-uninfected women – all ART regimens have some risk of adverse birth outcomes.”

Ministries of Health and women living with HIV need to balance the risk of neural tube defects – which are reduced by folic acid supplementation – if dolutegravir is used against the greater risk of unsuppressed viral load, side-effects or adverse birth outcomes other than neural tube defects if efavirenz or another antiretroviral drug is used in place of dolutegravir, speakers agreed.

Countries also need to consider the balance of risk and benefits at a population level, said Meg Doherty of the World Health Organization. These include fertility levels, contraceptive availability and coverage, levels of antiretroviral drug resistance and drug availability.