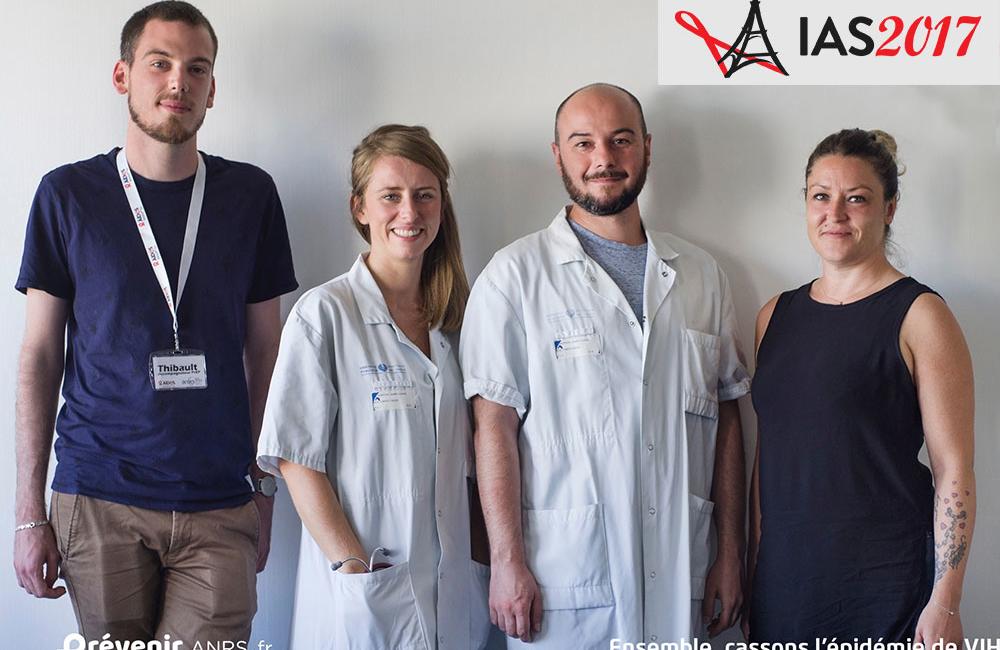 The team at ANRS Prévenir. http://prevenir.anrs.fr

France is launching a new study which will enrol 3000 new pre-exposure prophylaxis (PrEP) users over the next three years, Jean-Michel Molina told the 9th International AIDS Society Conference on HIV Science (IAS 2017) in Paris this week. Whereas previous studies, including Molina’s own IPERGAY study, proved the benefit of PrEP to the individual taking it, the new study has set an ambitious target in relation to the public health benefit of PrEP. The aim is to show that having an extra 3000 people take PrEP will result in a marked fall in HIV diagnoses among men who have sex with men in the Paris region.

The demonstration study will also gather data on the best ways to deliver PrEP and on how to engage migrants and other social groups who currently have relatively low awareness of PrEP.

France was the first European country to approve PrEP, in January 2016. It is available through hospitals, HIV testing centres and general practitioners and its cost is fully reimbursed by the country’s health system. An analysis of 2774 people taking PrEP up to February 2017 showed that 98% were men who have sex with men. Significant numbers reported sexually transmitted infections (36%), chemsex (23%) and prior use of PEP (11%).

The new study, called ‘Prévenir’ (prevent) focuses on Île-de-France, which is the region of Paris and its suburbs. HIV is concentrated in the capital region – of around 6000 new HIV diagnoses made in France in 2015, 2500 occurred in Île-de-France. Gay men are particularly affected.

A 2015 survey found that 16% of men in Parisian gay bars, clubs and sex clubs were HIV positive. There has been considerable investment in HIV testing in recent years and the treatment cascade is strong – in the same survey, 92% of HIV-positive men were aware of their status and 95% of diagnosed men were taking treatment. Nonetheless, new HIV diagnoses in gay men have not fallen in recent years. It seems that it will take something extra – perhaps a greater use of PrEP – for new infections and diagnoses to fall.

Prévenir is open to people of all genders and sexualities who are at high risk of acquiring HIV. Nonetheless, the researchers are expecting gay men to make up the vast majority of participants and the study’s primary outcome measure concerns only men who have sex with men. The researchers are hoping to demonstrate that the scale-up of PrEP, with 3000 additional people taking PrEP, will reduce the rate of new infections in men who have sex with men in Île-de-France by 15%. The analysis will compare incidence (the annual rate of new infections) in 2020 with current incidence figures, combined with some modelling of how the epidemic could be expected to evolve over time.

Having most PrEP delivery occur in the context of a study will ensure that data is collected and the roll-out can be monitored, Stephane Morel of AIDES told aidsmap.com. For example, it will be possible to track the success of efforts to engage migrants, ethnic minorities, trans people and sex workers with PrEP. The numbers of people starting PrEP following different kinds of outreach and promotion activities will be measured.

The researchers will also gather more behavioural data to give insights into how people fit PrEP into their sexual lives and their risk reduction strategies. They will collect data from participants on partner numbers, where they meet partners, use of condoms, sexually transmitted infections and sexual wellbeing.

Prévenir is a single-arm study, in which all participants take PrEP. Nonetheless, they will be able to choose whether to follow the ‘on-demand’ or ‘event driven’ dosing schedule for PrEP, which was validated in France in the IPERGAY study and which over half of current PrEP users follow, or to use daily dosing, as is more typically used in other parts of the world.

Helping participants work out which dosing schedule works best for them and how they can put it into practice will be peer counsellors from AIDES. This is similar to the IPERGAY study, in which community-based sexual health coaches were readily and frequently available to study participants, to help with understanding of PrEP, adherence, the trial design and sexual health more broadly. However, in Prévenir counselling will be provided less frequently and one of the aims of the study is to assess whether this has any impact on adherence and the effectiveness of PrEP.

The demonstration project will be able to examine whether differences in the way that PrEP is provided have an impact on its success. While many of the PrEP providers are hospital departments with experience of providing antiretrovirals to people living with HIV, others are testing centres for HIV and sexually transmitted infections. Some of these are community based and take a broad, holistic approach to sexual health. At a number of study sites, the counselling will not be provided by the AIDES’ peer counsellors, but by medical staff such as nurses or psychiatrists. Will these differences like these have an impact on participant satisfaction, retention in the study, or HIV infections?

The study is being conducted by the ANRS, the French agency for research on AIDS and viral hepatitis, in partnership with the community organisation AIDES. The collaboration builds on the close working relationships already developed in IPERGAY. Daniela Rojas Castro, director of research at the community network Coalition PLUS and one of the study’s principal investigators, told aidsmap.com that having community stakeholders closely involved in the research process was important to ensure that new models of HIV prevention fit with people’s lives.

Oregon Poised to Be Third State to Allow Pharmacist-Prescribed PrEP

Will Oregon’s new bill allowing PrEP without a doctor's prescription improve upon similar laws in California and Colorado?
TheBodyPro
15 May 21
HIV prevention policy

Trials of an injectable antiretroviral and infusions of a single HIV antibody for HIV prevention have recently come to fruition. Results from these studies, and how the field acts on them, may have important implications for future HIV prevention efforts. This special report identifies the main issues the field is contemplating in the aftermath of these trials.
IAVI
10 May 21
Sex workers

The vice-chair for HIV and AIDS on the all party pharmacy group and the NPA chief executive have urged NHSE&I to allow community pharmacies to provide PrEP to patients.
Chemist + Druggist
6 May 21
Injectable & long-acting PrEP

The rolling submission allows ViiV Healthcare to submit portions of the regulatory application to the FDA as they are completed, rather than waiting until every section of the NDA is complete to submit the entire application for review.
ViiV Healthcare press release
4 May 21
More editors' picks