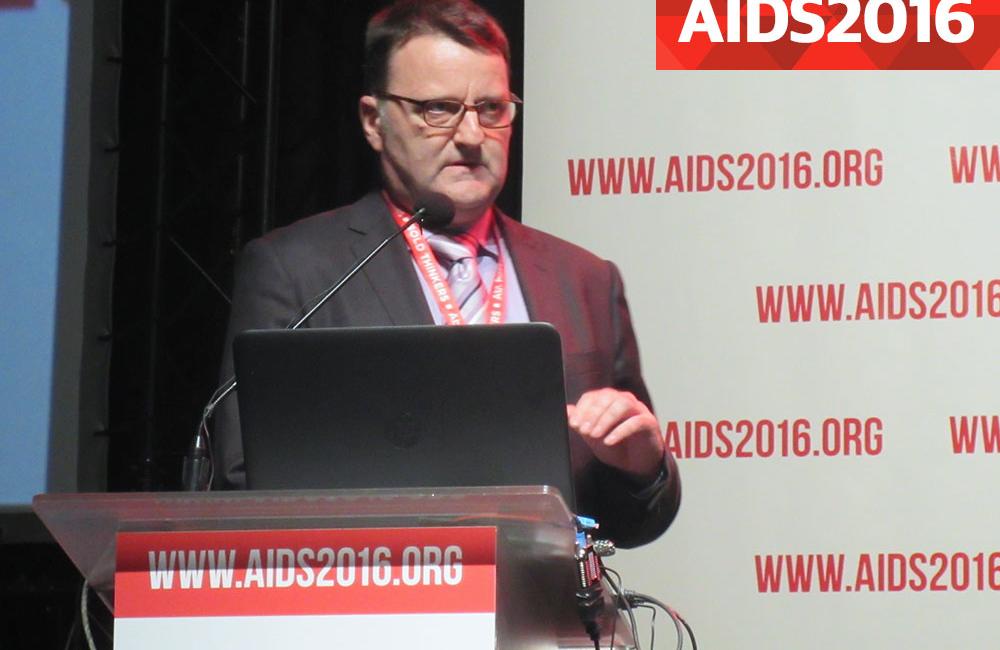 The once-daily co-formulation of sofosbuvir and velpatasvir was highly effective against all hepatitis C virus (HCV) genotypes in people with HIV/HCV co-infection and was safe and well tolerated in the ASTRAL-5 trial, according to results presented yesterday at the 21st International AIDS Conference (AIDS 2016) in Durban, South Africa. A related analysis showed that sofosbuvir/velpatasvir can be safely combined with most widely used antiretrovirals, with the exception of efavirenz.

The advent of direct-acting antiviral agents for hepatitis C has enabled shorter, better tolerated and much more effective treatment. The latest interferon-free regimens demonstrate cure rates approaching 100%, and unlike the older interferon-based therapy, they work as well for people with and without HIV co-infection.

But most of the new drugs work best against HCV genotype 1, which is the most prevalent type in Europe and the US. Genotype 3 is now considered the most difficult to treat, while genotypes 4, 5 and 6 do not have as much data. A pangenotypic regimen – one that is active against all genotypes – would simplify treatment because it could be prescribed without the need for genotype testing.

Most participants (86%) were men, 45% were black and the mean age was 54 years. Just under a third were previously treated for hepatitis C and 18% had compensated liver cirrhosis. At baseline the mean HCV RNA level was 6.3 log10.

Looking at HIV status, participants were on stable antiretroviral therapy (ART) for at least 8 weeks with undetectable HIV viral load and a mean CD4 T-cell count of approximately 600 cells/mm3. They were taking a variety of ART regimens, most often including the HIV protease inhibitors atazanavir (Reyataz), darunavir (Prezista) or lopinavir/ritonavir (Kaletra) (47% on a PI); the integrase inhibitors raltegravir (Isentress) or elvitegravir (Vitekta) (34% taking this class); or the NNRTI rilpivirine (Edurant; 12%). Most used NRTI backbones containing tenofovir in a boosted (53%) or unboosted (33%) regimen.

All participants in this open-label study received 400mg sofosbuvir plus 100mg velpatasvir taken as a once-daily co-formulation for 12 weeks. They were followed for 12 weeks after completing treatment to assess sustained virological response (SVR12), or continued undetectable HCV viral load.

At the end of post-treatment follow-up the overall SVR12 rate was 95% (101 out of 106 treated people) – similar to cure rates seen in studies of HIV-negative people with hepatitis C. Response rates ranged from 92% for genotypes 1b and 3 (reflecting a single drop-out in each arm), to 95% for genotype 1a (two relapses and one drop-out), to 100% for genotypes 2 and 4.

Cure rates were similar regardless of the presence or absence of cirrhosis (100% and 94%, respectively) and for hepatitis C treatment-naive and treatment-experienced patients (93% and 97%, respectively). HCV drug resistance also did not have a notable effect, as the 12 participants with NS5A resistance-associated variants at baseline all achieved SVR12.

The sofosbuvir/velpatasvir combination was generally safe and well tolerated. There were two serious adverse events not attributed to the study drugs and two treatment discontinuations due to adverse events; 18% experienced grade 3 or 4 laboratory abnormalities (mostly elevated bilirubin in people taking boosted atazanavir). The most common side-effects were fatigue (25%) and headache (13%). No one experienced HIV viral rebound while on hepatitis C treatment.

The researchers took a closer look at kidney function, to see whether boosted tenofovir was associated with kidney toxicity when combined with the hepatitis C drugs. Creatinine clearance remained stable over time in all ART regimen arms. It was lower (indicating more impairment) among people taking boosted versus unboosted tenofovir, but lowest among people not taking tenofovir.

"Sofosbuvir/velpatasvir for 12 weeks provides a simple, safe and highly effective treatment for patients coinfected with HIV-1 and HCV," the researchers concluded.

At the same session Annie Luetkemeyer of the University of California at San Francisco presented findings from an analysis of drug-drug interactions between sofosbuvir/velpatasvir and various commonly used antiretrovirals.

Although people with HIV/HCV co-infection now respond as well to hepatitis C treatment as HIV-negative people and are no longer considered a 'special population,' it is important to avoid combining direct-acting antivirals and antiretroviral drugs that could interact in ways that either reduce efficacy or worsen side-effects.

The researchers did a series of phase 1 randomised, multiple-dose, cross-over drug-drug interaction studies in healthy volunteers without HIV or hepatitis C. About 60% were men, most were white and the mean age was around 34 years.

Volunteers were allocated to nine cohorts, each with 24 to 30 participants, assigned to receive various common antiretroviral regimens with 400/100mg sofosbuvir/velpatasvir:

Treatment with all combinations was safe and well tolerated, with no serious or grade 3-4 adverse events and a single treatment discontinuation due to an adverse event in the Atripla group. The most common grade 3-4 laboratory abnormality was elevated bilirubin in the atazanavir arm.

The researchers measured peak, trough, steady state and total (area under the curve) plasma concentrations of sofosbuvir, its main metabolite GS-331007, velpatasvir and the antiretrovirals over time.

Sofosbuvir and GS-331007 levels rose a bit in the Genvoya arm and fell in the darunavir and lopinavir/ritonavir arms. However, these pharmacokinetic changes were not considered clinically significant based on prior phase 3 safety and efficacy studies.

Velpatasvir levels fell by about 50% in the Atripla group, leading the researchers to recommend that efavirenz (Sustiva) should not be used with sofosbuvir/velpatasvir. In contrast, velpatasvir levels rose somewhat in the Genvoya and Stribild groups and more than doubled in the atazanavir arm, but these changes were deemed not clinically significant.

Sofosbuvir/velpatasvir had no notable effect on most of the antiretrovirals. Levels of the booster cobicistat did go up, but this is not expected to introduce further drug interaction potential, Luetkemeyer said. Co-administration of sofosbuvir/velpatasvir raised tenofovir exposure by about 20 to 80% when using the TDF formulation, but not when using TAF.