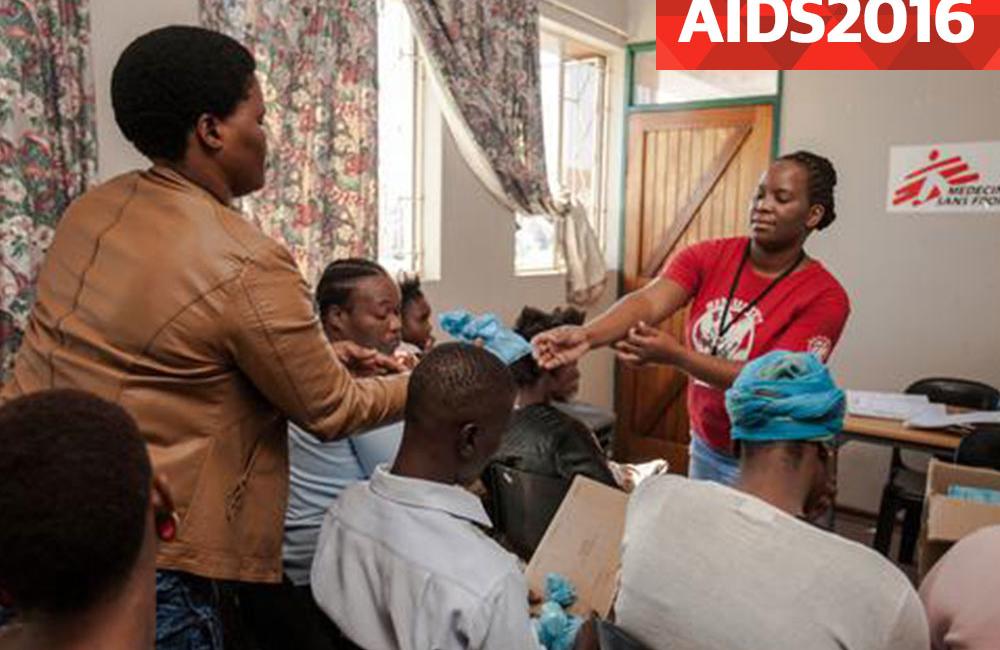 Measures to reduce the burden of people seeking health care are also critical to improving the capacity of health systems to manage growing numbers of patients, numerous presenters at the conference confirmed. The new wave of interventions – described as 'differentiated care' in guidelines – are intended to reduce clinic visits, waiting times and monitoring requirements.

The benefits for patients include less time spent waiting in clinics and travelling to clinics, fewer out-of-pocket travel expenses and less time off work due to clinic attendance, and more support in the community for adherence to medication.

The benefits for health services come in the form of increased capacity to deal with growing patient numbers, more time to concentrate on patients with complex needs, and better retention of patients in care due to the use of community health workers and other community-level mechanisms for supporting treatment.

In new guidance issued ahead of the 21st International AIDS Conference, the World Heath Organization (WHO) urged national treatment programmes to begin thinking in terms of delivering treatment to four different groups of patients, and tailoring services for each group accordingly. The four groups of patients are:

People can be expected to transition from one group to another; in the majority of cases from the 'Presenting when well' to the 'Stable' category.

"A one size fits all approach to care is no longer suitable," said Gottfried Hirnschall, director of the WHO HIV/AIDS programme, introducing the guidance.

A new, differentiated approach to care is needed, said Anna Grimsrud of the International AIDS Society. "We’re not getting the retention in care that we need, so something is wrong for patients. We need to treat all, so we will need to treat more people, and in order to reach the 90-90-90 targets, we need to speed up," she told a pre-conference satellite meeting on differentiated care.

Differentiated care involves not only the shifting of tasks to new cadres in the health system, such as community health workers, but the assumption of responsibility for managing elements of their own care by largely self-organised patient groups. These mechanisms include the distribution of medication by patient groups, which may require changes in rules in many countries.

"One of the biggest barriers to differentiated care is regulatory – rules that say this person cannot do this," said Carlos del Rio of Emory University.

But Dr Eric Goemaere of Médecins sans Frontières (MSF) warned that community services like adherence clubs are an extra cost. "Clinics still need to run," he said, pointing out adherence clubs need to be understood as a mechanism to expand the volume of patients treated, not as a cost-saving mechanism.

The analysis looked at outcomes in 24,802 patients in treatment since 2008 who were eligible for six-monthly appointments, of which 18% did not take up the option of less frequent clinic visits. Those who did not enrol were significantly more likely to die or become lost to follow-up (adjusted odds ratio 3.09, 95% CI 2.47-3.87) possibly an indication that they were considered unsuitable for switching to less frequent clinical contact, despite being clinically stable. Overall, only 3% of those who were later enrolled to six-monthly appointments were lost to care, compared to 35% of those never enrolled.

The SEARCH study of community-based testing, expedited linkage to care and treatment for all found that its model of streamlined clinic care resulted in substantially shorter patient visits – on average, around one hour less, and that both reduced waiting time and reduced clinical consultation time explained this difference.

"Nobody likes to wait, and in these communities, patients may wait up to four to five hours to see a clinician for five minutes," said Starley B. Shade of University of San Francisco California, a member of the SEARCH study team. Anticipation of such long waiting times may deter patients from attending the clinic, especially if it involves a loss of income.

The SEARCH study used a streamlined care system in its intervention communities in Uganda and Kenya in which nurses carried out triage of patients on arrival at the clinic, directing patients through blood draws, clinician appointments and pharmacy refill visits. The study included a time-and-motion element in which patients were given a form to carry through their clinic visit on which the start and finish times of each encounter with a service provider were recorded. Researchers compared waiting times and entire clinic visit times for intervention clinics (353 patients) and government clinics (745 patients) providing standard of care services to the control arm in the study. They found a mean visit length of 1.08 hours for those with CD4 counts above 500 and 1.13 hours for those with CD4 counts below 500 at intervention clinics, compared to a mean of 2.35 hours at government clinics, of which over two hours was spent waiting, with the longest waiting times for a clinical service and for a pharmacy refill. A quarter of patients at government clinics spent more than 3.5 hours at the clinic.

The streamlined care model freed clinical officers to see patients in need of clinical attention, and also reduced the total number of patient visits each day due to better planning of clinic appointments.

Swaziland has extremely high HIV prevalence (31%) but many people who need ART are still untreated. Expanding the capacity of the health system to provide antiretroviral treatment in this largely rural country will require a shift towards community-based health care. MSF implemented a pilot programme in Swaziland to evaluate the success of moving clinically stable patients on ART to community care models in 2015 and 2016. (Lukhele)

Patients in different types of facilities were given the option of moving to various types of community care, all of which offered a reduced amount of clinic attendance:

By the end of the second quarter of 2016, 727 patients had been enrolled in community ART programmes, 40% in nine adherence clubs, 46% in 60 community ART groups and 14% in three outreach communities.

Patients in each group had median CD4 cell counts above 500 and had been on ART for more than five years. Visit attendance for each mode was very high: 96% for adherence clubs and community outreach and 100% for community ART groups. Forty-one patients returned to mainstream clinic care; patients were significantly more likely to be retained in adherence clubs than in community ART groups or in outreach care.

The main reasons for returning to mainstream care were a lack of eligibility for community care in the first place, viral load test results that required clinical attention, and communication issues within the community ART group.

The MSF evaluation concluded that community management of ART is feasible and that community health workers and lay people have important roles to play in establishing and managing these services. Offering more than one model through a facility is likely to improve uptake.

People with mental health conditions are more likely to get HIV, while people with HIV often struggle with depression and other mental health issues – but few countries offer psychosocial support as part of their HIV services.
Health Policy Watch
1 Aug 22
Adherence

Large-scale HIV screening and peer support to connect people who inject drugs to HIV care successfully reduced uncontrolled HIV in this population by more than 40 percent, according to a new study conducted in Haiphong, Vietnam.
EurekAlert
20 Jul 22
Finance & funding

In order for access to preexposure prophylaxis (PrEP) to remove its over-reliance on Section 340B of the Public Health Services Act, changes to access for HIV care and PrEP need to be adopted, according to an article published in The New England Journal of Medicine.
Contagion Live
13 Jun 22
More editors' picks