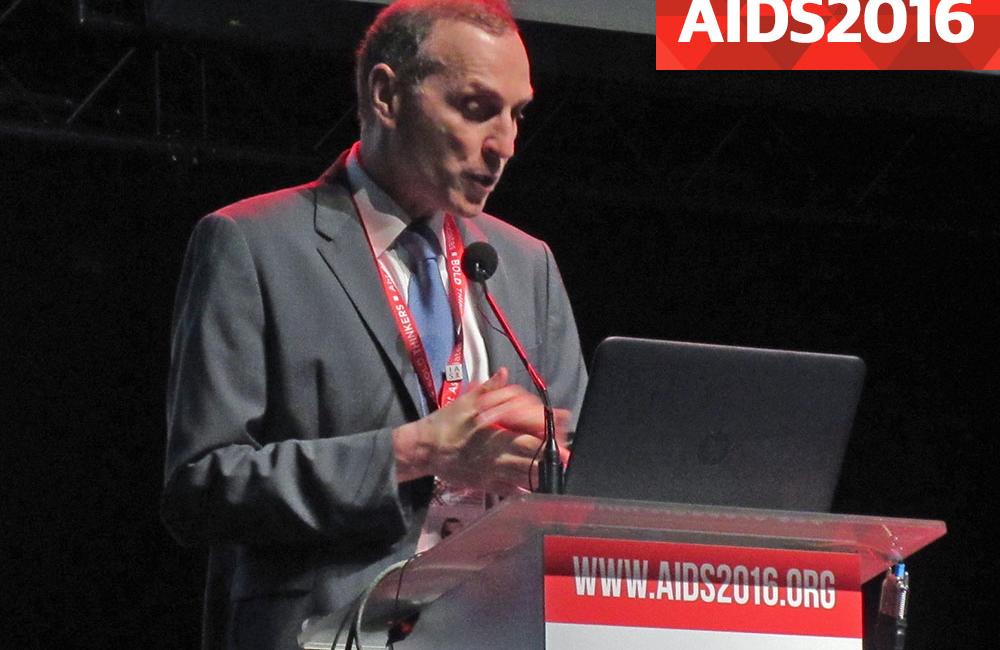 Up to July 2016, 1077 people, 96.4% of them gay men, have started HIV pre-exposure prophylaxis (PrEP) through the public healthcare system in France, Jean-Michel Molina, principal investigator of the Ipergay trial, told delegates at the 21st International AIDS Conference (AIDS 2016). Ninety clinics now offer PrEP assessment and prescription and 273 doctors have been accredited as PrEP physicians.

Half of PrEP recipients are in the Paris/Île de France area while more than 10% each are in the Auvergne, Rhone/Alpes and Provence/Côte d'Azur regions. However there is no region of mainland France that does not now include some PrEP recipients.

PrEP approval by the European Medicines Agency on 22 July means that France can now supply PrEP as a normal part of healthcare rather than via the emergency Temporary Recommendation for Use (RTU) pathway.

Molina said that two-thirds of PrEP users in France had opted to take PrEP intermittently in accordance with the regimen used in the Ipergay trial; two pills in the 24 hours before sex and one each on the two days afterwards, or daily if sex is continued. The other third opted to take it daily.

The average age of the PrEP recipients was 38, and all but 3.6% of them were gay men. Of the nine people who were women, three of them were transgender.

There have been two infections among the 1077 recipients. One of these tested positive at his one-month clinic visit and turned out to have had acute HIV infection the day he started PrEP. He had developed resistance to emtricitabine. The other was assessed for PrEP in November but decided he could not afford the initial charges that are largely recoupable through the healthcare system (see this report). He decided instead to get what were, by his own account, suboptimal doses of PrEP from friends. He tested HIV positive four months later.

At Molina's own clinic in Paris, where 396 people have started PrEP up to 1 July, one in six people wanting it had already used 'informal PrEP' and over half had used post-exposure prophylaxis (PEP). Molina said that 39% had heard about PrEP from friends, 25% from the internet and 19% via the helpline run by AIDES. Three (0.7%) tested HIV positive at baseline. Twenty-two per cent were referred to psychiatric services – "This is a vulnerable population," said Molina.

PrEP was proving challenging to implement, he said. Doctors willing to prescribe PrEP had to agree to at least ten consultations per week in addition to their existing workload, including 2 to 3 evening ones. There was a need to train more sexual health nurses, not just for PrEP assessment but to meet the increased need for STI treatment due to more diagnoses. There was not enough patient-friendly PrEP guidance and more resources were needed for the peer counselling offered by AIDES and for community engagement.

The Ipergay trial of intermittent PrEP closed its open-label extension at the end of June, bringing to a close the only PrEP trial of its specific two-pills-before-and-two-after regimen. The randomised phase was closed in October 2014 when it was found that people on PrEP had 86% fewer infections than people on placebo. By this time, of the original 400 people included in the randomised trial, 335 (84%) remained and all but two of these continued to the open-label phase where all participants knew they were taking PrEP. Twenty-nine new people were added, making 362. During the 18.4 months of the open-label trial, 63 people discontinued (with more than half saying they wanted to stop taking PrEP), meaning that retention in the open-label phase was essentially the same as in the randomised phase – 83%.

This means that the HIV infection rate in people on PrEP was 97% lower than it was in people taking placebo, though this is not scientifically rigorous, as there was no contemporaneous comparison group in the open-label trial.

The one infection in the open-label phase was in a man who had stopped taking PrEP months before the end of the randomised trial but who nonetheless wanted to be included in the open-label trial, presumably so he could start again if he felt at risk. He was in a stable relationship that was apparently monogamous. He was diagnosed 40 days into the open-label study, and his partner was found to have HIV too.

‘Adherence’ is a hard quality to define in a study of on-demand PrEP, where adherence is by definition left up to the participant, but the median number of pills taken each month (by pill count) was 18, though Jean-Paul Molina warned that true adherence could be lower, as some people stockpiled their Truvada pills up to November 2015 due to uncertainty about PrEP continuing in France. By self-report, only 50% of sex acts were covered by a ‘correct’ dose of PrEP – though the definition of ‘correct’ is in fact at least one pill before and one after sex, rather than the full two-before-and-two-after regimen, so may overestimate the number of people strictly adhered to the regimen.

However, drug levels measured in blood are in rough agreement with this figure, with 46% of all samples showing tenofovir levels in blood of more than 40 nanograms per millilitre (ng/ml), regarded as a therapeutic dose against HIV and indicating PrEP use in the last few days, and another 14% with levels above 10 ng/ml, indicating fairly recent use. Thirty-one per cent showed no evidence of PrEP use in the last month.

The pill-count figures show, as they did in the open-label trial, every variety of adherence from consistent near-daily PrEP to only occasional use, but the most consistent pattern is inconsistency – a majority of participants spent some of the two-month periods between visits taking PrEP quite consistently and other two-month periods not taking it at all.

Three out of the 299 people had to stop taking PrEP in the open-label phase due to declining kidney function, though in two cases this was only moderate (consistent decrease in creatinine clearance to about 70 millilitres per minute). Thirteen per cent experienced some gastro-intestinal side-effects, the same proportion as in the randomised phase; rates of nausea were lower and diarrhoea somewhat higher.

As already reported, there was a significant difference in sexual behaviour between the randomised and open-label phases of the trial. During the randomised phase, the proportion who used condoms during their last intercourse varied between 25 and 40%, with no significant trend. In the open label phase condom use at last sex was generally lower, and decreased significantly from 23 to 14% during the trial.

The rate at which people caught STIs was defined as the percentage of participants who were diagnosed with at least one STI in a person-year and this was 35% in the randomised phase and 41% in the open-label phase.

Significant initial investment will be needed to rollout PrEP in France

Finally, a study of the cost of instituting an Ipergay-type on-demand PrEP programme, both per patient and per HIV infection averted, showed that in the initial year, at least, the cost of providing PrEP would considerably exceed the cost of treating the HIV infections that would otherwise have occurred, unless drug prices fall to near-cost level.

The study assumed Truvada was provided at its full list price of €6098.21 a year, and that it would be taken 50% of the time. The costs of tests, treating STIs and consultations were also included. The cost of “placebo”, which actually means doing nothing but providing standard sexual health treatment without any additional appointments and treatments, was set at zero. This resulted in an annual PrEP cost per person of €4812, of which two-thirds is the cost of Truvada and another 16.5% is the cost of treating STIs.

The cost in France per patient of HIV treatment is estimated as €20,170. However in Ipergay the crucial ‘number needed to treat’ (NNT) to avoid one HIV infection is just under 18. This means that the cost of using PrEP to avert an HIV infection is €84,691 – over four times the cost of allowing the HIV infection to happen and well beyond cost-effectiveness criteria.

That is at full drug cost. Presenter Isabelle Durand-Zaleski also presented analysis based on a 30% reduction in the price of Truvada (based on the maximum discounts currently negotiated) and 88% (which would represent the maximum likely discount achievable for generic tenofovir/emtricitabine). In the latter case the cost per infection averted comes out at €22,052, which is cost-effective. However, for the time being, Durand-Zaleski said, the cost per infection averted is likely to be 2 to 3 times the cost of not using PrEP.

This was not a full cost-effectiveness model. It purely balanced the cost of a year’s PrEP versus the cost of a year of HIV treatment. As Durand-Zaleski said herself, because of its one-year time horizon, the study did not factor in the fact that sooner or later people would stop taking PrEP whereas they could not stop HIV treatment. If this was taken into account, thus turning the model into a fully longitudinal one, this would make a big difference to the accrued, if not the annual, cost of PrEP.

It also did not take into account secondary infections; Durand-Zaleski said that it is estimated that each person infected in France goes on to infect between 1.6 and 2.3 other people, and this needed to be taken into account too. Also, this is based on the observed reduction of 86% in HIV infections seen in the randomised phase of Ipergay: if PrEP’s effectiveness was even greater, the number needed to treat would go down.

Finally, Durand-Zaleski said, some of PrEP’s benefit may not be capturable in cost-effectiveness studies: this included “improved quality of life” and “improved access to healthcare for vulnerable populations”.

Durand-Zaleski I. Cost effectiveness of on demand PrEP in men who have sex with men (MSM) in the ANRS IPERGAY study. 21st International AIDS Conference, Durban, abstract THAE0304, 2016.