HIV will only be cured with combinations too, conference delegates hear 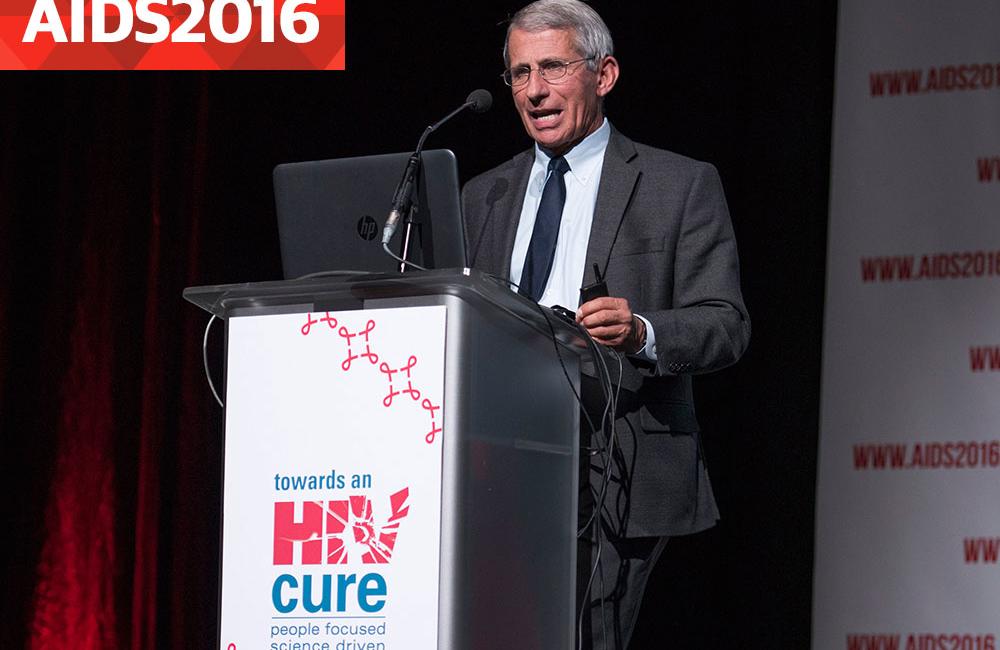 Anthony Fauci, US National Institutes of Health, speaking at the Towards A Cure Symposium session. Photo©International AIDS Society/Steve Forrest/Workers' Photos

Curing people of HIV infection will have to involve combinations of drugs and approaches, just as HIV treatment does, delegates heard at the Towards a Cure workshop held in advance of the 21st International AIDS Conference (AIDS 2016) in Durban.

The reason is the same, too: HIV can easily develop resistance to single agents, even ones as sophisticated as broadly neutralising antibodies and gene-editing enzymes.

Dr Anthony Fauci, head of the US National Institute of Allergies and Infectious Diseases, told delegates that HIV cure research was roughly at the stage HIV treatment was in 1990; as with the first HIV drug AZT (zidovudine), it was becoming clear that single agents or strategies might only have the most limited effect, and dual combinations were starting to show somewhat more promise.

Most cutting-edge cure research is still at the stage of lab-dish and animal-model research and human trials inevitably lag behind.

Disappointment for one experimental combination

Even combinations don’t work if they lack a crucial step in the sequence of events that would need to happen for HIV-infected cells to be purged from the body. The Towards a Cure workshop, and the main conference, heard about disappointing results from an experimental regimen consisting of three drugs; the immune modulator drug vorinostat, chosen because it can ‘wake up’ the long-lived reservoir cells in which HIV lies hidden; the anti-malaria drug hydroxychloroquine, chosen to contain the immune stimulant effects of vorinostat and prevent runaway HIV infection; and the entry inhibitor maraviroc, chosen because it has the potential to stop HIV spreading to new cells once the reservoir cells are woken up.

This ‘VHM’ combination was given to ten people with HIV who had been diagnosed within two to four weeks of infection, treated immediately with antiretroviral therapy (ART) and kept on ART for at least two years. It was hoped that the ‘kick’ given by this regimen would induce the body’s immune system to spontaneously eliminate the HIV-infected cells that had now become visible to it, or would convert naturally to a short-lived type that would die.

It was hoped that the combination might prolong the period people could stay off ART and/or deplete the size of their viral reservoir. However, in the event, viral load rebounded just as fast in the VHM recipients as in the ones who received ART alone and there was no change in the amount of HIV in infected reservoir cells.

Presenter Jintanat Ananworanich told the workshop that the reason VHM did not work was probably because, as other ‘kick and kill’ studies had found, that it was not enough to flush the HIV reservoir cells out of hiding. It turned out that the body’s natural immune processes did not then kill these calls and that a ‘kill’ component or toxin that actively targeted the reawakened reservoir cells would have to be added.

The study was also a reminder that experimental cure regimens might not be totally harmless; the VHM combination affected kidneys and blood clotting, and one participant had to stop because of renal insufficiency and low blood platelets.

Two antibodies are better than one...

Anthony Fauci talked about his own laboratory’s work. He is concentrating on the idea of using infusions of so-called broadly neutralising antibodies (bNAbs). These unusual antibodies have been discovered in the blood of some people with chronic HIV infection, where they have no effect as the virus has already developed resistance to them. But they have a powerful suppressive effect against the virus in some people with shorter-term infection, and can be used as long-lasting injectable drugs, as both treatment and pre-exposure prophylaxis (PrEP). The hope is that a cocktail of bNAbs might eventually have enough suppressive power to enable people to stay off conventional ART for prolonged periods, and the ultimate goal is for a vaccine or gene therapy that would induce the body to make its own bNAbs.

Anthony Fauci showed data from a trial of a bNAb called VRC01 that was given to HIV-positive people three weeks before they stopped ART and then again at monthly intervals for six months. People resumed ART if their viral load rose above 100 copies/ml or their CD4 count fell by more than 30%.

What makes the difference is that old bugbear of HIV treatment, resistance. Many people carry pre-existing resistance to specific bNAbs, and in the case of VRC01, this leads to infusions of the antibody only producing 40% more viral control when compared to doing nothing. There are, however, newly-discovered bNAbs out there that are 50 to 100 times more potent than VRC01. There are also accessory drugs that can be used to prolong the half-life of these bNAbs in the blood – adding in a cancer drug called motavizumab, itself an antibody, prolongs the half-life of bNAbs (the time for blood levels of the bNAbs to fall by 50%) from five weeks to six months.

Ultimately, however, most infusions of single bNAbs will fail because HIV will develop resistance to them. Combination of bNAbs will work better, last longer, and be given at much smaller doses.

...and so are two pairs of gene scissors

Also at the cure workshop, another study proved that the principle that two drugs worked better than one applies to the hi-tech technique of gene editing too. In March, aidsmap.com reported on a technique that literally snipped the HIV genetic information out of infected cells. It involves infecting cells with lengths of RNA consisting of two components: a guide RNA derived from a natural compound called CRISPR, and an endonuclease, a gene-destroying enzyme, called Cas9.

The guide RNAs are able to take the Cas9 to the exact point where the foreign viral DNA is inserted so that the cutting and rejoining action of the Cas9 only removes the foreign DNA and causes no collateral damage to nearby genes.

However, as aidsmap.com reported only six weeks later, the power of the CRISPR/Cas9 ‘gene missile’ is short-lived as HIV develops resistance to it very rapidly – so rapidly that it was feared this might be a dead-end as a cure technique.

However Monique Nijhuis of Utrecht University in the Netherlands showed the cure workshop that this was happily not the case. Her team has developed eight different CRISPR/Cas9 gene editors that target different parts of HIV’s genetic sequence. None of these worked well when used singly. However when cells were infected with three specific pairings – of gene editors called MA3, IN5, and PR2 – and were then infected with HIV, either a very weak infection followed by complete viral suppression was the result, or in the case of MA3 + PR2, no sign of infection at all, at least for the 55 days the lab study lasted.

Here the gene probes were preventing HIV infection, essentially arming cells with defensive anti-HIV machinery; Nijhuis commented that viral suppression, though so far not quite so profound, was seen where cells were infected with HIV first and then CRISPR/Cas9s were then introduced as a treatment.

Gene therapy is at a very early stage of development and in the case of HIV has not even been tried in animals yet: Nijhuis commented that several challenges remained, including the fact that they did not know why some pairs of gene probes worked better than other pairs, and how to accomplish the much more difficult task of infecting the right cells in the body with them rather than simply infecting all the cells in a lab dish. It is also likely to be an expensive approach, and hard to adapt for low-income settings. It is however encouraging that simply using two gene probes instead of one has restored potency to what could be an incredibly precise way of removing HIV from the body.

This was also presented as abstract TUAX0101LB at the main AIDS 2016 conference – see http://programme.aids2016.org/Abstract/Abstract/10535

This was also presented as abstract WEPEA022 at the main AIDS 2016 conference – see http://programme.aids2016.org/Abstract/Abstract/4228