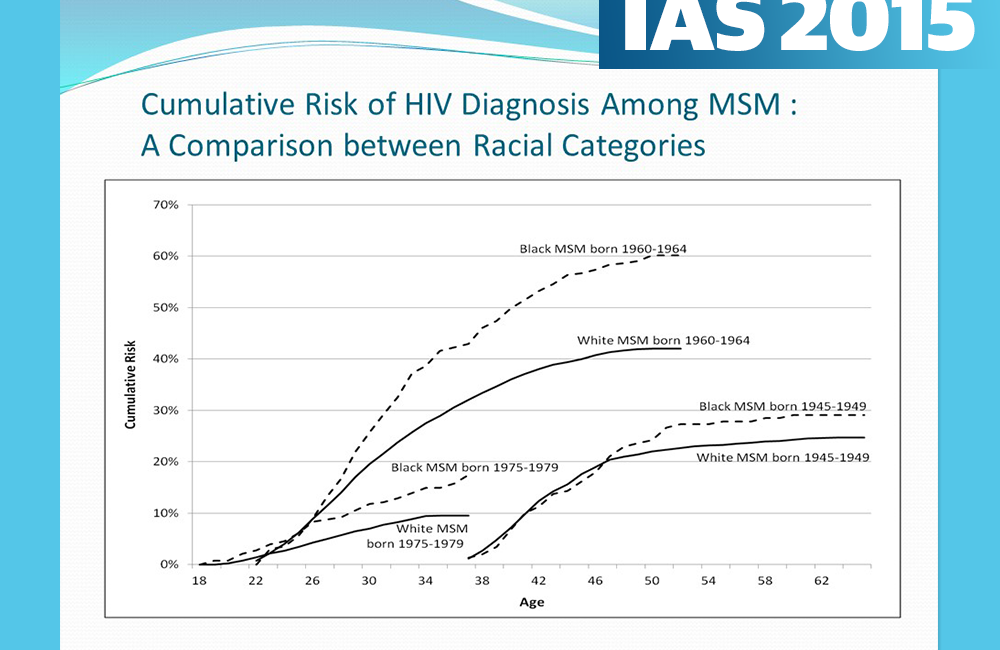 Image from presentation by Galant au Chan at IAS 2015.
This article is more than 7 years old. Click here for more recent articles on this topic

An innovative analysis of HIV trends in the Seattle area has found that gay men who were born in the early 1960s had the highest lifetime risk of acquiring HIV, but that this risk has declined dramatically in subsequent generations. While black gay men born in the 1970s and 1980s have a much lower risk of acquiring HIV than their forebears, racial disparities remain stark.

Presenting the results on Tuesday to the Eighth International AIDS Society Conference on HIV Pathogenesis, Treatment and Prevention (IAS 2015) in Vancouver, Galant au Chan of the University of Washington said that the results are probably not generalisable across the United States.

Seattle has high-quality services, good access to effective HIV treatment and a well-informed population. Dr Chan is planning to conduct similar analyses of the epidemic in other parts of the country to compare results.

The first age cohort examined are white men who were born in 1945-49. They would have been in their thirties when the AIDS epidemic began in the 1980s and those still alive are now in their late sixties or seventies.

The risk of ever acquiring HIV was significantly higher for the cohorts of gay men born in the 1950s. The group of men hit hardest by the epidemic are those born in 1960-64. They were in their late teens or early twenties when AIDS began and the survivors are now in their fifties.

But these lifetime risks have declined significantly in subsequent generations. For example, those born in 1975-79 were in their late teens or early twenties when combination therapy was introduced.

They are now in their late thirties and just under 10% have HIV. There are signs that this total may have reached a plateau.

The figures on those born in the 1980s and early 1990s are more encouraging although there are obviously fewer data on the youngest generations.

A similar pattern was seen in black gay men, but with interesting trends in terms of racial inequalities.

Firstly, the cohort of men born in 1945-49. For approximately the first decade of the epidemic, when these men were aged 38 to 48, their risk of infection was identical to that of white gay men. However, racial disparities then began to emerge, so that 24% had HIV by the age of 50 and 29% by the age of 60. This is a few percentage points higher than in white men.

But the racial disparity has, if anything, widened. The 17% figure should also be compared with the 10% in white men of the same generation.

Concluding, Chan said that the Seattle area “may be ageing out of the HIV epidemic”.