World Health Organization to recommend HIV treatment for all 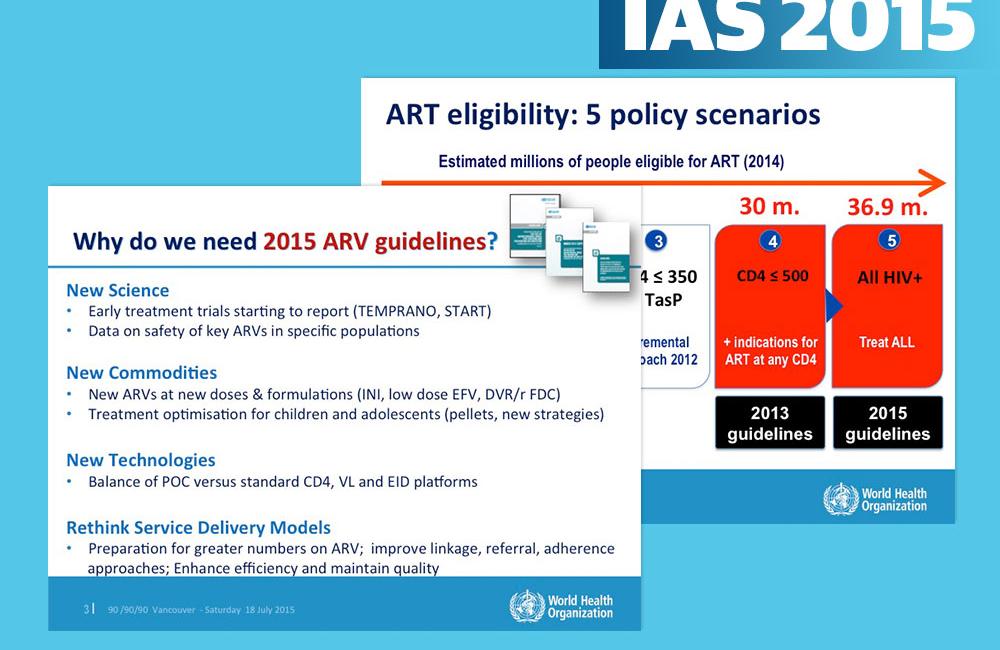 Image from presentation given by Dr Meg Doherty of the WHO Department of HIV/AIDS at IAS 2015.

The World Health Organization will issue new HIV treatment guidelines later this year recommending treatment for all, regardless of CD4 cell count, Dr Meg Doherty of the WHO Department of HIV/AIDS told a satellite meeting ahead of the 8th International AIDS Society Conference (IAS 2015) in Vancouver on Sunday.

The new recommendation follows results from two large randomised trials, TEMPRANO and START, both released in 2015, which both showed that starting treatment at a CD4 cell count above 500 cells/mm3 resulted in less serious illness and AIDS-related deaths than if treatment was deferred.

The new guidelines, based on systematic review of trials and observational cohort data presented since the publication of consolidated WHO antiretroviral treatment guidelines in 2013, will recommend:

The new guidelines will lend further weight to the UNAIDS 90-90-90 target, which aims to diagnose 90% of people with HIV, treat 90% of people diagnosed with HIV and achieve undetectable viral load in 90% of people on treatment by 2020.

UNAIDS announced last week that its previous treatment access target – 15 million people on treatment by 2015 – was surpassed in March 2015. At the end of 2014, 40% of people living with HIV were on treatment worldwide.

The new target implies that 36.9 million people will need to receive antiretroviral treatment by 2020. The new guidelines will present major challenges for countries, but evidence presented on Saturday at a pre-conference meeting on treatment as prevention shows that the 90-90-90 target is already in reach for some African countries. Similarly, Brazil is making rapid progress towards providing treatment for everyone with HIV since changing its national guidance in late 2013, said Fábio Mesquita of Brazil’s Ministry of Health. The number of people starting treatment rose by 30% in 2014, to 74,000 in one year. To achieve its 90-90-90 target, Brazil needs to treat a further 177,000 by 2020, and diagnose around 71,000 who do not know their HIV status.

"..the biggest challenge is getting the health service to rise to the challenge, in terms of managerial capacity, health care providers, preventing stock outs." Professor Salim Abdool Karim

One in six people on antiretroviral treatment will live in South Africa, where 6 million people will need treatment by 2020. Professor Salim Abdool Karim of the Centre for the AIDS Programme of Research in South Africa (CAPRISA) said that for South Africa “the biggest challenge is getting the health service to rise to the challenge, in terms of managerial capacity, health care providers, preventing stock outs.”

Changes in treatment guidelines are not the only factor that will improve the impact of treatment, the meeting heard. Analysis of epidemiological data from sub-Saharan Africa suggest that around 35-40% of AIDS deaths are occurring in people who have been diagnosed with HIV but never linked to care or who become disengaged from care, and this proportion is likely to increase as the undiagnosed population diminishes, said Professor Timothy Hallett of Imperial College, London. Modelling by an international partnership of researchers shows that AIDS deaths could be reduced by between 6% and 14% by offering treatment at the time when people with HIV first present to health services, Prof. Hallett said. The reduction in deaths would occur not as a consequence of early treatment, but as a result of preventing loss from care, emphasising the importance of identifying the best methods of improving linkage to care and retention in care.

The new guidelines will also consider how to integrate the use of low-dose efavirenz and the integrase inhibitors – especially dolutegravir – into clinical care. Approximately two-thirds of people on first-line treatment worldwide are taking efavirenz, which is highly potent and widely available in generic formulations at low cost. It does have some disadvantages however, including interaction with the TB drug rifampicin which complicates dosing, and a cluster of neuropsychiatric side effects such as sleep impairment, dizziness and depression which make it difficult to tolerate for a significant minority of people.

A systematic review of 76 trials were conducted as part of the guidelines review, comprising 35,270 patients, including six direct comparisons of efavirenz with integrase inhibitor-based regimens. They concluded that integrase inhibitors are more effective at suppressing HIV than efavirenz over follow-up of up to two years, and that dolutegravir or reduced-dose efavirenz are superior to other rgeimens in terms of CD4 recovery.

Dolutegravir has been licensed to the Medicines Patent Pool by ViiV for the development of fixed-dose combination antiretroviral products for lower-income countries, and both the Medicines Patent Pool and the Clinton Health Access Initiative (CHAI) project that by 2025 between 72% and 76% of people on HIV treatment worldwide will be taking a first-line regimen based on dolutegravir.  But, in the interim, the shift to better-tolerated regimens will happen at varying paces in different countries.