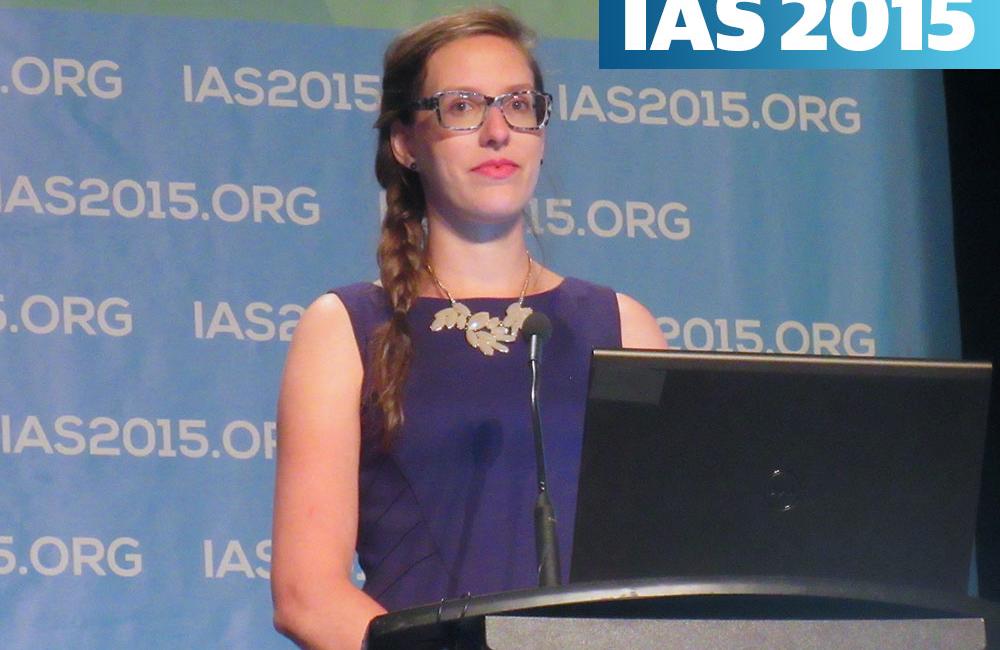 Laurence Brunet at IAS 2015. Photo by Liz Highleyman, hivandhepatitis.com
This article is more than 7 years old. Click here for more recent articles on this topic

People with HIV and HCV co-infection, with liver cirrhosis, who achieve sustained virological response (SVR) and experience an improvement in liver fibrosis are less likely to develop liver disease complications or die from liver-related causes – and in some cases fibrosis regression is beneficial even in the absence of a cure – according to a presentation at the Eighth International AIDS Society Conference on HIV Pathogenesis, Treatment and Prevention (IAS 2015) last week in Vancouver, Canada.

A related study looked at predictors of liver fibrosis progression in people with HIV and HCV co-infection, finding that use of certain NRTI ‘backbone’ antiretroviral drugs and HIV protease inhibitors may increase the risk.

People living with HIV who have HCV tend to experience more aggressive liver disease progression than people with HCV alone, especially if they have advanced immune system damage. In the era of effective antiretroviral therapy (ART), liver disease is now a leading cause of illness and death among people with HIV.

The reasons for increased disease progression among people with co-infection are not fully understood, but may include immune dysfunction, persistent inflammation or metabolic changes related to chronic HIV infection, and ART toxicities. Most modern antiretrovirals are well-tolerated and usually do not cause liver toxicity in the way that some older medications did, but subtle harmful effects may occur over time.

The researchers estimated liver fibrosis using the AST-to-Platelet Ratio Index (APRI), a non-invasive biomarker index based on aspartate aminotransferase – an enzyme that rises with liver inflammation – and platelet count. APRI is not as accurate as a liver biopsy or FibroScan (ultrasound transient elastometry), but it can be calculated from routine laboratory test results found in patients’ medical records.

This analysis included 348 cohort members with HIV and HCV co-infection who started ART in the year 2000 or later. A majority were men, the median age was in the mid-40s and they had been on ART for about two years. About a third had a history of injecting drugs and more than half reported alcohol use, another risk factor for liver damage. People who were on hepatitis C treatment and those with hepatitis B triple infection were excluded.

The study was restricted to people who used an ART ‘backbone’ of either tenofovir/emtricitabine (the drugs in Truvada) or abacavir/lamivudine (the drugs in Kivexa or Epzicom); some older drugs in this class can cause liver damage related to mitochondrial toxicity. In addition, as an ‘anchor’ drug, about 30% used an NNRTI (92% of whom took efavirenz [Sustiva]) and 70% used a HIV protease inhibitor (56% atazanavir [Reyataz], 29% lopinavir/ritonavir [Kaletra] and 15% darunavir [Prezista]).

"Fibrosis development [was] more influenced by [NRTI] backbone than class of anchor agent," the researchers concluded. However, most people did not progress to significant fibrosis over this five-year follow-up period.

"Since liver disease is a major cause of illness in HIV-positive people, it would be beneficial if we can find [antiretroviral] regimens not associated with fibrosis over time," Burnet suggested.

At the same abstract session, Santiago Moreno of Ramon y Cajal Hospital in Madrid presented findings from a study of liver fibrosis regression after hepatitis C treatment in people with HIV and HCV co-infection, and how this influences liver-related complications, hospital admissions and death.

Several studies of people with HCV monoinfection have shown that successful treatment with interferon-based therapy can halt or even partially reverse liver fibrosis, and this improvement is associated with a reduction in liver disease complications and death over time. However, even people who have been cured of HCV are not completely protected against developing liver-related complications or liver cancer. Direct-acting antiviral agents in interferon-free regimens have not yet been around long enough to have long-term data on outcomes.

Less is known about disease progression after hepatitis C treatment in people with HIV and HCV co-infection. But a study presented at this year's Conference on Retroviruses and Opportunistic Infections (CROI) showed that people with co-infection remain at risk for liver failure, liver cancer and liver-related death even after being cured, with outcomes worsening the longer treatment is delayed.

Moreno's team compared the incidence rate and time to develop complications and death in co-infected people with cirrhosis, according to whether they achieved sustained virological response and liver fibrosis regression using interferon-based therapy.

This study included 133 people with co-infection treated with pegylated interferon and ribavirin at Ramon y Cajal Hospital since 2004. More than three-quarters were men and the average age was 42 years. Most (59%) had HCV genotype 1, followed by 3 (34%), 4 (17%) and 2 (3%). They had been living with HCV for more than 20 years and were followed-up for nearly seven years after hepatitis C treatment.

Overall, 42 participants, or 32%, achieved SVR, with the rest being non-responders or relapsers. While cure rates using the new interferon-free direct-acting antivirals are typically above 90%, SVR rates below 50% are not unusual for people with co-infection using interferon and ribavirin.

A total of 37 participants experienced fibrosis regression, which was much more likely to occur in people who were cured (55%) compared to those without sustained response (15%).

Fibrosis regression rates among people with SVR were 22%, 9%, 52% and 17% for HCV genotypes 1, 2, 3 and 4, respectively. Among the 14 people who showed fibrosis regression without SVR, 79% had genotype 1, with a single study participant with each of the other three genotypes. Regression without SVR was relatively more likely among relapsers – those who had undetectable HCV at the end of therapy but saw the virus rebound after stopping treatment.

Overall, people who achieved SVR were less likely than people who were not cured to experience liver-related complications, hospitalisation, liver-related death or death due to any cause. But fibrosis regression also played a major role.

Fibrosis regression was the only factor significantly associated with lower risk of death in a multivariate analysis, with a 64% reduction in the risk of all-cause death (adjusted hazard ratio [HR] 0.36) and a 85% reduction in liver-related death (HR 0.15). Both fibrosis regression and SVR were associated with lower likelihood of liver-related complications, cutting the risk by 91% (HR 0.09) and 76% (HR 0.24), respectively.

"Our study clarifies the risk of complications after therapy in HIV-infected patients with cirrhosis, showing a lower rate if fibrosis regression is attained in addition to SVR," the researchers concluded.

CD4 count between 200 and 349, versus a higher count, emerged as the only variable that predicted failure of direct-acting antiviral (DAA) therapy for HCV infection in people with HIV.
NATAP
5 Aug 22
UK health services

The NHS will identify people who may have the virus by using AI to scan health records for a number of key risk factors, such as historical blood transfusions or an HIV diagnosis.
The Guardian
1 Aug 22
Hepatitis & HIV

World Hepatitis Day 2022 launches today with the campaign theme, 'I Can't Wait'. The theme highlights the need to accelerate the fight against viral hepatitis which claims one life every 30 seconds.
GlobeNewswire
28 Jul 22
Hepatitis B

People with HIV are at greater risk for hepatitis B but are less likely to get vaccinated and respond to vaccines, but if people living with HIV do contract HBV, there is evidence that they might receive more attentive care than those with hepatitis B alone.
POZ
21 Jul 22
Hepatitis C transmission & prevention

The risk for hepatitis C virus reinfection among individuals with HIV infection was most increased among men who have sex with men, according to results of a study published in The Lancet HIV.
Infectious Disease Advisor
8 Jul 22
More editors' picks