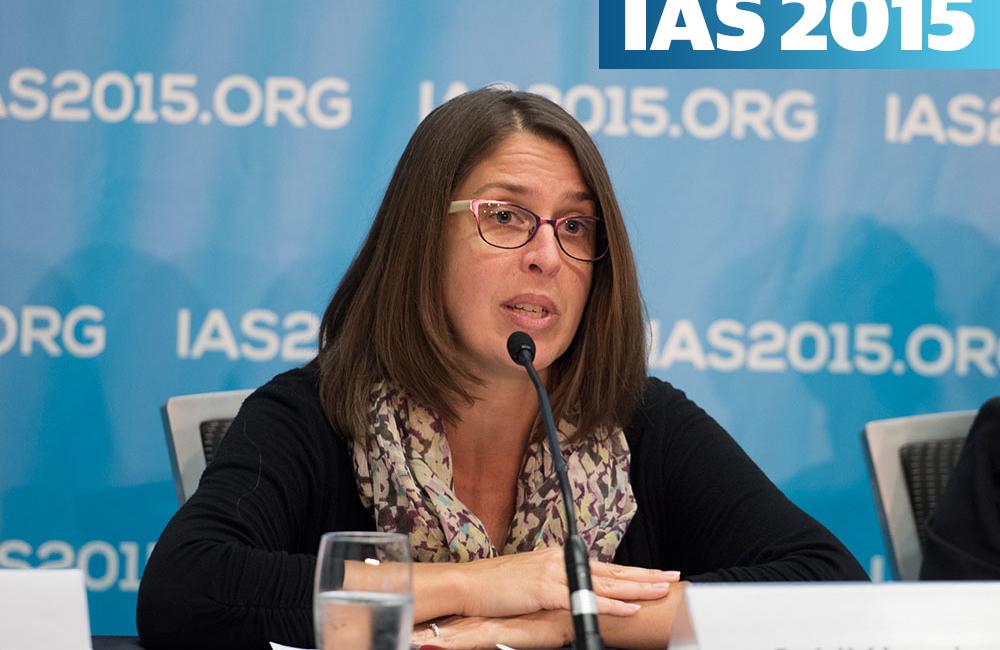 Sybil Hosek at IAS 2015 photo ©Marcus Rose/IAS
This article is more than 7 years old. Click here for more recent articles on this topic

A US study of pre-exposure prophylaxis (PrEP) in 200 young gay and bisexual men aged 18-22 found reasonable levels of adherence. Adherence was highest in those with the highest risk of HIV.

However the study found that adherence dropped off considerably after study visits changed from monthly to quarterly, suggesting that gay youth starting PrEP would benefit from more intensive support than older participants. It also found considerably lower adherence among young black and mixed-race men.

“This is a group of young men very few of whom have health insurance or go to healthcare regularly. We need to do more research on the health beliefs and levels of trust of our participants in order to understand what might support PrEP use.” Dr Hosek

ATN (Adolescent Trials Network) 110 is one of a series of studies investigating the safety and feasibility of PrEP in young gay men. A previous pilot study, ATN 082, was reported on aidsmap.com in 2013. A third study, ATN 113, which looks at PrEP in teenagers aged 15-17, is due to report in 2016.

Sybil Hosek of Stroger Hospital in Cook County, Chicago told delegates at the Eighth International AIDS Society Conference on HIV Pathogenesis, Treatment and Prevention (IAS 2015) that men who have sex with men (MSM) aged 13-24 were the group hardest hit by the US HIV epidemic but were not represented in PrEP studies.

Initially, candidates for the study registered interest in it online or during information visits conducted at health venues. Over 2,000 men were initially contacted at the pre-screening stage but 42% decided they were not interested and 40% did not meet trial eligibility criteria. This left 400 eligible. Of these, 123 decided at this stage they did not wish to participate, leaving 277 who were asked to attend a screening visit. Of these, 34 did not turn up or lost contact, 15 were excluded for medical reasons, and 11 (4.4% of those screened) tested HIV-positive. This left 200, of whom 142 stayed the full length of the trial. Thirty-five were lost to follow-up, which is actually quite a low proportion for this highly mobile population. Twenty-five participants (12.5%) decided to stop taking PrEP due to side-effects, largely gastro-intestinal, during the study.

The average age of the 200 enrolled was 20, 78% identified as gay and the rest bisexual, 30% were unemployed, and a third had no education beyond 16. One in six stated that they had been kicked out of home, and 29% had been paid for sex. Fifty-three per cent were black, 17% were Hispanic and 21% white, with the rest mixed-race and Asian and Pacific Islanders.

The participants were not immediately given PrEP. Firstly, they did either a seven-week behavioural course designed to strengthen self-care and assertiveness behaviours (Many Men, Many Voices), or the equivalent number of sessions of cognitive-behavioural counselling. Only after this were they given PrEP. They were not randomised to the interventions as the clinics involved in the study were already offering one or the other of these two interventions.

Adherence to PrEP was initially good, with just under 60% of participants with blood drug levels over the level that would indicate that at least four doses a week were being consistently taken, which is regarded as being fully protective. At the second monthly visit 95% of participants showed evidence of having taken at least some PrEP.

However adherence levels fell noticeably after week 12 of the 48-week study, when clinic visits switched from monthly to quarterly. By the end of the study only 35% of participants were taking at least four doses a week and 30% showed no sign of having taken PrEP at all.

Dr Hosek commented: “This is a group of young men very few of whom have health insurance or go to healthcare regularly. We need to do more research on the health beliefs and levels of trust of our participants in order to understand what might support PrEP use.”

One participant was found to have HIV at the month one visit and had been in his ‘window period’ at his first study visit. This was not counted as an HIV infection within the study.

There were four infections in participants during the study, at weeks 8, 32, 40 and 48, giving an annual incidence rate in participants of 3.29% a year. All these four had taken PrEP at some point but none had detectable levels of tenofovir in their blood at the study visit where HIV was diagnosed. The last man to be infected, at week 48, had maintained protective levels of PrEP until halfway through the study and had then started taking it less often; the other three had difficulties with adherence from the start.

However participants that reported engaging in condomless sex had consistently higher levels of tenofovir at all study visits, indicating that PrEP use was related to perceived risk (p = 0.005).

“ATN 110 successfully engaged young men who had sex with men who would be eligible for PrEP,” Dr Hosek commented.

“HIV incidence rate was high compared to PrEP arms in other open label trials but, given the high number of incident STIs, it would likely be even higher in the absence of PrEP.”