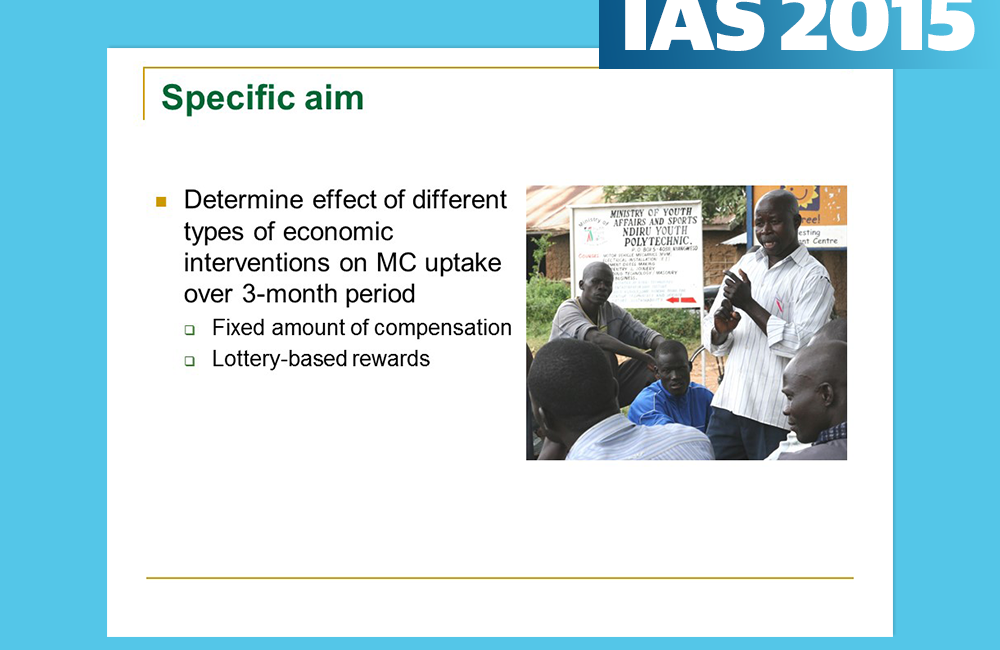 Image from presentation by Harsha Thirumurthy, at IAS 2015.

Cash compensation can improve the uptake of key HIV prevention services in sub-Saharan Africa, results from two randomised studies show. The studies were presented on Tuesday at the Eighth International AIDS Society Conference on HIV Pathogenesis, Treatment and Prevention (IAS 2015) in Vancouver, Canada.

Researchers from the University of North Carolina at Chapel Hill designed a study targeting young men aged 21-39 in which they compared the immediate incentive of compensation with the future-oriented opportunity of a large-value prize, in order to test which approach generated greater demand.

The study randomised participants to one of three groups:

The study enrolled 909 uncircumcised men with an average age of 29 in eight districts in western Kenya, where a well-established service provides medical male circumcision. Median daily earnings were $3.80.

There was no significant difference in circumcision uptake between the lottery group and the control group, probably because of what behavioural economists call 'ambiguity aversion' – aversion to the risk that there might be no reward at the end of the process.

In contrast, a study of a lottery-based intervention in Lesotho found that young women – but not young men – were significantly less likely to acquire HIV if they were entered into a four-monthly lottery after testing negative for syphilis and trichomonas on a regular basis. Lottery entrants had a 40% lower incidence of HIV over two years of follow up.

Prevention of mother to child transmission

A study conducted in the Democratic Republic of Congo found that offering women living with HIV small but escalating cash incentives for repeat attendance at antenatal clinic and uptake of prevention of mother-to-child transmission (PMTCT) services improved retention and uptake.

The study recruited pregnant women with diagnosed HIV prior to week 32 of pregnancy and randomised them to receive either cash compensation at each clinic visit or to a control group which received standard interventions for prevention of mother-to-child transmission.

Women in the intervention group were offered $5 at the first visit, and at each subsequent visit this compensation increased by $1. Compensation was dependent on attendance at antenatal clinic visits, adherence to antiretroviral prophylaxis and return at six weeks post-partum for infant HIV testing for early infant diagnosis.

The study recruited 433 women at clinics in Kinshasa during 2013 and 2014 and randomised them equally to receive either cash compensation or standard management. Intent-to-treat analysis showed significantly higher rates of retention in care and adherence in the intervention group (non-retention reduced by 30% and non-adherence to PMTCT interventions by 32%) and lower rates of loss to follow-up at delivery and at six weeks postpartum (loss to follow-up reduced by 47%).

Voluntary medical male circumcision (VMMC)―the removal of all or part of the foreskin of the penis by a trained health-care professional―reduces heterosexual male vulnerability to HIV infection by approximately 60%. Its effects last a lifetime. VMMC is also an entry point for providing men and boys with broader health packages to improve their health, and indirectly benefits women and girls.
UNAIDS
22 Oct 19
More editors' picks