What is needed to 'step up the pace' on HIV prevention and treatment? 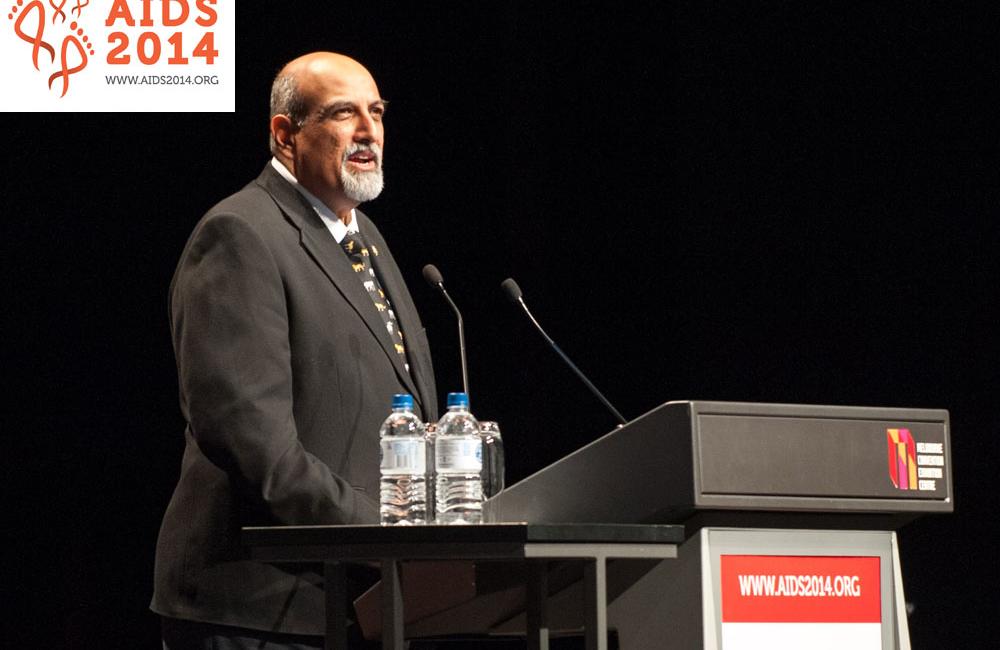 Professor Salim Abdool Karim, director of the Centre for the AIDS Programme of Research in South Africa (CAPRISA), speaking at AIDS 2014. ©IAS/Marcus Rose/Workers' Photos
This article is more than 9 years old. Click here for more recent articles on this topic

'Stepping up the pace', the theme of AIDS 2014, will require a new focus on key populations and geographical concentration of HIV, as well as intensified efforts to expand coverage of HIV testing and treatment, the 20th International AIDS Conference heard on Monday, in Melbourne.

Professor Salim Abdool Karim, director of the Centre for the AIDS Programme of Research in South Africa (CAPRISA), reviewed the global state of the epidemic and treatment access.

Despite impressive progress in scaling up condom use, counselling and testing, medical male circumcision, needle exchange and antiretroviral therapy coverage in low- and middle-income settings over the past decade, 1.5 million people died of HIV-related illness and 2.1 million people became infected with HIV in 2013 – a rate of 6000 each day.

Prof. Karim warned that the vision of the 'end of AIDS' represents an aspiration, but after important advances in biomedical prevention, epidemic control is the realistic goal. Epidemic control requires the reduction of HIV-related mortality and morbidity to locally accepted levels, so that HIV is no longer a leading cause of death. It also requires that HIV transmission be reduced so that not every HIV infection results in the onward transmission of HIV. These goals are now achievable with the biomedical prevention tools available. By combining male medical circumcision, early antiretroviral therapy and pre-exposure prophylaxis, mathematical modelling has shown that the HIV epidemic could shift from a state in which each HIV infection results in an average of three onward transmissions to one in which each infection results in less than one new transmission in the lifetime of a person living with HIV.

To reach this target, said Prof. Karim, would require a detailed knowledge of local epidemiology and the implementation of scientifically proven interventions. These interventions need to be tailored to match changes in local epidemiology, and need to prioritise key populations and 'hot spots' of HIV transmission. Men who have sex with men (MSM), for example, have a disproportionate prevalence of HIV in every region of the world when compared to the general population: in sub-Saharan Africa for example, men who have sex with men are four times more likely to have HIV than the population as a whole. Studies conducted between 2004 and 2008 found HIV prevalence among MSM ranging from 6% in Egypt to 31% in a Cape Town township.

Similarly, prevalence is extremely high among sex workers: a systematic review of prevalence surveys by International AIDS Society President-elect Prof. Chris Beyrer (due to be published in a special edition of The Lancet) found HIV prevalence among sex workers above 50% in eight countries in sub-Saharan Africa, including South Africa and Nigeria.

Prof. Karim emphasised the need for a focussed effort on key populations, especially young women in sub-Saharan Africa, who are at vastly higher risk of acquiring HIV compared to young men. A recent survey by Prof. Karim’s research group found a prevalence of 13.6% among young women aged 18 and 19 years in rural South Africa, compared to 1.5% in young men of the same age. Another age-based prevalence survey in pregnant women found that 25% of young women aged 18 and 19 giving birth in a rural South African sample between 2009 and 2012 was HIV positive, and prevalence rose to 45% in those aged 23 and 24.

Scale up of effective HIV prevention activities needs to take place in parallel with efforts to tackle the underlying social drivers of the epidemic in key populations, including stigma, legal barriers and social and gender norms, he emphasised. Stigma and legal discrimination fundamentally impede epidemic control at the very moment when the opportunity is emerging to drastically reduce new HIV infections.

View a video of this session on the conference YouTube channel.