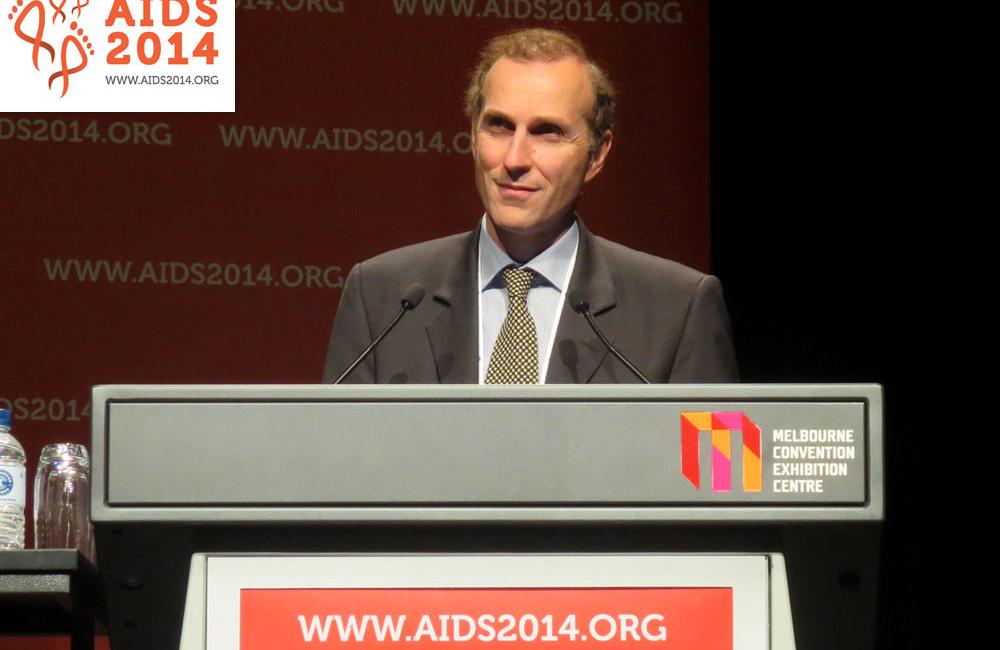 Jean-Michel Molina presents the results of PHOTON-2. Photo by Liz Highleyman, hivandhepatitis.com
This article is more than 8 years old. Click here for more recent articles on this topic

An interferon-free regimen of sofosbuvir (Sovaldi) plus ribavirin for 24 weeks led to sustained hepatitis C virological response in 84 to 89% of HIV-positive people with chronic hepatitis C genotypes 1, 2, 3 or 4, according to results from the phase 3 PHOTON-2 study presented on Monday at the 20th International AIDS Conference (AIDS 2014) in Melbourne, Australia. Cure rates were lower, however, for genotype 1a patients with liver cirrhosis.

Jean-Michel Molina from University of Paris Diderot presented data from the phase 3 PHOTON-2 trial, which included 274 people with co-infection in Europe and Australia. Most participants (81%) were men and the mean age was 47 years. The most common HCV genotypes were 1 (41%) and 3 (39%), followed by 4 (11%) and 2 (9%). Most people with genotype 1 had harder-to-treat subtype 1a.

Most participants (80%) had not been treated previously for hepatitis C. Overall, 20% had cirrhosis (13% of previously untreated, rising to 45% of treatment-experienced). Nearly half had the favourable IL28B CC gene variant.

Almost all study participants were on stable suppressive antiretroviral therapy for HIV and the mean CD4 cell count was nearly 600 cells/mm3. The most commonly used antiretrovirals were efavirenz (Sustiva, also in the Atripla co-formulation) at 25%, raltegravir (Isentress) at 23%, ritonavir-boosted darunavir (Prezista) at 21% and boosted atazanavir (Reyataz) at 17%. All used an NRTI combination of tenofovir and emtricitabine (the drugs in Truvada). Early studies found no clinically relevant drug-drug interactions between sofosbuvir and these antiretrovirals, and sofosbuvir is already approved in Europe and the U.S. for coinfected patients.

All participants received Gilead Sciences' HCV polymerase inhibitor sofosbuvir (400mg once daily) plus ribavirin (weight-based 1000-1200 mg/day). A small number of previously untreated participants with HCV genotype 2 (19 people) were treated for 12 weeks, while all treatment-experienced people and everyone with harder-to-treat genotype 1 or 4 were treated for 24 weeks.

Among the participants with HCV genotype 1, response rates were higher for people who did not have liver cirrhosis (88% overall, 87% for subtype 1a and 100% for subtype 1b) compared to those with cirrhosis (65%, 62% and 75%, respectively). Presence of cirrhosis was the only significant risk factor for poorer response in a multivariate analysis.

For people with other genotypes, cirrhosis had less impact, although the effect was a bit larger for treatment-experienced compared to treatment-naive participants with genotypes 2 or 3.

Response rates did not differ significantly between HCV subtypes 1a and 1b, but the number with the latter type was small. Likewise, there were too few people not taking antiretroviral therapy to permit a separate analysis.

The most frequent side-effects among people treated for 24 weeks were fatigue (20%), insomnia (17%), headache (16%), nausea (15%) and diarrhoea (11%). One in five developed grade 3-4 laboratory abnormalities, most commonly elevated bilirubin among people taking atazanavir. While 10% developed low haemoglobin levels – a known side-effect of ribavirin – only one person had severe anaemia.

"Sofosbuvir + ribavirin resulted in high SVR12 rates in HIV patients coinfected with HCV genotype 1, 2, 3 or 4," the PHOTON-2 researchers concluded. "Sofosbuvir was well tolerated, with a low rate of treatment discontinuations due to adverse events."

"[this combination] might be attractive in places where you don't have access to all the new drugs." Jean-Michel Molina

Results from the PHOTON-1 study were published this week in the Journal of the American Medical Association. This study tested the same regimens in people with HIV and HCV co-infection, but it was conducted in the US and had a different genotype distribution that allowed for other subgroups comparisons. Just over half had HCV genotype 1 (79% with 1a), while the remainder were roughly evenly split between genotype 2 and 3.

As previously reported at this year's Conference on Retroviruses and Opportunistic Infections (CROI), the overall SVR12 rate for people with genotype 1 was 76%. Among those with genotype 2, response rates were similar for treatment-naive people treated for 12 weeks and treatment-experienced people treated for 24 weeks (88% and 92%, respectively). Among those with genotype 3, however, previously untreated patients taking the shorter duration had a lower response rate (67% vs 94%).

The response rates in the PHOTON trials are not particularly impressive compared to the 90-100% SVR12 rates seen in several other recent interferon-free studies. Sofosbuvir works better when combined with other direct-acting antivirals such as the NS5A inhibitors ledipasvir or daclatasvir (Daklinza), which are expected to be approved soon. A disadvantage of ledipasvir is that it does not have potent activity against HCV genotypes 2 or 3.

Molina suggested that sofosbuvir plus ribavirin may be a good option for people who have HIV and HCV co-infection, with genotype 2 or 3 HCV, who do not have liver cirrhosis. "Ribavirin is generic," he noted, and this combination "might be attractive in places where you don't have access to all the new drugs."

At a separate session discussing the hepatitis C treatment revolution and how to make recent advances available worldwide, Andrew Hill of Liverpool University and others noted that pangenotypic drugs – those that work against multiple HCV genotypes – could potentially mean we will not need genotype testing, which would lower the overall cost of care.