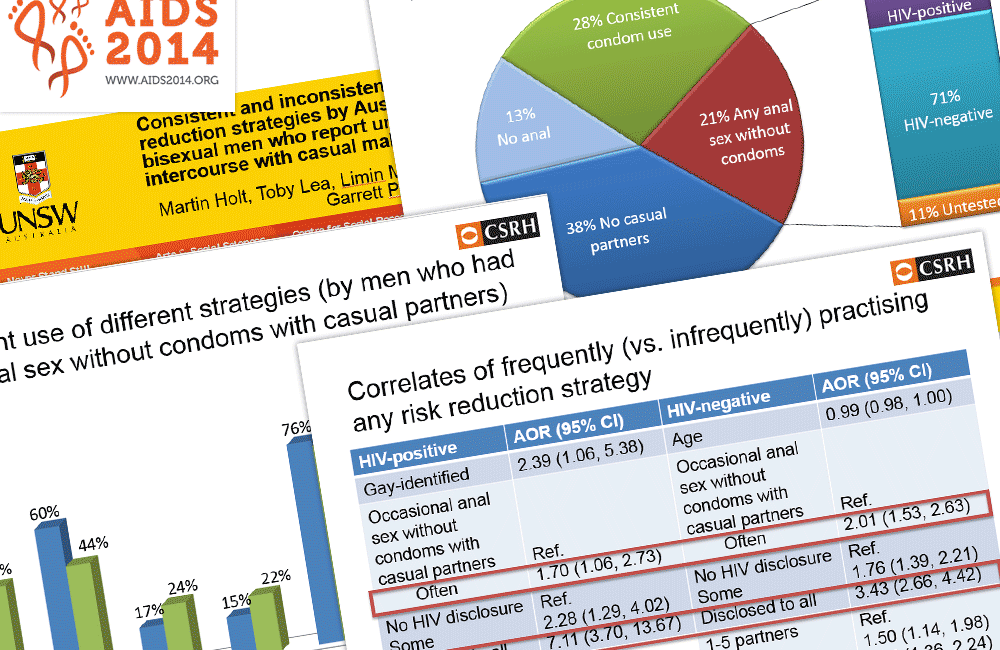 Slides from the presentation by Martin Holt.
This article is more than 8 years old. Click here for more recent articles on this topic

The study shows that a simple, black and white division of gay men into low risk ‘condom users’ and high risk ‘men who don’t use condoms’ is misleading. However that is sometimes the impression given by behavioural surveys.

Martin Holt of the University of New South Wales presented the data to the 20th International AIDS Conference in Melbourne yesterday. It is derived from an analysis of the responses to two large-scale, cross-sectional community surveys of Australian gay and bisexual men in 2011 and 2012. A total of 15,615 completed the surveys.

Moreover as risk reduction strategies differ according to HIV status, the analysis made comparisons between the 2339 men who had tested HIV negative and the 603 men who were diagnosed with HIV. The small number of men who had never tested for HIV were excluded from the analysis.

Holt was interested in risk-reduction strategies the men used “often” or “always” with casual partners, including:

HIV-negative men were more likely to report using condoms most of the time, but serosorting was still the most widely reported tactic (44%), followed by condoms (41%), strategic positioning (24%) and withdrawal (22%).

Three-quarters of men reported using more than one strategy; the strategies most commonly combined were serosorting and condom use.

There was a very strong association between using these strategies and disclosing HIV status to sexual partners. This was the case both for HIV-positive and HIV-negative men.

HIV-negative men who had a regular partner were less likely to practice any risk reduction strategy if their partner was untested or HIV negative.

Martin Holt concluded that interventions should aim to improve the consistency with which gay and bisexual men employ risk reduction strategies. Men should be encouraged to disclose their HIV status, to make effective agreements with their regular partners about casual sex and to choose the best strategy in different scenarios. Alternative approaches such as PrEP are likely to be appropriate for those men unable or unwilling to use existing strategies.