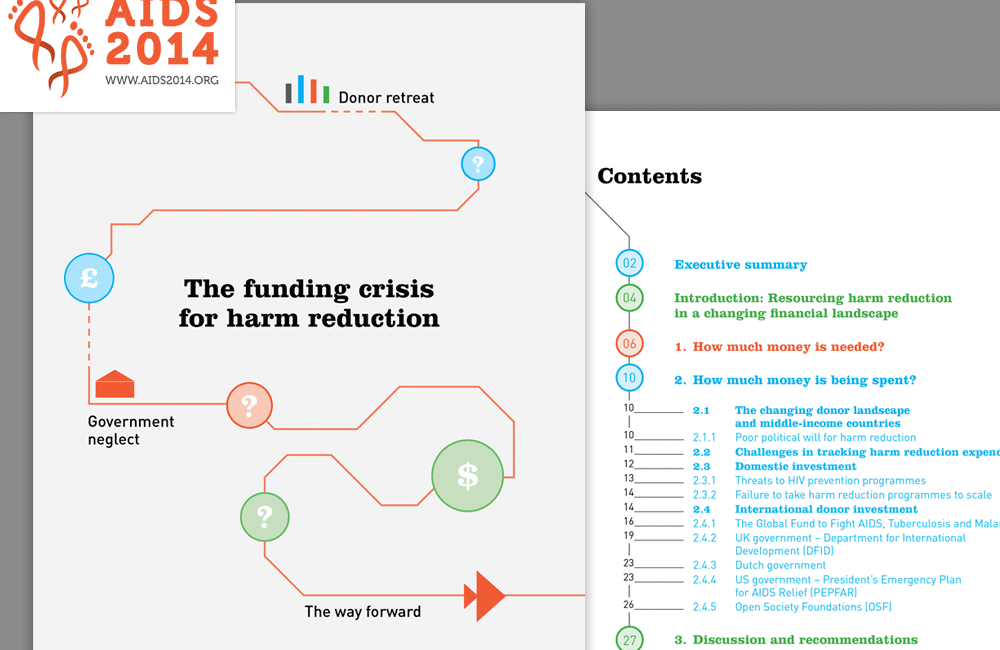 International donors are investing only 7% of what is needed to provide adequate harm reduction coverage for people who inject drugs, according to findings from a report presented on Wednesday at the 20th International AIDS Conference (AIDS 2014) in Melbourne.

A global commitment to rebalance spending on drug control and harm reduction is essential in order to achieve control of HIV and hepatitis among people who inject drugs, several speakers told the conference.

Global Drug Commissioner, Sir Richard Branson, who joined the conference by video link, said the global war on drugs had failed both in terms of controlling drug trafficking and consumption and of public health outcomes, particularly in relation to HIV and hepatitis C.

He said that the time has come to replace the criminalisation and punishment of drug users with treatment and health care.

“Drug policy reform should not be seen in isolation” Sir Richard Branson said. “It has the potential to affect change in other areas such as the world’s chronically overcrowded penal system or of reducing the negative impact of policing on some communities.

“Globally, we’re using too much money and far too many precious resources on incarceration when we should be spending this money on education, vocational training, and in the case of drug users, on treatment, proper medical care and re-entry.”

The core harm reduction measures include not only needle and syringe programmes, opioid substitution therapy, and targeted education and outreach, but also HIV testing and counselling, antiretroviral therapy, condom programming and prevention, diagnosis and treatment of sexually transmitted infections, viral hepatitis and tuberculosis.

Presenting the findings, Susie McLean of the International HIV/AIDS Alliance told conference delegates that existing coverage is extremely low. On average, just two clean needles and syringes were distributed to each person who injects drugs each month in 2010, and only 8% of people who inject drugs had access to opioid substitution therapy. In 71 countries, needle and syringe programmes are not available despite reported injecting drug use and 81 countries with reported injecting drug use do not provide opioid substitution therapy.

Since these estimates of coverage were developed in 2010, there has been little progress on the expansion of harm reduction, and the survey found some evidence of a retreat by donors from funding harm reduction, as part of a wider move away from funding health and development activities in middle-income countries. This is despite the fact that among the 15 countries considered the highest priority for tackling HIV in people who inject drugs, 84% of people who inject drugs reside in upper middle-income countries such as China, Russia, Kazakhstan, Iran and Thailand.

The United Kingdom government is also retreating from harm reduction funding and will give no direct support to harm reduction programming after 2016.

Despite a legislative ban on funding for needle and syringe programmes, the US PEPFAR programme spent approximately US$27.7 million on harm reduction in 2011. However, this represented only 2% of PEPFAR funding in the countries where support was provided; in Vietnam for example, harm reduction programming represented only 11% of expenditure despite the predominance of injecting drug use as a mode of HIV transmission in Vietnam’s epidemic.

Susie McLean said that in order to fund harm reduction adequately, the Global Fund needs to remain a truly global fund. Its funding model should be reframed to take into account national policy barriers to implementation of evidence-based measures, as well as political will to pay for harm reduction. Similarly, international donors should continue to invest where national governments won’t, using their influence to steer national funding policies towards a more equitable distribution of HIV prevention funding. National governments need to tackle the stigma associated with drug use in order to allow a more rational debate about harm reduction spending.

Most importantly, the international community needs to ask hard questions about the cost effectiveness of drug control policies. Drug enforcement spending on prisons, policing, courts and probation has been estimated to cost around US$100 billion. Even if this represents a substantial over-estimate, there is a grave mismatch between drug control spending and harm reduction spending, despite the fact that each form of spending is argued to achieve the same end – minimising the harm caused by drug use.

The funding crisis for harm reduction – download the full report.

We Can’t Beat HIV, Hepatitis and Overdoses If We Close Syringe Services

Syringe service programs are one of the most impactful tools we have to end HIV, viral hepatitis and overdose syndemics.
POZ
12 May 21
Drug policy & policing

Years ago, a syringe exchange helped end a devastating HIV outbreak in Scott County, Indiana. Now it might be forced to close.
STAT
10 May 21
People who inject drugs

Pioneers of the harm reduction response in Uganda

The drop-in centre of the Uganda Harm Reduction Network (UHRN) looks lonely from the deserted suburban pavement. It is a non-descript house, hidden behind an imposing solid pink steel gate, in an equally non-descript neighbourhood.
UNAIDS
10 May 21
Drug policy & policing

US: Do public health officials need to be political activists? A fight over an HIV crisis renews the question

This month, as West Virginia officials scrambled to prevent further spread, the state legislature all but banned one of their most effective tools for doing so: syringe exchanges that distribute sterile needles to people whose drug use places them at high risk of infection.
STAT
4 May 21
Harm reduction

‘The last brave thing that happened’: How the injecting room led the way on drug reform in Australia

The Kings Cross (Sydney) injecting room’s first medical director said she doubts the centre would have opened in today’s political environment as it was “the last brave thing that happened” in drug reform.
Sydney Morning Herald
4 May 21
More editors' picks