Efavirenz use not linked to neurocognitive impairment 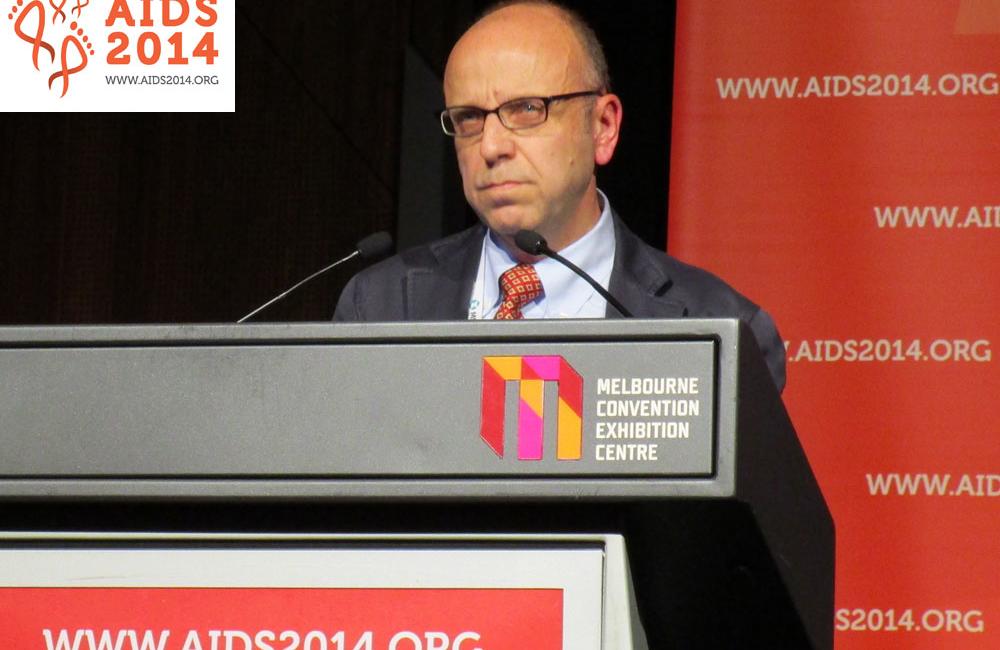 Andrea Antinori, from the National Institute for Infectious Disease in Rome, presenting at AIDS 2014. Photo by Liz Highleyman, hivandhepatitis.com
This article is more than 9 years old. Click here for more recent articles on this topic

People who use antiretroviral regimens containing efavirenz (Sustiva or Stocrin, also in the Atripla coformulation) were not at higher risk for impaired neurocognitive function, either overall or when looking at specific functional domains, researchers reported on Thursday at the 20th International AIDS Conference in Melbourne.

Efavirenz, which is widely recommended for first-line HIV treatment, has a well-known association with neuropsychiatric side-effects such as insomnia, vivid dreams, hallucinations, dizziness and poor concentration. An American study reported last year found that suicidal thoughts and death by suicide were more common among people who started treatment with efavirenz, though the overall risk was low. The association between efavirenz and neurocognitive impairment, such as problems with thinking and memory, is controversial and prior studies have yielded conflicting results.

Andrea Antinori and colleagues at the National Institute for Infectious Disease in Rome conducted a retrospective, cross-sectional analysis of neurocognitive function among HIV-positive people on combination antiretroviral therapy, aiming to determine if those taking efavirenz-based regimens had worse performance.

The analysis included 859 participants at a single centre in Italy during 2000-2013. Nearly 80% were men, the mean age was 46, and they had a median 13 years of education. The current median CD4 T-cell count was approximately 480 cells/mm3, but the nadir or lowest-ever level was just 190 cells/mm3, indicating substantial immune compromise.

All participants were on ART with 69% having undetectable or very low viral load -- a proportion Antinori noted reflects reality outside clinical trials. With regard to potential cofactors for cognitive impairment, 18% had a history of injecting drug use, 28% were coinfected with hepatitis C virus and 10% had anaemia.

At the time of neuropsychological assessment, one-third of participants were taking an efavirenz-containing ART regimen. Efavirenz users were more likely to be gay men and on average they had less advanced HIV disease, higher CD4 counts, and greater likelihood of having undetectable viral load, but were less likely to have a history of drug injection or hepatitis C coinfection. The study also controlled for clinical depression and other psychiatric conditions.

The prevalence of neurocognitive impairment did not differ significantly between people taking or not taking efavirenz. Among participants on efavirenz, 32% were classified as impaired, compared to 40% of those not using the drug -- not a statistically significant difference. No increased risk of impairment was seen based on efavirenz use in any of the specific cognitive domains.

In a univariate or single-factor analysis, current efavirenz use was associated with a decreased risk of neurocognitive impairment (odds ratio [OR] 0.71, or 29% lower risk), but this was no longer significant after controlling for confounding factors (OR 1.02). Antinori explained that this effect was probably due to the fact that efavirenz users were less likely to have cofactors for cognitive impairment.

In a multivariate analysis, the factors independently associated with increased likelihood of neurocognitive impairment were older age, HIV disease severity, injection drug use and hepatitis C coinfection. Higher education level and having a current CD4 count above 500/mm3 at the time of assessment appeared to have a protective effect. Nadir CD4 count, however, had no notable effect.

"In this large case series, efavirenz exposure was not associated with an increased risk of statistical," the researchers concluded. "Even though confounding by indication may play a role, and reverse causality cannot be ruled out, our results suggest that presence of neurocognitive impairment among persons treated with efavirenz-based combination ART is not more common than in people not treated with efavirenz."

With the expiration of its patent protection, less expensive generic versions of efavirenz will soon become available. Some experts have suggested that efavirenz should no longer be considered a preferred treatment option as newer drugs are more effective and better tolerated. But efavirenz remains a safe and effective choice for many people, and this study shows that neurocognitive problems are not a concern for those who are able to tolerate the drug.

New research in Zambia finds that children infected with HIV are significantly more likely to do worse in neurological assessments despite having well-controlled HIV disease, suggesting that they may struggle with cognitive and mental health issues.
EurekAlert
13 Oct 22
More editors' picks