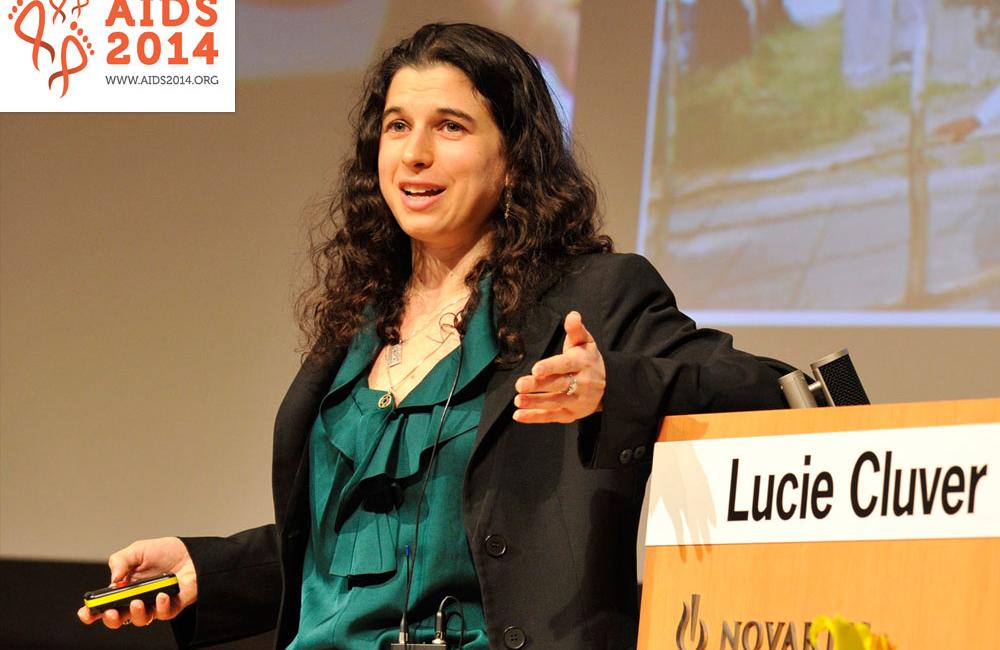 Dr Lucie Cluver of the University of Oxford. Image via www.novartisfoundation.org.
This article is more than 8 years old. Click here for more recent articles on this topic

Combining unconditional economic support in the form of government cash transfers, school feeding and food gardens, and psychosocial support (positive parenting and teacher social support) reduced incidence of HIV risk behaviour by around half for both female and male adolescents in South Africa, Dr Lucie Cluver of the University of Oxford told participants at the 20th International AIDS Conference (AIDS 2014) in Melbourne on Monday.

A longitudinal national study of 6000 South African adolescents conducted by Dr Cluver and colleagues between 2008 and 2012 found that the greater the economic and social disadvantages reported by adolescent girls, the greater the increase in female adolescent risk for transactional sex. The percentage of female adolescents having transactional sex who 1) had a healthy family, 2) had an AIDS-sick parent, 3) was abused and hungry, and 4) was abused, hungry and had an AIDS-sick parent was 1%, 7%, 13% and 57% respectively.

Benefits of social protection (for example, cash transfers, food, transport allowances, school uniforms) for families and children include better negotiation skills, improved condom use, a reduction in the number of sexual partners, and increased uptake of testing – as well as improved school enrolment and attendance, so expanding access to the “social vaccine” of education against HIV infection.

Young people in southern Africa are at high risk of HIV infection, especially adolescent girls. Recent research in South Africa found that by the age of 18 and 19, 13.6% of adolescent girls in a rural district were already HIV positive. Additional interventions to reduce HIV incidence and HIV risk behaviours among adolescent girls are needed urgently.

Adolescence is recognised as a time of significant physical, biological and psychological changes, of rapid cognitive and social development, as well as a time of increased risk for HIV. The many social and economic pressures adolescents experience further contribute to their vulnerability.

While there is increasing evidence of the positive effects of conditional or unconditional cash transfers mitigating the impact of HIV and in reducing HIV-related risk, little is known of the effects of non-cash economic support or of combinations of ‘cash and care’ (economic and psychosocial support provision).

Factors contributing to HIV vulnerability include poverty and gender inequality, as well as lack of education. Evidence suggests that poverty on its own is not a driver of HIV risk, but interacts with a number of other factors including social and economic inequalities.

In this prospective observational sub-study of a longitudinal national survey undertaken between 2009 and 2012 of adolescents and adult caregivers, Lucy Cluver and her colleagues interviewed 3515 adolescents aged 10 to 18 twice; once at baseline with less than a 2.5% refusal and at one-year follow-up with a 97% retention rate. Females comprised just over half the participants (57%).

All homes with a resident adolescent within randomly selected census areas in two urban and two rural areas in two provinces in South Africa were sampled. HIV prevalence in all sites was over 30%.

Cash plus care had the greatest impact on higher-risk adolescents, mitigating structural risks and the consequent psycho-social problems including dropping out of school, child abuse, conduct problems, psychological distress and drug or alcohol use.

Integrating cash with care had a significant impact with follow-up HIV-risk behaviour reduced from 41 to 15% for girls and from 42 to 17% for boys.

Increasing adolescent access to ‘cash plus care’ may be an effective and important real-world HIV prevention strategy in sub-Saharan Africa.

However, the observational study found wide variations in the level of coverage of different social protection measures. Whereas more than half of adolescents received a child-focused cash transfer or school feeding, only 3.7% had received support from a school counsellor and around 8% from a teacher. Furthermore, only one quarter had received 'positive parenting', a measure of positive affirmation and support from a primary caregiver.

The full study report is available in a supplement to the journal AIDS, on Children born into families affected by HIV, published to coincide with the conference.

Despite the increasing availability of adolescent-friendly services, adolescents face barriers to antiretroviral treatment (ART) adherence.
Be In The Know
2 Aug 22
HIV treatment for children & young people

Globally, only half (52%) of children living with HIV are on life-saving treatment. UNAIDS, UNICEF, and WHO have brought together a new alliance to fix one of the most glaring disparities in the AIDS response.
UNAIDS
2 Aug 22
Combatting stigma

The power of education to end HIV-related stigma and discrimination

Education is one of the best HIV-prevention tools, said Chief of Health and Education at UNESCO, Christopher Castle, with evidence showing that each additional year of secondary schooling leads to a reduction in the cumulative risk of HIV infection.
UNESCO
8 Jul 22
Support issues for children & young people

South African study finds adolescents who learn they have HIV are no more likely to experience mental health issues than those who remain unaware.
Be In The Know
1 Jun 22
More editors' picks