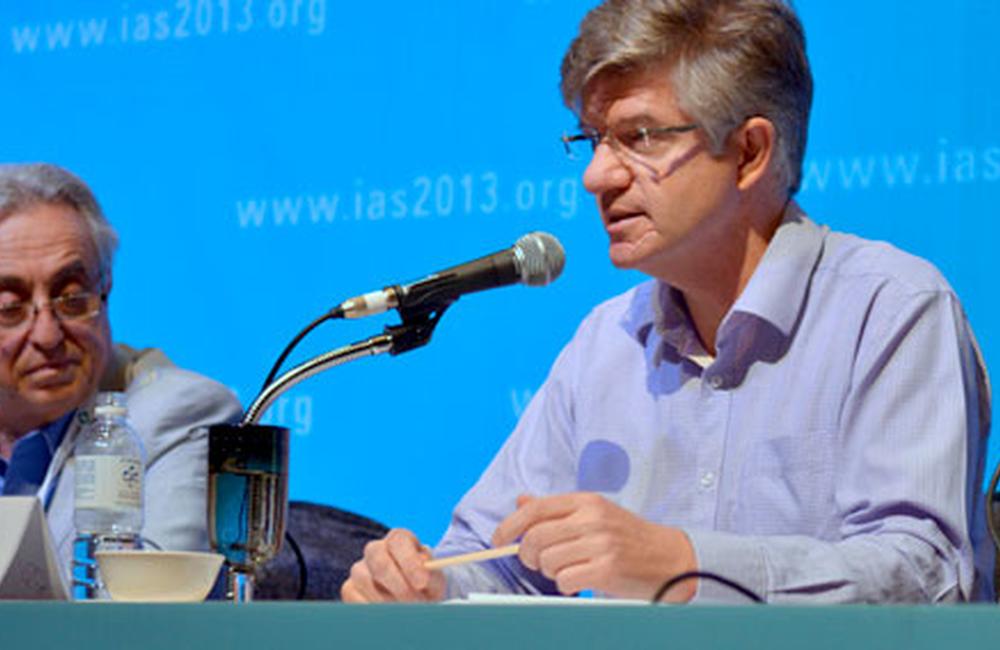 Nicholas Paton of the Europe-Africa Research Network for Evaluation of Second-line Therapy (EARNEST). Photo by Jan Brittenson, hivandhepatitis.com.
This article is more than 10 years old. Click here for more recent articles on this topic

A second-line regimen consisting of a protease inhibitor (PI) plus two nucleoside/nucleotide reverse transcriptase inhibitors (NRTIs) led to good outcomes for people with HIV in Africa after initial regimen failure, according to data from the EARNEST study presented on Wednesday at the 7th International AIDS Society Conference on HIV Pathogenesis, Treatment and Prevention in Kuala Lumpur. An NRTI-sparing regimen with raltegravir did not work significantly better, and PI monotherapy was inferior.

Large-scale roll-out of antiretroviral therapy (ART) in resource-limited settings often relies on a public health approach using standardised regimens and basic monitoring tools. While this works well for first-line treatment, the picture is more complicated for second-line therapy due to issues such as drug resistance.

Individualised therapy is hampered by limited availability of viral load and resistance testing, making it difficult to determine whether the remaining antiviral potency of previously used NRTIs outweighs their toxicity. Some research indicates that omitting NRTIs can reduce regimen complexity, cost and side-effects without compromising efficacy.

This open-label study included 1277 participants in five African countries who experienced failure of their first-line treatment. Failure was defined, using WHO criteria, based on high viral load or low CD4 cell count with viral load confirmation. Routine viral load monitoring and resistance testing were not used.

About 60% of study participants were women, the median age was 37 years and they had been on ART for four years on average. They had a low median baseline CD4 count of approximately 70 cells/mm3 at the time of randomisation and an even lower CD4 nadir of about 60 cells/mm3. About 40% had high viral load (>100,000 copies/ml) at baseline.

Participants were randomly assigned to one of the three study arms and followed for 144 weeks between April 2010 and April 2011. Almost everyone used lopinavir/ritonavir (Kaletra or Aluvia) as their PI and 80% included tenofovir (Viread) as one of their NRTIs (70% in combination with emtricitabine [FTC or Zerit]).

The researchers hypothesised that the raltegravir-containing regimen would demonstrate superior efficacy compared with PI/NRTI combinations, while PI monotherapy would be non-inferior.

Overall, participants achieved good adherence to treatment. They attended more than 95% of study visits and reported taking all their pills at more than 80% of visits. Only 1.3% of participants withdrew from the study or were lost to follow-up – a very high retention rate in this setting.

The PI/NRTI and PI/raltegravir regimens performed similarly, with 60 and 64% of participants, respectively, achieving good HIV disease control. Response was significantly poorer, however, in the PI monotherapy group (56%), leading a data safety board to halt this study arm.

Nearly everyone in the first two groups achieved viral load <10,000 copies/ml or no PI resistance mutations (98 and 99%, respectively), compared with 89% in the PI monotherapy arm. For viral load <50 copies/ml, the corresponding figures were 74, 73 and 44%, respectively.

There was a trend toward larger CD4 cell gains in the PI/raltegravir arm, with 72% attaining >250 cells/mm3, compared with 66 and 64% in the other two groups, but the difference did not reach statistical significance.

Resistance mutations were rare in the PI/NRTI and PI/raltegravir arms, but 18 participants in the PI monotherapy group showed evidence of lopinavir resistance.

All three regimens were generally safe and well tolerated. Rates of grade 3 and 4 adverse events were similar across groups: 22, 23 and 24% in the PI/NRTI, PI/raltegravir and PI monotherapy arms, respectively.

The researchers concluded that the PI/NRTI strategy led to "excellent clinical outcomes" and viral suppression – even for patients with advanced first-line treatment failure, and without using resistance testing or viral load monitoring – and "should be made more widely available for second-line therapy".

PI monotherapy, they continued, is inferior to PI/NRTI regimens, with lower viral load suppression and more resistance, and is "unsuitable for [a] public health approach".

The EARNEST results provide a "strong endorsement of WHO recommendations", Paton said. It was a surprise, he added, that recycled NRTIs appear to retain substantial antiviral efficacy with little added toxicity.