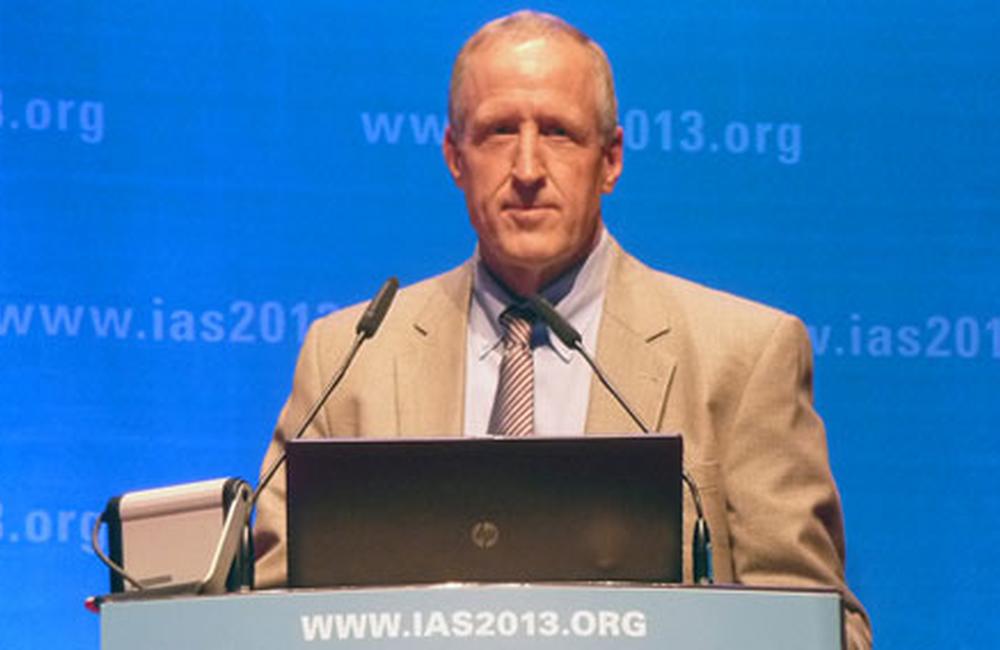 William Spreen of GlaxoSmithKline. Photo by Liz Highleyman, hivandhepatitis.com.
This article is more than 8 years old. Click here for more recent articles on this topic

A combination of antiretroviral drugs in long-acting nanosuspension formulations achieved adequate blood levels and appeared safe in HIV-negative study volunteers, offering the potential for a maintenance or PrEP option that could be taken once a month, researchers reported on Wednesday at the 7th International AIDS Society Conference on HIV Pathogenesis, Treatment and Prevention in Kuala Lumpur.

While modern antiretroviral therapy is highly safe and effective, agents that could be administered less frequently could improve convenience for people with HIV. A long-acting option could prove especially attractive for maintenance therapy once viral load is suppressed, or for pre-exposure prophylaxis (PrEP) in HIV-negative people.

William Spreen from GlaxoSmithKline and colleagues evaluated the safety and pharmacokinetics of a nanosuspension formulation GSK1265744 an investigational HIV integrase inhibitor similar to dolutegravir, plus TMC278-LA, a long-acting formulation of Janssen's approved non-nucleoside reverse transcriptase inhibitor rilpivirine (Edurant). GSK1265744 has shown good antiviral activity in a ten-day monotherapy study and is now in phase 2b development. A nanosuspension refers to tiny drug crystals suspended in a liquid, enabling it to remain active for longer in the body. Decreasing particle size increases the total drug surface area, allowing for a manageable injection volume.

This phase 1 trial enrolled 47 healthy, HIV-negative volunteers, 40 of whom received at least one injection. Just over half were women, most were white and the mean age was 40 years.

Participants were randomly allocated to four treatment cohorts. Due to limited safety data, all participants received a 14-day lead-in of 30mg/day oral GSK1265744 to assess its safety and tolerability. Following a seven-day 'wash-out' period, they then got a single 800mg 'loading dose' via intramuscular (IM) injection. After this they received:

Seven participants withdrew prematurely from the study for any reason during the oral lead-in phase and three did so during the injection phase.

In all dose cohorts, plasma drug concentrations reached levels expected to be therapeutic within three days. Levels of both GSK1265744 and rilpivirine between doses remained well above the IC90, or 90% inhibitory concentration. GSK1265744 reached concentrations that reduced viral load in a previous monotherapy study of people with HIV.

Both drugs had a long PK 'tail', meaning concentrations remained high for a prolonged period and declined slowly. In practice, this would allow for some 'forgiveness' in case of missed or delayed doses, Spreen explained.

All regimens were generally safe and well tolerated. One participant discontinued the study during the oral lead-in phase due to dizziness, and one stopped during the injection phase due to transient skin rash. Overall, headache was the most common non-injection-related side-effect. There were no reported severe (grade 4) side-effects or laboratory abnormalities and no notable electrocardiogram changes.

Most participants reported injection-site reactions such as pain, tenderness, redness or nodules, but these were mostly mild and no one withdrew for this reason. Moderate injection-site pain was more common with IM compared with SC injections, but nodules were more common and somewhat larger with SC administration.

"Co-administration of injectable long-acting nanosuspensions [of GSK1265744 and TMC278] was safe and generally well tolerated in healthy adults," the researchers concluded.

Spreen noted that a dosing-ranging study is pending, and researchers plan to look at various strategies involving oral lead-in or induction therapy with both drugs for up to six months before proceeding to long-acting injections.

CytoDyn’s efforts to get leronlimab past the regulatory finish line in any indication has been a saga—including an incident in which the biotech sent the wrong data sets to the FDA. But now, the regulator seems to have pointed the biotech in the right direction for a filing for approval in HIV.
Fierce Biotech
16 Aug 21
New & experimental HIV treatments