High linkage to care after community-based HIV counselling and testing in South Africa associated with confidence in drug supplies, depression 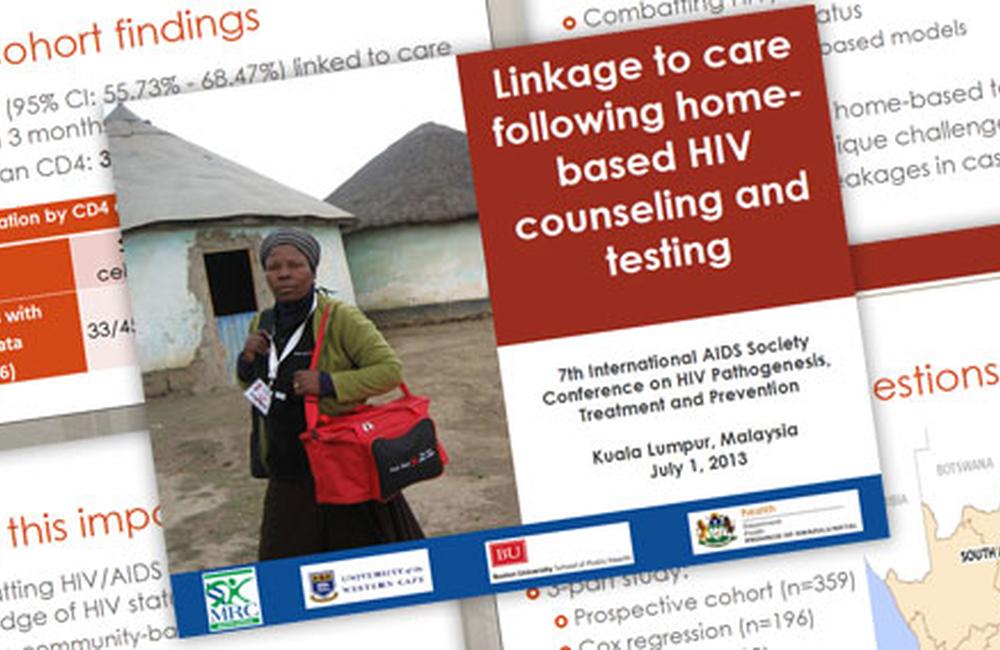 Images from the presentation of Reshma Naik.
This article is more than 9 years old. Click here for more recent articles on this topic

Believing that drugs and supplies are generally available at the local health facility and experiencing more than three symptoms of depression after HIV diagnosis were found to be associated with an increased incidence of linkage to HIV care following home-based HIV testing and counselling in rural KwaZulu-Natal, according to a study presented at the 7th International AIDS Society conference on Monday.

Conversely, younger age, living with more than two adults, not believing or being unsure about the HIV test results, difficulty finding time to seek health care, believing antiretroviral drugs (ARVs) can make you sick and drinking alcohol were all associated with a decreased incidence of linkage to care.

The authors of the study stressed that community-based treatment interventions or flexible health facility operating hours would assist in improving linkage to care.

This prospective cohort study, a sub-study of the Good Start study, is the first study to analyse factors associated with linkage to care following home-based HIV testing and counselling. To increase awareness of HIV status, national efforts are being shifted toward community-based models of HIV testing. The benefits of such programmes in terms of mortality and morbidity are best realised through timely linkage to care and treatment initiation. However, home-based HIV counselling and testing may pose challenges in terms of ensuring that people who test positive are linked to HIV programmes.

Within 2-16 weeks of home-based HIV counselling and testing (HBHCT), 196 people diagnosed with HIV were interviewed with regard to demographic characteristics and personal beliefs, knowledge, and experiences related to HIV and AIDS, the healthcare system, and HIV testing. Clients were also followed-up over time to assess the primary outcome of linkage to care, defined as obtaining a facility-based CD4 count.

Of the 196 people diagnosed with HIV, 136 (69.4%) are known to have linked to care within the year-long follow-up period. Clients who believed that drugs and supplies are generally available at the local health facility were found to be 78% more likely to access HIV care (HR1.78; 95% CI: 1.07-2.96). South Africa has been experiencing systematic ARV and TB drug stock-outs. People who were experiencing more than three symptoms of depression after their HIV diagnosis were twice as likely to access health facilities (HR 2.09; 95% CI: 1.24-3.53). This was due to people seeking information about their diagnosis.

Difficulty finding time to seek health care was also associated with not linking to care (HR 0.40; 95% CI: 0.24-0.67). Given that these clients received their HIV testing and counselling at home in a rural area, the authors of the study stressed that community-based treatment interventions or flexible health facility operating hours would assist in improving linkage to care.

Clients who believed that ARVs make people sick were 44% less likely to access health care (HR 0.56; 95% CI: 0.35-0.89). More education and awareness on the newer tenofovir-based ARV regimens, which have a better toxicity profile than older ARVs, is necessary to dispel the long-standing reputation of ARVs as toxic.

Other factors associated with linkage to care were found in a study of newly diagnosed people referred to care after provider-initiated HIV counselling and testing (PITC) in Uganda, also presented at the conference. People who were divorced (OR: 11, CI 1.45-87.33), widowed, (OR: 3, CI 0.93-9.16) and currently married, (OR: 2, CI 1.03-3.99) were more likely to be in care compared to single people. Other social demographic factors such as level of education, gender and age were not predictive of being in care.

The study evaluated newly diagnosed people identified between November 2011 and March 2012 at the Mulago National Referral and Teaching Hospital in Uganda. Telephone interviews were conducted with the patient or a significant other on a random sample to establish their vital status, socio-demographic characteristics, access to HIV care including recent CD4 cell count, and initiation of antiretroviral therapy (ART) if eligible.

View details of the conference session, Connecting the Dots: Linkage and Retention, in which these abstracts were presented, including some presentation slides, on the IAS conference website.