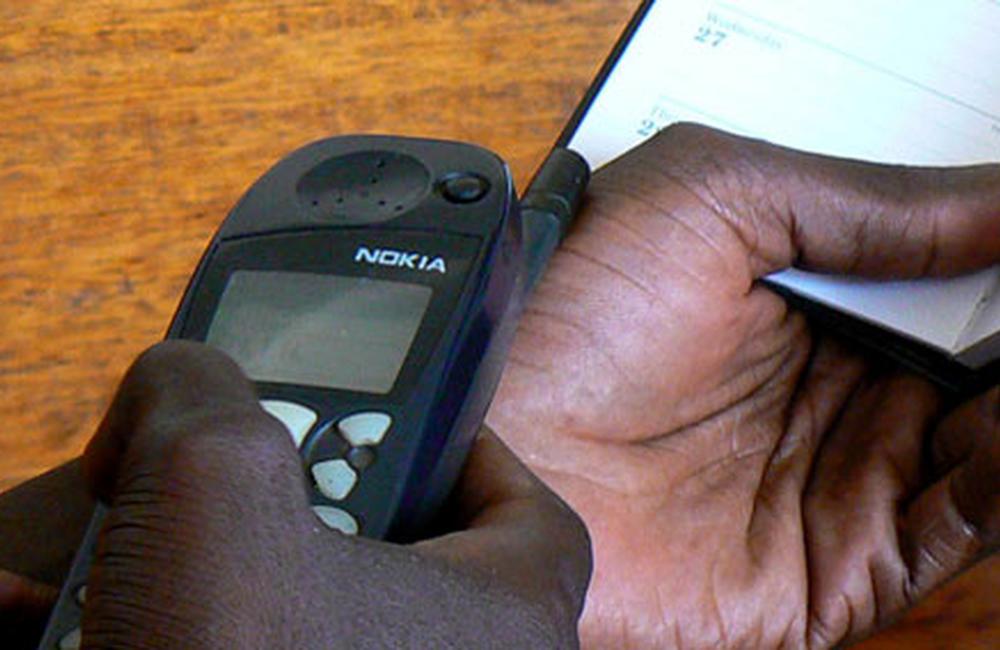 Image: Ken Banks, kiwanja.net.
This article is more than 10 years old. Click here for more recent articles on this topic

A number of studies presented at the 19th International AIDS Conference (AIDS 2012) in Washington DC highlighted potentially important roles for mobile phone technology in the delivery of HIV services.

Interest in the use of mobile technology has soared among public health practitioners and researchers in recent years, and there is a growing body of evidence regarding different kinds of programmatic experiences. A recently published Cochrane Review focusing specifically on text messaging to support antiretroviral adherence reported strong evidence of the effectiveness of this intervention.

At a conference session devoted to mobile technology, researchers considered the use of mobile phones as an adherence tool on both the local and national level, and also reported on how mobile phone systems might aid health personnel with clinical decision-making and record-keeping.

One study was implemented within the context of a healthcare program for HIV-positive infants in Haiti. It was hoped that phone communication between health clinic staff and the mothers of the infants would increase clinic attendance, improve treatment adherence and facilitate the monitoring of infant health.

The study intervention provided donated phones to 70 women; another 38 women in the study group had their own phones. Approximately once per week, clinic staff called women to discuss appointments, medication and the children’s health.

At the time of evaluation, a total of 76 women from the two groups had functioning phones. The HIV-positive children of these women had been brought to all of their last six-monthly clinic appointments. All of the women reported having positive feelings about being called by the clinic staff, and many reported that the calls were helpful reminders in relation to appointments and medication.

The study also concluded that the use of phones could reduce loss to follow-up, which is a considerable problem for many PMTCT programs.

Another research team reported on the cost of scaling up an existing mobile phone antiretroviral adherence system to the national level in India, where the national AIDS programme anticipates having 800,000 people on antiretroviral treatment by 2017. The team based its estimates on an existing program that delivers weekly mobile phone reminders – a picture message and an interactive voice response call – to 1600 people who receive HIV care at a clinic in Bangalore.

The current cost per person is US$2.82 annually. Researchers calculated that expanding the programme to serve everyone who is expected to be taking ART by 2017 would cost US$0.68 per person. At that rate, bringing the programme to scale nationally would require less than one-fifth of one per cent of India’s current five-year AIDS budget (0.16%).

Other studies looked at how mobile phone technology might be utilised to improve the performance of community health workers (CHWs). A small study provided 17 CHWs at a public HIV clinic in Nairobi with access to a mobile telephone system known as ClinipakMobile. Phones given to the CHWs featured electronic surveys to support clinical decision-making, and were also linked to an electronic patient information database.

Following a one-day training and a baseline assessment, CHWs underwent follow-up assessments at three weeks and six weeks. The assessment indicated that CHWs retained the skills required to use ClinipakMobile and that they were highly satisfied with this tool.

When CHWs used ClinipakMobile during home visits with clients living with HIV, the system recorded 'red flag' answers relating to treatment adherence, side effects and opportunistic infections. Thirty per cent of clients received health facility referrals based on ClinipakMobile recommendations.

A client chart review indicated that at follow-up visits, clinicians often failed to note the problems that had prompted the referrals. This led researchers to recommend that the ClinipakMobile system could be improved by directly informing clinicians about the content of client records uploaded to the central database.

Meanwhile, a small Tanzanian non-governmental organisation had mixed results when it sought to use a mobile phone system as a reporting tool for community health workers in rural villages. The system was designed to replace a monthly paper-based reporting system, with the phones transmitting data to a central database via SMS.

Thirty-eight CHWs received training on how to use the phones for monthly reporting. The study compared outcomes for this group to outcomes for other CHWs who continued to follow paper-based reporting procedures.

One month after the programme was initiated, CHWs using mobile phones had carried out reporting for 37% of their clients, while the other CHWs had only submitted information for 6% of clients.

At three months, outcomes were different: 79% of paper records had been submitted compared to 45% of electronic records. However, paper records were two-and-a-half times as likely to have missing information.

Regan told delegates that human resources were crucial for both establishing and maintaining a mobile phone data collection system. Her organisation’s system was put into place by someone working on a short-term fellowship, and when those human resources were lost, it became much more difficult to maintain the system.

Regan noted that her organisation’s annual budget is less than US$400,000, and that there are only 12 full-time staff and 182 CHWs. “As a small NGO, I think what we learned is that some fundamental questions need to be asked if you want to try to do data collection with mobile phones,” she said. “The first question is can you do it ­­– the issue is maintenance. If you can’t maintain a system after you’ve set it up, then it’s not very useful.

“I think the area where we probably most underestimated the challenges was with training and supervision time,” she added.

The Nairobi study presented in the same session can be seen as a compelling example of why it is important to overcome obstacles that may limit the use of mobile technology by CHWs. In her presentation of study findings, researcher Jennifer Cohn noted the potential gravity of the clinical issues that CHWs reported.

Cohn said that CHWs recorded a high number of 'red flags', during patient visits, such as noting when a patient reported a cough lasting for two weeks or longer – a possible sign of tuberculosis. CHWs referred five patients for follow-up visits because of this issue, but the chart review indicated that clinicians only noted coughing in three of these cases and apparently failed in all cases to screen for tuberculosis.

CHWs recorded 'red flags' for eleven patients for antiretroviral adherence-related reasons. The chart review only found adherence to be a concern of note in one follow-up clinic visit.

“It’s clear that CHWs are able to access and generate very important clinical information,” Cohn said. “The CHWs were able to identify patient complaints and problems that were not actually identified by the clinicians.”

Cohn speculated that reasons for this might include clinicians’ time constraints, as well as patients feeling more trusting of CHWs since they were community members.

She added that a next step in the project is to link the CHW data to clinics, enabling clinicians who see patients at follow-up visits to know about the concerns noted by CHWs.

View information on the session, with links to abstracts and slides from the presentations, on the conference website.

People with mental health conditions are more likely to get HIV, while people with HIV often struggle with depression and other mental health issues – but few countries offer psychosocial support as part of their HIV services.
Health Policy Watch
1 Aug 22
Adherence

Large-scale HIV screening and peer support to connect people who inject drugs to HIV care successfully reduced uncontrolled HIV in this population by more than 40 percent, according to a new study conducted in Haiphong, Vietnam.
EurekAlert
20 Jul 22
More editors' picks