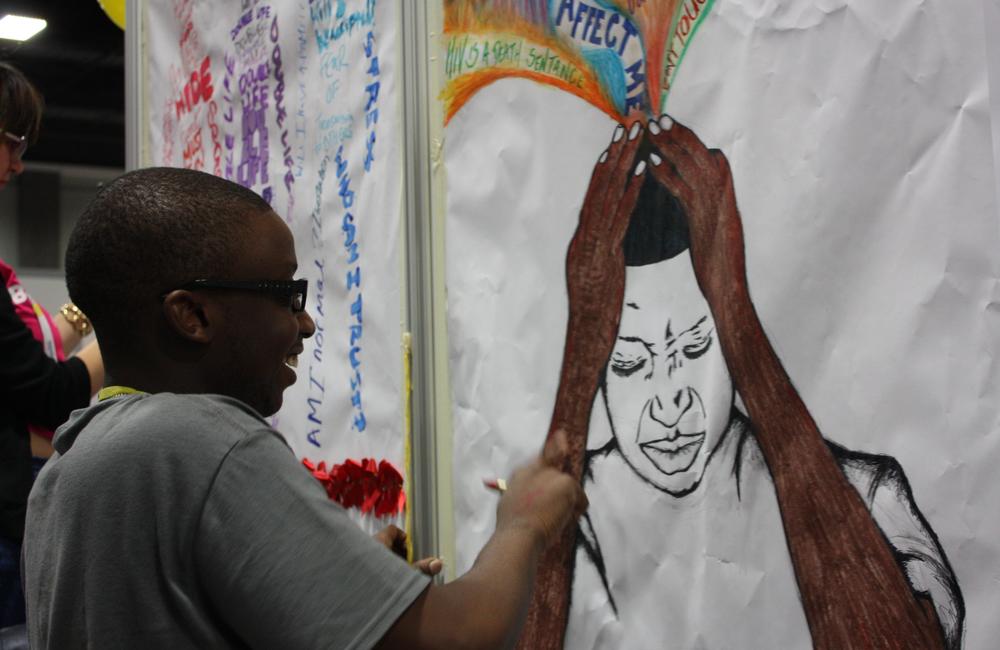 Art in action at the Life In My Shoes stand (www.lifeinmyshoes.org)
This article is more than 8 years old. Click here for more recent articles on this topic

The 19th International AIDS Conference (AIDS 2012) is not just the sum of its presentations and posters. Alongside the conference sessions, the exhibition halls and the global village have also been a hive of activity this week.

The global village is an established part of the conference, with its own programme of debates, art, music, theatre, and a wide range of organisations setting up exhibition stands.

It's a colourful, noisy, sociable place, where networking happens easily, where activists and advocates can collaborate, and where real-world experience is front and centre. Seasoned conference delegates know that the global village is worth a visit and most take time out of their planned conference sessions to visit it.

For a flavour of the global village, take a look through the photographs below.

Do-it-yourself HIV prevention: who do men buying PrEP online get support from?

Watch 40 Years of Personal Stories From the AIDS Epidemic

Developed from years of having experienced past conferences and the top-down decision-making of the IAS, community advocates and experts worldwide have rallied behind the following recommendations, which are offered in the spirit of solidarity.
HIV2020
2 Jul 20
History of HIV & AIDS

10 Lessons from HIV for the COVID-19 Response

Societies facing pandemics move through a version of Kübler-Ross’s famous stages of grief—denial, anger, depression, and so on. As the world moves from lockdown to living uneasily with this new coronavirus, here are 10 lessons we can learn from a pandemic we have lived with longer: HIV. Daniel Wolfe, director of the International Harm Reduction Development Program at the Open Society Foundations and a former ACT-UP activist, draws some lessons from the past.
Open Society Foundations
24 Jun 20
Activism & civil society

Film: Can a ‘Gay Leftie with AIDS’ Get Elected Mayor of a Rural Town?

Yves Yomb, a human rights activist from Cameroon, died on 15 June 2020. His journey to becoming an activist began in his home country, in 2006. At the height of a media campaign targeting gay men and other men who have sex with men, Mr Yomb was a founding member of Alternative Cameroun, one of the first human rights organizations in western and central Africa to advocate for tolerance and social inclusion. “We told ourselves that if we didn’t act, no one would,” he once said.
UNAIDS
18 Jun 20
More editors' picks