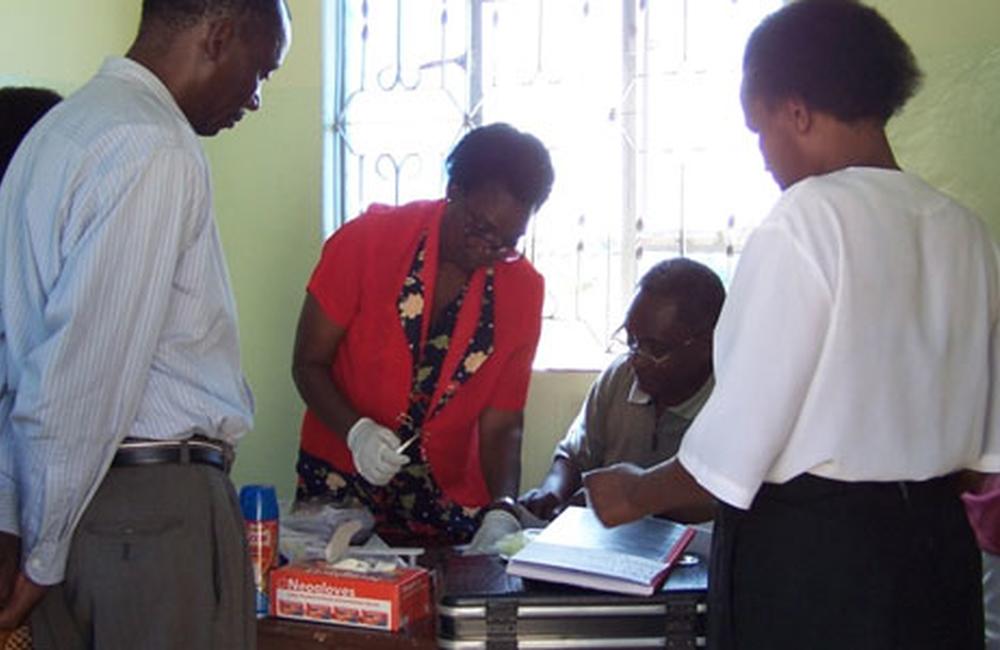 Counsellors at the project in Tanzania. Image courtesy of Elizabeth Reddy.
This article is more than 10 years old. Click here for more recent articles on this topic

A pilot project in which people with HIV encouraged their friends and neighbours to be tested for HIV succeeded in recruiting people with a very high rate of undiagnosed HIV, Elizabeth Reddy of Duke University told the Sixth International AIDS Society conference (IAS 2011) in Rome yesterday. People who themselves had just tested for HIV also recruited people for testing, but with a lower proportion of their contacts being found positive.

The project is a modification of a partner notification scheme. Partner notification involves people with a sexually transmitted infection (often when newly diagnosed) identifying their sexual partners, who will be informed of their possible exposure to infection and encouraged to be tested themselves.

Recently, pilot projects in seven American cities found that asking people with HIV to contact friends and other people in their social network who may be at risk of HIV infection (rather than sexual partners) also succeeded in bringing a large number of people with undiagnosed infection forward for testing.

The project presented at the Rome conference was established in the rural Kilimanjaro region of northern Tanzania, where the estimated prevalence of HIV is 1.9%. The project asked individuals to offer vouchers with details of testing services to their sexual partners, family, friends and neighbours.

At three villages, mobile voluntary counselling and testing services were being offered, and all eleven people who tested positive at these sites during the study period were asked to recruit others and were given vouchers. Moreover, a random sample of 312 people testing negative were provided with vouchers.

At the HIV care and treatment centre (up to 20km away), a random sample of 75 patients with HIV were also given vouchers in order to recruit others to be tested.

When recruiters passed the vouchers on to their contacts, the recipients could either test at one of the mobile sites or at the treatment centre, with travel costs reimbursed.

Looking first at the total of 323 recruiters who had themselves just tested for HIV, they accepted 702 vouchers from clinic staff, of which 46 were brought in by people seeking testing (a quarter of whom had never tested before).

One individual was diagnosed with HIV as a result.

The results were particularly impressive for the contacts of recruiters who were receiving care at the HIV treatment centre. The 75 recruiters accepted 249 vouchers, and this resulted in 41 individuals coming in for testing (over half of whom had never previously tested).

Most importantly, 13 of those tested (one third) were newly diagnosed with HIV. This contrasts with the local prevalence of 1.9%.

Although the project had aimed to encourage the testing of sexual partners, only 14% of people tested were partners. Testers were more likely to be friends or neighbours (48%).

The vouchers were linked, via a code, to the recruiter. This made it clear that not all recruiters did actually make referrals that resulted in people getting tested. In the case of recruiters from the treatment centre, successful referrals were more likely to be made by people who were somewhat older, people who had disclosed their HIV status outside the home and people who came from villages with no HIV testing facility. More people came forward to the treatment centre than to the mobile testing sites.

The researchers concluded that, when working with patients at the treatment centre, this scheme was successful in recruiting high-risk testers.

This news report is also available in French

During the COVID-19 pandemic, a Chicago hospital offered HIV screenings in the emergency room. Can such measures adequately address gaps along the continuum of care?
TheBodyPro
28 Jun 21
HIV testing programmes & uptake

South Africa needs a public health response that expands the successes of the country's HIV testing and treatment programme to provide care for multiple diseases.
The Conversation
28 Jun 21
People who inject drugs

Emergency departments and inpatient medical personnel rarely conducted HIV testing on intravenous drug users in a West Virginia county with one of the nation’s highest spikes in such cases, according to a federal investigation released Thursday.
Associated Press
25 Jun 21
More editors' picks