Boceprevir response and resistance differs according to HCV genotype 1 subtype 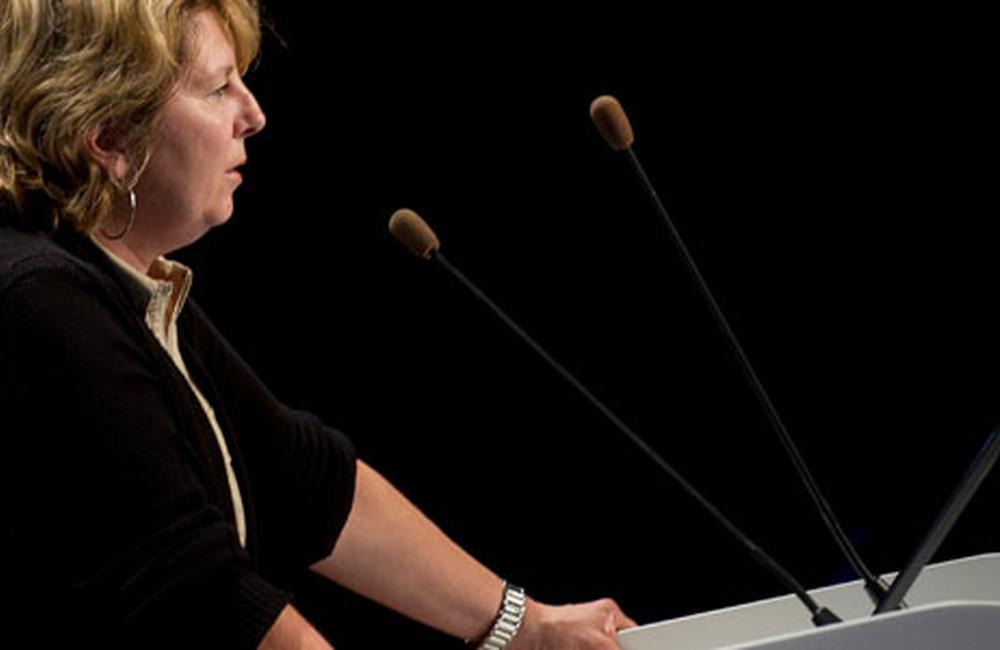 Daria Hazuda from Merck. ©IAS/Marcus Rose/Worker's Photos
This article is more than 10 years old. Click here for more recent articles on this topic

People with hepatitis C virus (HCV) genotype 1b respond better to boceprevir and are less likely to develop drug resistance than those with genotype 1a, according to study findings reported last week at the International AIDS Society Conference (IAS 2011) in Rome.

The advent of direct-acting antiviral agents has led to a paradigm shift in treatment for chronic hepatitis C. The first two drugs out of the pipeline – the HCV protease inhibitors boceprevir (Victrelis) and telaprevir (Incivek) – are used with pegylated interferon plus ribavirin standard therapy, but all-oral combinations are currently under study. As with HIV treatment, using these new agents in suboptimal regimens can lead to resistance.

Boceprevir, which was approved by the European Commission last week, improved sustained virological response or cure rates when taken with pegylated interferon/ribavirin in the pivotal Phase 3 SPRINT-2 and RESPOND-2 trials. SPRINT-2 included 1097 previously untreated patients with HCV genotype 1 and RESPOND-2 included 403 people who did not respond or relapsed after a prior attempt at standard therapy.

It is well known that HCV genotype 1 is the most difficult to treat, but these trials also revealed differences between subtypes within this genotype. Genotype 1a is predominant in Northern Europe and North America, whilst genotype 1b is more common in Southern and Eastern Europe and Japan.

Daria Hazuda from Merck and colleagues compared frequencies of boceprevir resistance-associated variants (mutations) among people with HCV genotype 1a and 1b in SPRINT-2 and RESPOND-2.

These studies, conducted mainly in Western Europe and the US, enroled HCV mono-infected patients with compensated liver disease. Individuals co-infected with HIV or hepatitis B were excluded. A majority of patients in both studies were men; SPRINT-2 included 14% people of African descent, a group that responds poorly to interferon-based therapy.

In both trials participants received a four-week "lead-in" of pegylated interferon plus ribavirin before adding either boceprevir or placebo. Some participants continued treatment for the standard duration of 48 weeks, whilst others used response-guided therapy based on early HCV viral load reduction.

Hazuda's team collected plasma samples at baseline and again near the time of virological failure if patients did not achieve sustained virological response. The NS3/4a region of the HCV genome was sequenced and major resistance-associated variants were identified.

Among treatment-naive participants in SPRINT-2, sustained response rates were slightly but consistently higher for people with HCV genotype 1b. In the 48-week triple therapy group, rates were 73% for genotype 1b vs 62% for 1b, compared to 41% and 35%, respectively, using standard therapy alone. A similar pattern was observed in RESPOND-2, with sustained response rates of 71% for genotype 1b and 64% for 1a with triple therapy, compared to 18% and 24%, respectively, with pegylated interferon/ribavirin alone.

The researchers found that resistance-associated variants were more common among people with genotype 1a, consistent with the higher likelihood of treatment failure.

The V36M and R155K resistance-associated variants were detected more often in people with HCV genotype 1a, whilst T54A/S, A156S, and V170A were predominant in patients with genotype 1b.

Hazuda explained that for certain positions in the genome it takes only a single mutation for wild-type HCV genotype 1a to become resistant to boceprevir, whereas two mutations are required for genotype 1b, giving a "biological rationale" for differences in response rates.

She further noted that people with poor response during the interferon lead-in phase defined as less than a 1 log drop in HCV RNA by week 4 of treatment were more likely to develop resistance mutations than those with good early response (69% vs 31%, respectively).

View the slides, with audio, from the presentation on the conference website.