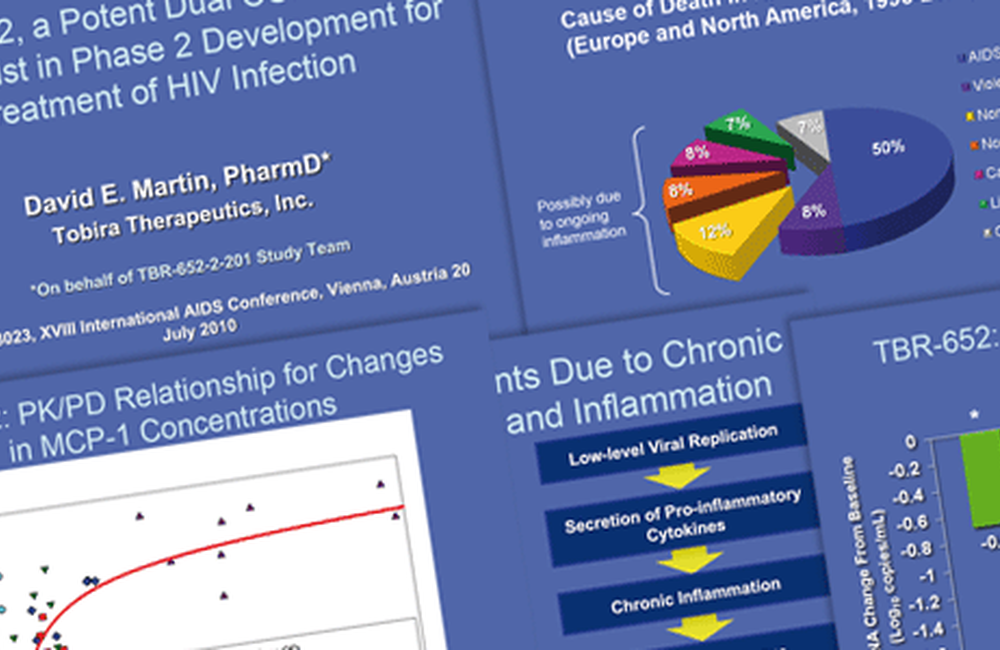 Images from presentation by David Martin, Tobira Therapeutics.
This article is more than 12 years old. Click here for more recent articles on this topic

TBR-652, a dual antagonist or blocker of both the CCR5 and CCR2 cell surface receptors, shows potent activity against HIV and also dampens inflammation, participants heard at the Eighteenth International AIDS Conference this week in Vienna.

HIV can use two different surface co-receptors – CCR5 and CXCR4 – along with the CD4 receptor to enter T-cells. CCR5 blockers interfere with this process by preventing HIV from attaching to cells. Unlike the sole approved CCR5 antagonist maraviroc (Celsentri), however, TBR-652 also disrupts attachment to CCR2.

As David Martin from Tobira Pharmaceuticals explained at the conference, CCR2 plays a role in inflammation by binding to monocyte chemoattractant protein 1 (MCP-1), a chemical messenger that summons monocytes and macrophages, types of immune system white blood cells. CCR2 has been studied in relation to a variety of inflammatory diseases including atherosclerosis and metabolic syndrome, and blockade of this receptor appears safe to date.

A growing body of evidence indicates that low-level persistent HIV infection – even in people on suppressive antiretroviral therapy – can trigger ongoing immune activation and chronic inflammation that contribute to a range of non-AIDS health problems including cardiovascular disease, neurocognitive impairment and non-AIDS-defining cancers. Eventually persistent cell activation can result in immunosenescence, or premature aging and depletion of the immune system.

Researchers designed a Phase 2 study to test multiple doses of TBR-652 monotherapy, given orally once daily for ten days. A total of 54 participants with confirmed CCR5-tropic HIV were randomly assigned to five groups receiving TBR-652 doses of 25, 50, 75, 100 or 150mg per day; the 100mg group used a slightly different formulation. Two participants in each cohort received placebo.

Most participants were men, the mean age was about 40 years, the median HIV viral load was approximately 30,000 copies/ml and CD4 count averaged 400 to 500 cells/mm3. All were treatment-experienced but had never taken other CCR5 antagonists and had been off antiretroviral therapy for at least six weeks.

As reported at the 2010 Conference on Retroviruses and Opportunistic Infections in February, TBR-652 potently inhibited HIV, reducing viral load by as much as 1.8 log in the 75mg group at the end of ten days. TBR-652 had a long half-life of 30 to 40 hours and Martin said "plenty of drug" remained at completion of dosing.

TBR-652 appeared safe and well tolerated, with no severe side-effects or significant laboratory abnormalities in any dose group. In fact, participants receiving the 75mg dose – the one that produced the largest viral load drop – reported no adverse events of any severity. One individual dropped out early but not due to drug-related reasons.

In the AIDS 2010 report, the researchers focused on the anti-inflammatory effects of TBR-652. At days 1 and 10 they measured plasma levels of MCP-1, the inflammation biomarker high-sensitivity C-reactive protein (hsCRP), and the pro-inflammatory cytokine interleukin 6 (IL-6).

MCP-1 levels rose in proportion to drug concentration in the blood, demonstrating that TBR-652 blocked CCR2 binding as expected. The average hsCRP level fell, but Martin said this was mainly attributable to a single participant with acute inflammation who had a high baseline level but subsequently showed a dramatic drop. IL-6 was undetectable in all participants, suggesting that the lower limit of the test was likely too low.

Based on these results, the researchers concluded that TBR‑652 is a potent dual CCR5/CCR2 antagonist that was generally safe and well-tolerated warranting further study in larger trials of longer duration.

Tobira expects to start a Phase 2b trial of TBR-652 in early 2011, which Martin said would look at additional inflammation and cardiovascular risk biomarkers, cell surface markers of activation and apoptosis (cell death) and clinical effects of blocking CCR2 including cardiovascular events and metabolic changes.

During a discussion following the presentation, some participants expressed concern about the potential for TBR-652 to interfere with immune response in ways that increase the risk of infections, as suggested in some prior human and animal studies of CCR2 interference.

Martin acknowledged that there is potential for greater risk – especially with exposure to high levels of an infectious agent – but emphasised that no increase in infection rates has been observed so far in human trials of TBR-625.

"I think the jury is out as to whether it will mean anything clinically," he said.