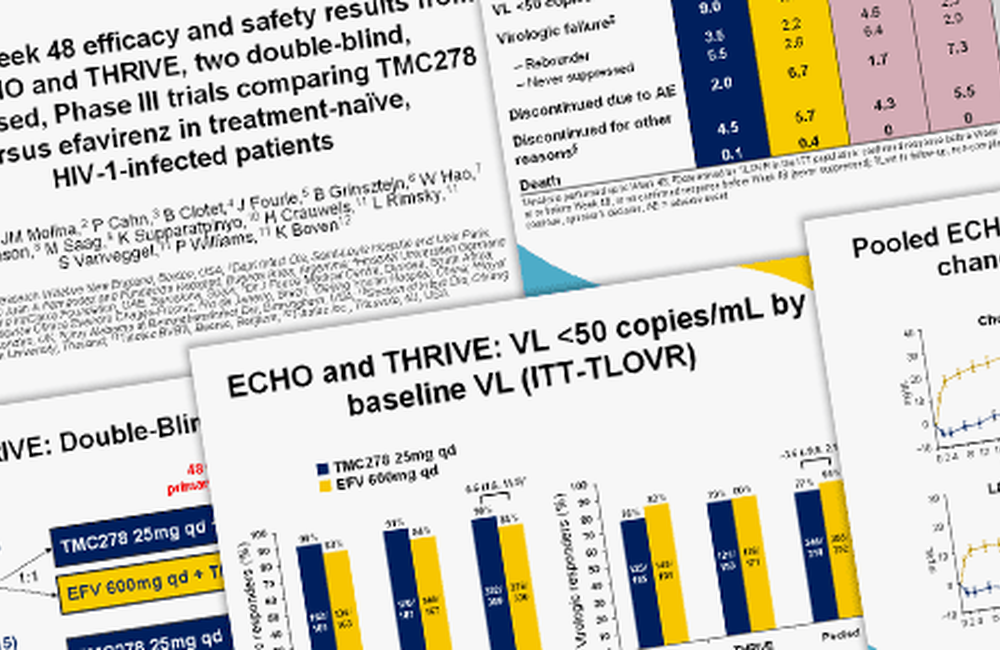 Images from presentation by Dr Cal Cohen of Community Research Initiative New England (www.crine.org)
This article is more than 12 years old. Click here for more recent articles on this topic

The new Tibotec non-nucleoside reverse transcriptase inhibitor rilpivirine (TMC278) is just as effective as efavirenz in suppressing viral load, but less likely to cause side-effects, delegates heard today at the Eighteenth International AIDS Conference in Vienna.

Rilpivirine is likely to be submitted for licensing in the United States very quickly, and will also be combined in a once-daily tablet with Gilead’s drugs tenofovir and emtricitabine.

Dr Cal Cohen of Community Research Initiative New England, Boston, presented a pooled analysis of two international phase III studies, ECHO and THRIVE, which randomised nearly 1400 people with HIV with no previous experience of treatment to receive either rilpivirine 25mg once daily or efavirenz 600mg once daily in combination with two nucleoside analogues.

After 48 weeks of treatment the proportions with viral load below 50 copies/ml were almost identical (84.3% in the rilpivirine arm, 82.3% in the efavirenz arm), a non –inferior outcome.

Virological failures, defined as two viral loads above 50 copies/ml even if viral load was suppressed again at week 48) were more frequent in the rilpivirine arm (9% vs 4.8%), and this difference was largely driven by the higher failure rate in the ECHO study (11% vs 4.4%), in which patients received a variety of nucleoside backbones. The statistical significance of this difference was not reported.

Commenting on this difference, Cal Cohen said that there was no difference in response rates according to nucleoside backbone, nor by baseline viral load

View abstracts and slides from this session on the official conference website.

People who receive opioid substitution therapy to manage drug addiction are more likely to be on antiretroviral treatment and achieve an undetectable HIV viral load, according to study findings published in the journal AIDS.
POZ
15 Sep 22
Side effects