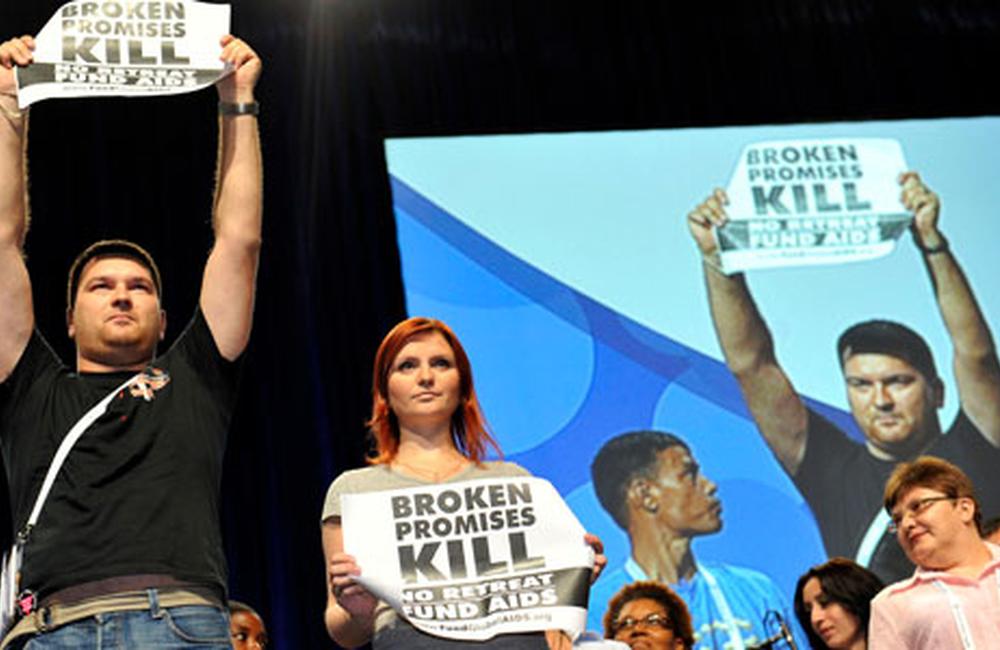 Activists occupy the stage at the opening ceremony. ©IAS/Marcus Rose/Workers' Photos
This article is more than 12 years old. Click here for more recent articles on this topic

Activists sounded a desperate warning to the world that the gains of the last ten years will slip away if donors persist in a retreat from funding AIDS.

After a march of 2000 activists to the conference hall, activists occupied the stage in a silent protest during the opening ceremony, bearing a vast banner  announcing “No retreat – fund AIDS”.

At a time when we are seeing results in HIV prevention and treatment, we must scale up, not scale down.

“I cannot hide my disappointment and deep frustration with the recent G8 and G20 meetings, by failing to take responsibility for the Universal Access pledge,and more importantly for failing to articulate next steps to meet not just the sixth Millenium Development Goal, but all of them, by 2015, the G8 has quite simply failed us," said Montaner.

“The same leaders had absolutely no problem finding the money to pay off their corporate friends, and the greedy Wall Street bankers, but when it comes to global health the purse is always empty. A full 110 billion euros appeared from nowhere when the Greek economy faltered earlier this year.”

In 2009, the Group of Eight nations, European Commission (EC) and  other donor governments provided US$7.6 billion for AIDS relief in developing nations, compared with US$7.7 billion disbursed in 2008, according to a report issued today by the Kaiser Family Foundation in collaboration with UNAIDS.

“Donor nations essentially were treading water last year on AIDS relief, but did not cut back overall as they dealt with the economic tsunami that sparked a global recession,” KFF President  Drew Altman said. “Time will tell whether support will resume its rapid growth once the global recovery takes hold.”

“Reductions in investment on AIDS programmes are hurting the AIDS response. At a time when we are seeing results in HIV prevention and treatment, we must scale up, not scale down,” said Michel Sidibé, UNAIDS Executive Director.

He called for a 'Robin Hood tax', a tax on global financial transactions, to fund global health initiatives.

The International Treatment Preparedness Coalition charged that broken promises made by the G8 nations to work toward universal access to HIV treatment and care, and to fund the Global Fund, amounted to 'bounced cheques'.

They point out that the Global Fund is being starved of funds at a point when it needs to scale up disbursement of funds just to keep pace with the demand for HIV treatment. The US government has also slowed the rate at which it is scaling up treatment programmes, leading to caps on treatment enrolment in Uganda, and fears that more countries reliant on US funding will soon follow the same path.

“There are many important discussions that will take place during the International AIDS Conference. However, in order for any of those discussions to have any relevance, all conferees must first address the growing crisis in funding for AIDS care and prevention,” said Mabel Takana, an AIDS activist with Health GAP from Cameroon.

Paula Akugizibwe, speaking on human rights at the plenary, noted that while the AIDS 2010 conference is expected to deliver around 45 million euros to the Austrian economy, the Austrian government has recently told the Global Fund that it will not be supporting the fund, despite the fact that the country’s estimated 'fair share' (based on gross domestic product) would be US$45 million per year.

Watch the opening session on the Kaiser Family Foundation website.

The world’s response to the 5-decade-old HIV/AIDS pandemic is faltering badly in the face of declines in spending and the COVID-19 pandemic, according to annual update from the Joint United Programme on HIV/AIDS (UNAIDS).
Science
1 Aug 22
Epidemiology

The NHS will identify people who may have the virus by using AI to scan health records for a number of key risk factors, such as historical blood transfusions or an HIV diagnosis.
The Guardian
1 Aug 22
Epidemiology

The COVID-19 pandemic in the United States led to disruptions in HIV testing services and access to clinical services throughout 2020. This disruption resulted in a steep, single-year decline in HIV diagnoses that is mostly attributed to declines in testing.
HIV.gov
26 May 22
More editors' picks