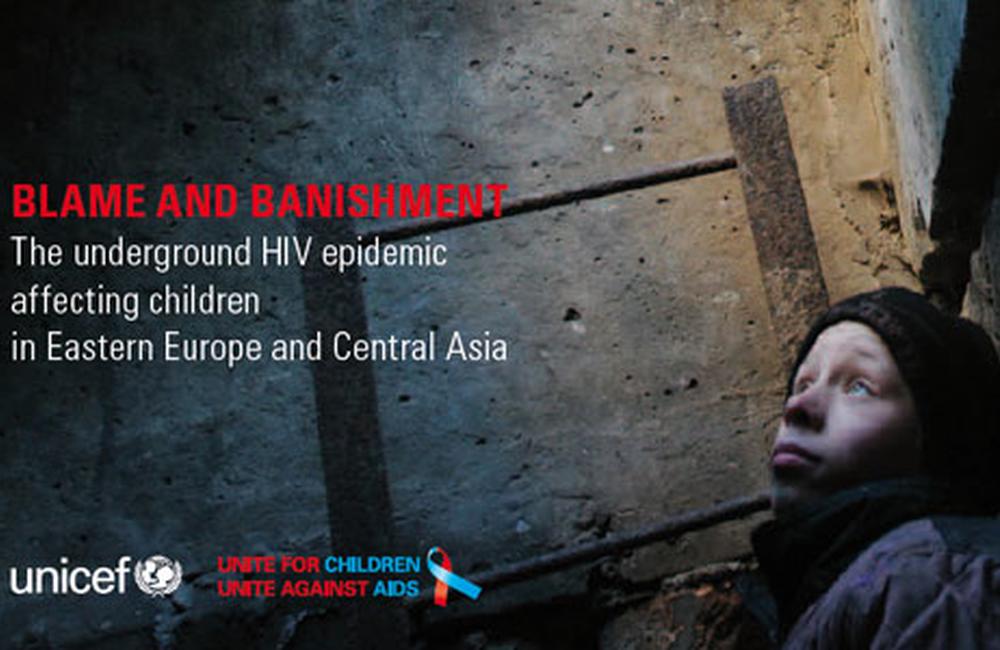 Cover of UNICEF's Blame and Banishment report. The image shows Slavik, 12, looking out from the sewer where he lived on the outskirts of Odessa, Ukraine. Photograph by Michal Novotny.
This article is more than 12 years old. Click here for more recent articles on this topic

As many as 40% of young people living on the streets in some areas of Eastern Europe are infected with HIV, according to doctors, activists and UNICEF representatives presenting at the Eighteenth International AIDS Conference in Vienna this week. While HIV rates among this population were previously unknown, incidence studies conducted over the last five years have shed new light on this burgeoning epidemic.

A report released by UNICEF on Monday (Blame and Banishment: The underground HIV epidemic affecting children in Eastern Europe and Central Asia) is the first of its kind to comprehensively outline the health, social and economic issues fueling the numbers of young people living on the street, as well as the HIV rates within the population. Studies conducted by the Ministry of Health Ukraine, HealthRight International, and the Pasteur Institute, St Petersburg all consider HIV incidence within sample populations of street youth in Ukraine and Russia. It is estimated that one million young people live on the streets in Russia, with 31,000 being picked up by police in Ukraine annually (many more live in shelters or institutions, or with vulnerable families).

Widespread stigma and social exclusion are at the heart of the epidemic. Anthony Lake, UNICEF Executive Director

Drug use, sex work, homelessness, weak health systems, and poor family situations are all central to the growing epidemic within this group. According to a Pasteur Institute 2005 survey, half of street youth were intravenous drug users (IDUs). The Institute’s 2009 survey found that 78% of those HIV-infected were IDUs. Many had also participated in sex work and/or survival sex. While boys have traditionally experienced higher rates of the infection (more boys live on the street than girls), heterosexual sex is becoming increasingly central to transmission. Both the 2005 and 2009 surveys found HIV incidence rates hovering around 30% for St. Petersburg street youth.

The crisis of HIV amongst street youth reflects increasing infection rates across the Eastern Europe. The region is currently experiencing the fastest new infection rates seen anywhere in the world, with parts of Russia experiencing a 700% increase since 2006 and Ukraine home to the highest rates in all of Europe. Social, economic, and health indicators plaguing the countries’ general population are exacerbated in the street youth population. Halyna Skipalska, director of HealthRight Ukraine, claims that poor family situations are central to HIV infection amongst young people on the streets. Citing what she calls “the crisis of family,” Skipalska says that the degradation of the family unit – through alcohol and substance abuse, poverty, and divorce – drives many young people on to the street.

Many young people choose to leave their family homes even if they are not technically orphaned. While only 15% of those surveyed in the HealthRight Ukraine study had no family, many young people spent one or two days on the street two or three times a year, spending the rest of their time in family homes or on government programmes. Roman Yorick of HealthRight Russia presented similar statistics, with only 13.4% of survey participants classed as orphans but most living on the streets two or three nights a week.

Health care providers and organisations working with street youth see several challenges in this work: these young people are often extremely hidden, mobile and seasonal; criminalised; and experiencing psychosocial disorders, according to Skipalska. Many street youth find it difficult to access health and other services because of their marginalised position in society, further perpetuated if they are HIV-positive and coupled with distrust of officials because of harsh treatment by police and other authority figures. “Widespread stigma and social exclusion are at the heart of the epidemic,” says UNICEF Executive Director Anthony Lake. Lack of support within health care settings for young people living on the street and those with HIV is a reflection of the “prejudice and fear of the larger societies”, he says.

Tatiana Smolskaya of the Pasteur Institute notes that young IDUs living on the street are often much more difficult to work with than adult drug users, given their age, lower education levels, social disadvantage, and homelessness. Advocates note Russia and Ukraine’s poor harm reduction programmes, which are especially inaccessible to young people. The absence of a legal definition for 'youth' is also central to many people falling between the cracks: since they are not technically considered either children or adults, they cannot access services targeted at either group.

Regardless of the many challenges presented when working with street youth, Skipalska notes, “street…youth can be reached with HIV prevention, testing, and support services,” especially through community-based approaches. Both UNICEF and UNAIDS have pledged that this issue will “become central to global action,” according to Michel Sidibé, UNAIDS Executive Director.