Clinton: it's the 'end of the beginning' of the AIDS epidemic 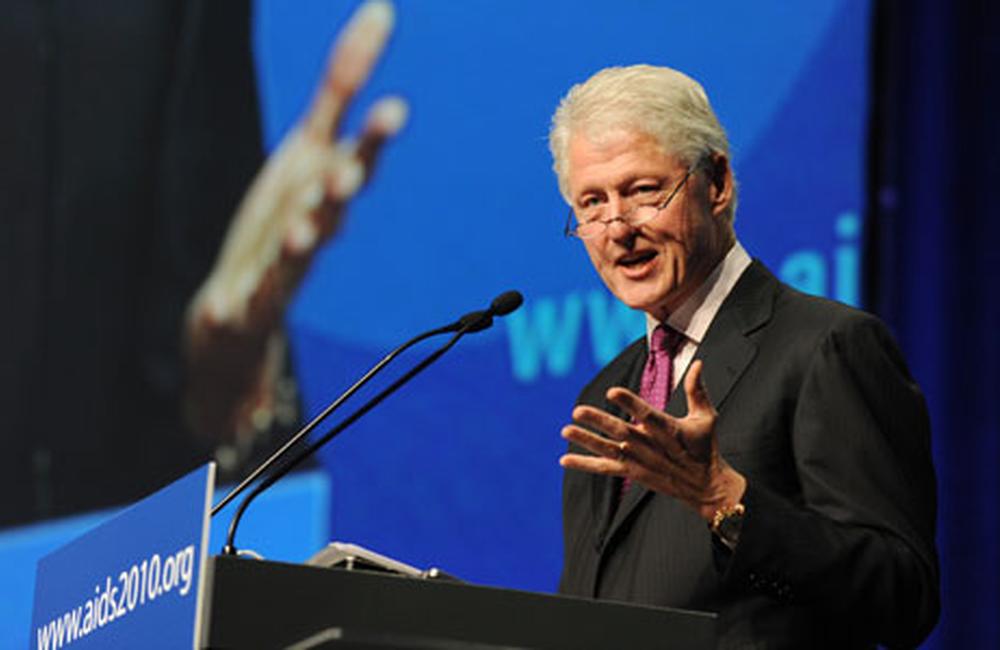 AIDS is no longer an emergency to be met with a “make-it-up-as-you-go” response, ex-US President Bill Clinton told the Eighteenth International AIDS Conference in Vienna today.

It needs sustainable funding that is secure from economic downturns, but also needs to achieve efficiencies of scale and delivery if we are to continue gains we have made this decade.

The annual global AIDS budget had risen since 2002 from $6 billion to $16 billion a year; there were now 5.2 million people on antiretroviral treatment; global HIV prevalence had fallen by 17% in the last decade; and the proportion of people with HIV in low- and middle-income countries who knew their HIV status more than doubled from 15% in 2005-6 to 39% in 2007-8.

He said he was “thrilled” about developments in South Africa, where HIV incidence in young women aged 16 to 24 had declined by 60% – see this report.

However, he also pointed out that still only a third of the people who needed treatment were receiving it and that the main challenge the world’s people with HIV faced was ensuring that the momentum towards comprehensive treatment and prevention was maintained through the current financially difficult times.

“We knew the economic crisis would challenge our ability to keep the AIDS movement going,” he said.

The primary subject of Clinton’s speech was how to achieve greater financial efficiency and economy of scale in a situation in which global AIDS funding was likely to be held static for the next couple of years.

Clinton said government funding was unlikely to increase in the near future, and defended his successor Barack Obama who has been accused of breaking promises by flatlining AIDS funding. He praised initiatives like UNITAID, the treatment-funding initiative partly financed by an air-travel levy, and its new offshoot MassiveGood in which individuals can make voluntary donations when booking travel.

“The best way to raise private money once you get past Bill Gates is to raise a massive amount of money in small amounts, by user-friendly means,” Clinton said.

Private individuals were willing to fund HIV if it did not take too much effort to do so: a non-HIV related example had been the US response to the recent Haiti earthquake, in which people could simply donate by texting HAITI to a number which would add the cost of their text to the earthquake appeal.

Clinton praised UNITAID, which funds Clinton’s own Health Access Initiative (CHAI), for successfully bringing down the cost of second-line therapies for low-income countries from $1000 a year to $435. However, he said he saw little immediate chance of further reductions in the cost of first-line therapy from the current $90, except in improved pricing for tenofovir-containing fixed-dose combinations.

We knew the economic crisis would challenge our ability to keep the AIDS movement going, Bill Clinton, former US President

Any further reduction in the cost of treatment to low-income countries would therefore have to come from more efficiency and lower distribution costs. He praised ‘task shifting’ programmes, in which nurses were trained to do tasks formerly performed by doctors and community health workers the tasks of nurses. He commended South Africa’s community health worker programme and was applauded when he said that South African President Jacob Zuma “is proud that his country is no longer a pariah in the fight against AIDS – and I’m proud they saved $300 million”.

Small and local should be beautiful in the future, he added. “We need to work with local organisations that can deal with things much more cheaply with fewer overheads. At present in HIV there are too many meetings, too many progress reports and studies that sit on shelves.”

He added, however, that health economists had never really factored in the true savings due to keeping an economically active person alive for 40 more years instead of five. He pointed out that, in the USA, people building a nuclear power station could pay the cost by instalments over the forthcoming 30 years because it was recognised that power stations more than recouped their costs over that period.

“Healthcare is not just a right,” he said, “It is an extraordinarily high-value development investment with a high rate of return.” He criticised the US pharmaceutical industry for not reducing its prices so that 1700 people with HIV in the USA could be taken off waiting lists for antiretrovirals.

“The drug manufacturers have been paid $10,000 a year per patient by the government for years for Medicaid programmes,” he said. “They could take care of those 1700 people tomorrow and never miss the money.”

Clinton was critical of the "false dichotomies" that had created tension in the last few years, in which some global health advocates had claimed that progress towards other UN Millennium Development Goals such as maternal and child health had been harmed by HIV claiming by far the largest slice of global health funding.

“This rivalry is a movie we’ve seen before,” he said, drawing parallels with arguments in the late 1990s that the cost of treatment would drain the money from prevention programmes, and to the perennial claim that harm reduction programmes damage the fight against illegal drugs.

“It’s no coincidence that child mortality has gone down 35% and maternal mortality 20% in the decade of The Global Fund,” he said, and drew applause when he added that “now we know that the more harm reduction we offer, the more drug use does down.”

He reserved his harshest words for politicians who are reluctant to target prevention and care to marginalised groups: “There are still places where the main source of the HIV epidemic is MSM and the politicians still deny they exist. There are still paces where IDUs are not dealt with beyond the first bump in the road.”

Clinton finished by running through six priorities global AIDS funding needed to achieve if the momentum towards global treatment and prevention was to be continued. These were to avoid false choices between different disease areas; to strive for lower drug costs; to target prevention efficiently; to enact “disciplined, honest, no-backside-covering ways to save the costs of drug delivery;” to create better private donation and investment structures; and “to educate people why this is good.”

“Our only chance,” he concluded, “is that the positive forces fighting HIV are just that little bit bigger than the negative ones.”

“There has been great progress in getting patients who are entering HIV care on treatment as soon as possible in the ‘treat all’ era, as shown by substantial declines in time to ART prescription and increases in CD4 count at ART prescription from 2005 to 2018. In contrast, increases in CD4 count at entry into care over the same time period were relatively modest.”
Healio
25 Jan 21
Epidemiology

Ireland: Fall in number of people diagnosed with HIV or STIs

The number of people diagnosed with HIV or a sexually transmitted infection decreased by more than 25% last year.
Irish Examiner
13 Jan 21
Coronavirus

Data reported to UNAIDS by countries have been used to project the potential impact of the COVID-19 pandemic on the global HIV response over the next five years. Several scenarios with different durations of service disruptions of between three months and two years were modelled.
UNAIDS
14 Dec 20
Epidemiology

New HIV data, released today by the Kirby Institute at UNSW Sydney for World AIDS Day, are a reminder for Australia to sustain its efforts in HIV prevention amidst the COVID-19 pandemic.
University of New South Wales
1 Dec 20
Epidemiology

While Central African Republic (CAR) is considered a low HIV prevalence country compared to many southern African countries, it is in a particularly critical situation, fuelled by extreme poverty, pervasive violence, a dire shortage of health facilities and health staff, long-existing supply chain issues for lifesaving antiretroviral (ARV) medication, and significant barriers to early detection and care for the people of CAR.  As a result, HIV remains a leading cause of death in the country.
MSF
1 Dec 20
More editors' picks