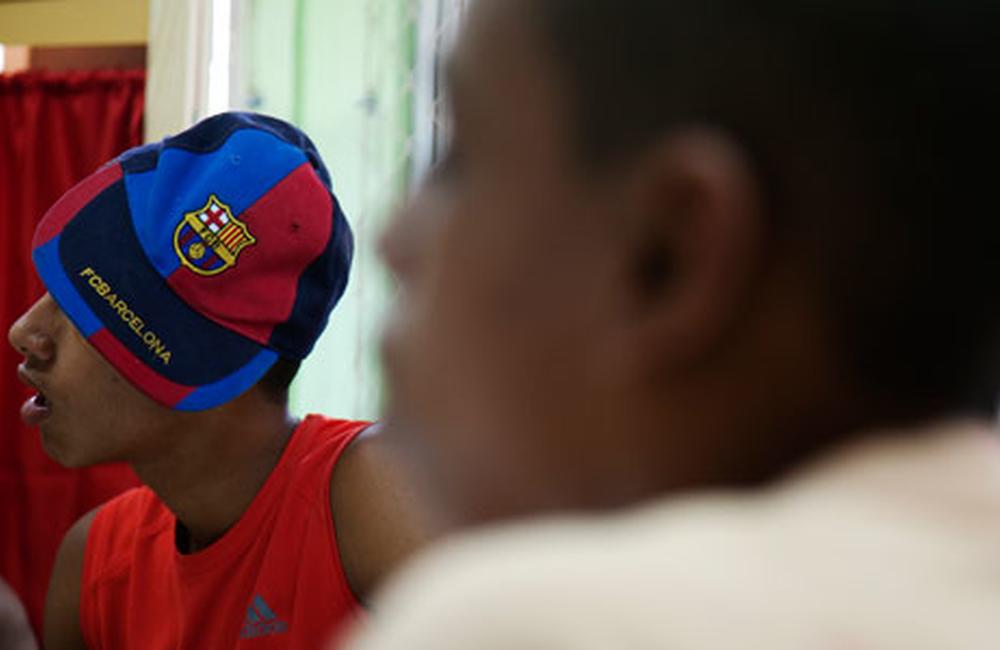 The Pela Vidda project in Brazil works with around 150 children and young people. (Image: Eduardo Martino/Save the Children/Department for International Development. Creative Commons/via Flickr)
This article is more than 11 years old. Click here for more recent articles on this topic

As the number of young people living with HIV increases internationally, new and innovative ways to talk about sex, disclosure, and health need to be developed for HIV-positive adolescents.

According to a panel presenting at the Eighteenth International AIDS Conference in Vienna, the needs of adolescents living with HIV are much more sensitive and varied than those of adults, as they must simultaneously deal with 'adult' issues like disclosure, practicing safe sex, and adhering to treatment, while also addressing issues traditionally associated with adolescence, such as body image, first sexual experience, peer pressure and forming personal identity.

Jasna Loos of the Institute of Tropical Medicine in Belgium presented the findings of a formative needs assessment conducted amongst HIV-positive young people in Kenya and Uganda. Considering the categories of body image, sexual identity, increased importance to peers, envisioning the future, and independence – all central themes within adolescent development – Loos noted that HIV-positive young people concurrently felt empowered and excited about growing older, while also being weary of the potential restrictions and increased responsibility resulting from their HIV status.

Disclosure proved to be a “pivotal step in their lives”, often resulting in positive life changes

With regards to body image, respondents felt that puberty and growth offered a new start and chance to transform from a social outsider to that of a social insider, as those previously sickly in appearance and smaller than their peers grew into healthy adults. Peer influence was central to understanding sexuality, sexual norms and identity, with positive adolescents attempting to mirror so-called 'normal' behaviour. Due to notions of AIDS as a deadly virus, Loos notes that many adolescents “lived in the moment” and wanted to get “the most out of a life with HIV”. In reality, this often resulted in early first sexual experience, as young people “did not want to die without having sex”.

Loos notes that, as yet, there are few evidence-based interventions to help positive adolescents in coping with such issues. Based on the findings of the study, she suggests that sexual and reproductive health be fully integrated with HIV services, specifically by building upon existing resources; that providers focus on a holistic approach and do not rely on 'one-size-fits-all' programmes; and that service providers focus on building trust with adolescents.

Sabrina Bakeera-Kitaka from Kampala’s Mulago Hospital discussed adolescents’ experiences in disclosing status to their peers, friends and family. A study conducted at Mulago assessed the experiences of ten men and ten women who were taking ART, and followed them through the process of disclosure. Partner disclosure proved to be most challenging for the participants, who cited fear of rejection, and loss of respect and care, if their status became known. Participants also said that they did not want to disclose to their family members in order to protect them from “distressing information”. Generally, however, disclosure proved to be a “pivotal step in their lives”, often resulting in positive life changes including increased care and support, both financial and emotional.

In addition to psychosocial and behavioural concerns, a recent study conducted at the Family Care Center at Harlem Hospital in New York City looked at the effects that the virus has on neurocognitive functions among HIV-positive adolescents living in a poor, urban area. While several other studies have focused on neurocognitive and behavioural effects from viral infection, questions have arisen as to whether these effects stem from HIV and opportunistic infections specifically or, rather, are a result of social factors affecting those most affected by the virus – such as poverty, poor education, and single-parent households. Affected neurocognitive functions include fine motor strength, language, executive skills and memory, academic achievement, and general cognitive ability.

The Harlem study attempted to consider the “neighborhood question” by assessing neuropsychological test results, ART regimen, CD4 count and demographic information amongst adolescent patients. While all study participants displayed some sort of learning or behavioural disorder, the study found that “environmental influences on neurocognitive functioning may be negligible given the impact of advanced HIV infection and psychiatric illness.” As such, high rates of psychiatric illness among HIV-positive adolescents require increased prevention and intervention strategies.

Interestingly, panelists noted that differing experiences for adolescents generally depended on whether an individual was infected through neonatal or postnatal exposure. However, this is currently an anecdotal observation, and requires further exploration before conclusions can be made.

Treatment adherence also poses a significant challenge for adolescents living with the virus, regardless of how they became infected. Ana-Maria Schweitzer of the Baylor College of Medicine, highlighting her work in Romania, noted that 60% of adolescents will struggle with adherence at some point. In her study, adherence was affected by misconceptions surrounding the need for good adherence, as well as by fears of unwanted disclosure and frustrations stemming from a sense of limited freedom associated with a treatment regimen.

Of central concern to young people living with HIV is the question of transition in treatment throughout the adolescent years. Bakeera-Kitaka’s Mulago Hospital currently houses a 'transition clinic', which attempts to facilitate patients’ movement from child to adult care. This programme has seen the majority of patients successfully making the transition from one to the other. However, more research and discussion is needed to understand best practices in this regard.

Presentations and their related abstracts are available on the official conference website.

Loos J et al. 'We are adolescents, and we live with HIV.’ Perceptions and challenges towards life with HVI among HIV-positive adolescents in Kenya and Uganda. Eighteenth International AIDS Conference, Vienna, abstract TUAX0104, 2010.

A coercive legal environment and the violence experienced by key populations impacts the HIV epidemic in Kyrgyzstan because fear stops people from seeking and adhering to HIV prevention, treatment, care and support services. Nonetheless, in July 2021, adolescents living with HIV in Kyrgyzstan who were infected in state medical institutions between 2006—2009 filed lawsuits against the state for compensation for moral damage. Families who had battled for justice for more than a decade were given hope when lawyers won a case and a child was awarded $23,000 in compensation.
UNAIDS
10 Aug 21
Support issues for children & young people

Use HIV's lessons to help children orphaned by COVID-19

I have spent my career studying how the HIV epidemic affects children. One profound way is through the death of one or both parents — the United Nations definition of an orphan. I never thought that my expertise on pandemics and mass child bereavement would be relevant to the United States. And then the COVID-19 pandemic hit. As I saw the daily death counts grow, I worried about the children being left behind.
Nature
9 Aug 21
Support issues for children & young people