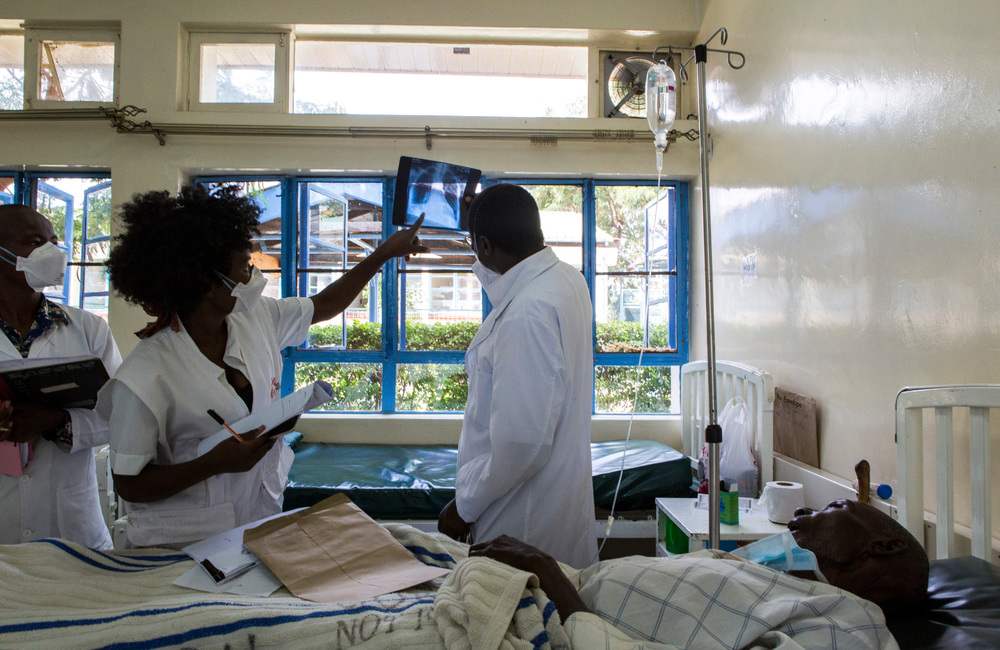 A patient and staff in the TB ward of Homa Bay Hospital, Kenya, where the study was conducted. TB is the leading cause of death among AIDS patients. Image by Patrick Meinhardt.

Hospitalised patients with advanced HIV in the Democratic Republic of the Congo (DRC) and Kenya sought care multiple times as their health declined without receiving adequate services. In both countries, they ‘slipped through the cracks’ of health and social support structures, missing opportunities for timely management of HIV. This is according to qualitative research carried out by Dr Rose Burns from the Médecins Sans Frontières (MSF) and colleagues, published in AIDS Care.

The study explored the pathways of care among hospitalised patients to understand their care-seeking trajectories prior to hospital presentation. Social and economic stresses, complex care journeys as they engaged with multiple services over time, and the burden of daily pill-taking alongside overly strict messaging around treatment and illness, marked the road to hospitalisation. Despite its benefits, decentralisation of HIV care into primary health centres also contributed to delayed referrals or inadequate management of some patients.

People with HIV who have a CD4 count below 200 or certain symptoms are described as having ‘advanced HIV’, a term that is often now used instead of ‘AIDS’. Advanced HIV is now increasingly seen amongst treatment-experienced patients in sub-Saharan Africa. Engagement with care is often cyclical, with an estimated 25% of people living with HIV on ART interrupting their treatment at some stage. Between 65 and 78% of advanced HIV patients presenting at two hospitals in Kenya and DRC (where this study was undertaken) with severely immunocompromised states were ART experienced, and up to a quarter died within 48 hours of hospital admission.

While a wealth of literature exists on the tensions between the lived realities of people living with HIV and the features of HIV programmes, few studies have explored the perspectives of hospitalised people with HIV in African settings. Given high mortality rates, there is an urgent need for more research to understand “what went wrong” in patients’ interactions with treatment and care services.

The researchers interviewed 30 hospitalised patients with advanced HIV in two hospitals supported by Médecins Sans Frontières (MSF). Fifteen in 2017 in urban Kinshasa, DRC, and 15 more in 2018 in rural Homa Bay, Kenya. Advanced HIV was defined as having CD4 count of less than 350 on presentation to the hospital.

The majority of interviewed patients (21) had a CD4 count of less than 200, 16 had a viral load (amount of HIV in blood) of over 1000 and 17 had been on ART for more than four years. The patients had a median age of 40 years in Homa Bay and 39 years in Kinshasa. Because of severe sickness, the experiences of patients with the lowest CD4 counts were not captured. The interview covered participants’ experiences of illness since their HIV diagnosis, their health journeys, experiences with treatment and pathways of care.

In both sites, participants usually self-presented at the hospital after their health had severely deteriorated. The three major themes that characterised their pathways to hospitalisation were multiple and complex care journeys, social and economic stresses,  and the burden of daily pill-taking and the messaging around treatment and illness.

Participants reported multiple attempts to seek help for their condition either at facilities where they normally received HIV services, or at other sites such as government clinics, primary health facilities, dispensaries, and sometimes, from pharmacies. Most eventually self-presented at a hospital, revealing a pattern of inadequate referral as their health deteriorated.

“I had taken ARVs for about a year, then a wound appeared on my head. I went to Nyatoto, but I did not get healed… ‘Go to Nakuru there are dermatologists there’… they gave me ointments and oral drugs… go to a hospital… a (sample) was to be taken to India for testing… I was being told to go to Eldoret… I went to Alupe and they gave oral medication and ointment. I did not get healed… why was I wasting money? I just bought the drug from the chemist… the pain was too much. I felt I was dying.”

More news from Congo, The Democratic Republic of The

Repeated hospitalisation was also common, with some participants too sick to collect their treatment, thus deteriorating further, without adequate post-discharge care or support. Decentralisation of HIV services to community sites in Kinshasa meant that out-patients sometimes waited until their next scheduled appointment to seek medical advice if they were sick.

Some participants reported negative or critical responses from health workers over poor adherence or missed appointments, and some felt intimidated to return to care if they had previously disengaged from a service:

“I made them angry since I could miss my appointed dates… sometimes they even closed my file. When they got angry, it was my mum who used to talk to them, then they allowed me into the system again”.

Some participants accepted HIV as a lifelong, chronic disease, and they perceived less urgency to seek regular care unless their symptoms were severely affecting their daily life.

Interviewees often listed multiple, severe and prolonged symptoms that resulted in their admission to hospital:

“I weighed 75 kilos: because of the disease I lost weight down to 42 kilos and then I weighed in here [at hospital] at 39.”

The patients in both settings had often used their limited resources on medical care without recovering from prior illnesses, leaving some to worry about how they would cover the costs of the hospital treatment.

“My treatment is going well, and I am getting better, but when they will ask me to pay the bill, I will be stranded.”

Participants also linked their mental health to their severe symptoms and dependence on others. Many felt isolated and alone, and were concerned about who would care for them when discharged. In some of the most extreme cases, participants felt so desperate that they wanted to stop their drugs to end their life:

“No one has come to pay me a hospital visit. They don’t care to know how my health is. I have also had challenges at home. When they leave and go to the lake [for fishing] no one remains at home. There is no one who can give you even water to drink when you are down.… I have a heavy heart… I have thought of committing suicide.”

Men’s social stress centred on their role as a husband, as defined by masculinity norms, including their inability to maintain sexual relations with their wives because of ill-health. Some women who disclosed their HIV status to their partners reported being unsupported, while most women in the Homa Bay site reported violence perpetrated by their partner, often including sexual violence. This further undermined their resilience to living with HIV, to self-care or to effectively seek help for their condition.

Treatment-taking and making sense of illness

Many participants faced challenges integrating pill-taking into their daily lives, including managing timing of doses which clashed with activities such as travel for work. Some described treatment fatigue or stopped taking pills during periods of good health, or questioned their original diagnosis:

“I got angry, and I told them I wouldn’t take my treatment anymore because I don’t think it’s right… how come I have AIDS and not my children?”

Overly strict treatment messages from providers were reported and discouraged some participants from adhering if they could not meet health workers’ expectations:

“We were told that we should not take ARVs after midday, that if you took them past that time then it will be of no effect.”

As a result, some participants skipped doses rather than taking their drugs later than the recommended time.

Similarly, condom use was emphasised by health workers as a primary way that participants could avoid treatment failure. This was a common explanation proposed by participants why their ART had “stopped working” or why their health had deteriorated.

“I think [I am sick] because of the regular sex we were having. Having sex daily multiplies the virus in you. I learned this when we went for counselling. That is where we were taught that if have HIV, we have to use a condom while having sex.”

Results from this study reveal that “patients who develop advanced HIV may be a sub-group of people living with HIV who have ‘slipped through the cracks’ of health and social support structures,” the authors say.

“Our findings challenge assumptions that advanced HIV is primarily an issue of patient dis-engagement or ‘late’ presentation to care, notions which cast patients as personally responsible for their ART adherence, without acknowledging the social constraints and circumstances that shape their engagement with care,” they add.

“Reducing the burden of advanced HIV will require strengthening decentralised health services to enable staff to identify the danger signs in patients at risk of advanced HIV, provide timely case management, ensure referral and provide post-discharge support to those with ongoing clinical needs.”

Burns R et al. Slipping through the cracks: a qualitative study to explore pathways of HIV care and treatment amongst hospitalised patients with advanced HIV in Kenya and the Democratic Republic of the Congo. AIDS Care, 26 Aug 2021.

The trial will evaluate whether the anti- cytomegalovirus (CMV) drug letermovir reduces inflammation when given to people who have well-controlled HIV and CMV without symptoms.
EurekAlert
25 Apr 22
Opportunistic infections

In-depth: Critical medicine priced out of reach for people with cryptococcal meningitis

Cryptococcal meningitis is the second top killer of people living with HIV in South Africa. In the second of a two-part series on access to treatment for the condition, Catherine Tomlinson puts the Spotlight on the drug liposomal amphotericin B (part one looked at flucytosine).
Spotlight
25 Apr 22
Opportunistic infections

New guidelines from WHO recommend a simpler, safer treatment for cryptococcal disease in people living with HIV

Aids deaths should be falling faster, but treatable fungal disease is keeping the numbers high.
The Conversation
10 Feb 22
Coronavirus