Treatment or watchful waiting for cervical abnormalities in women with HIV? 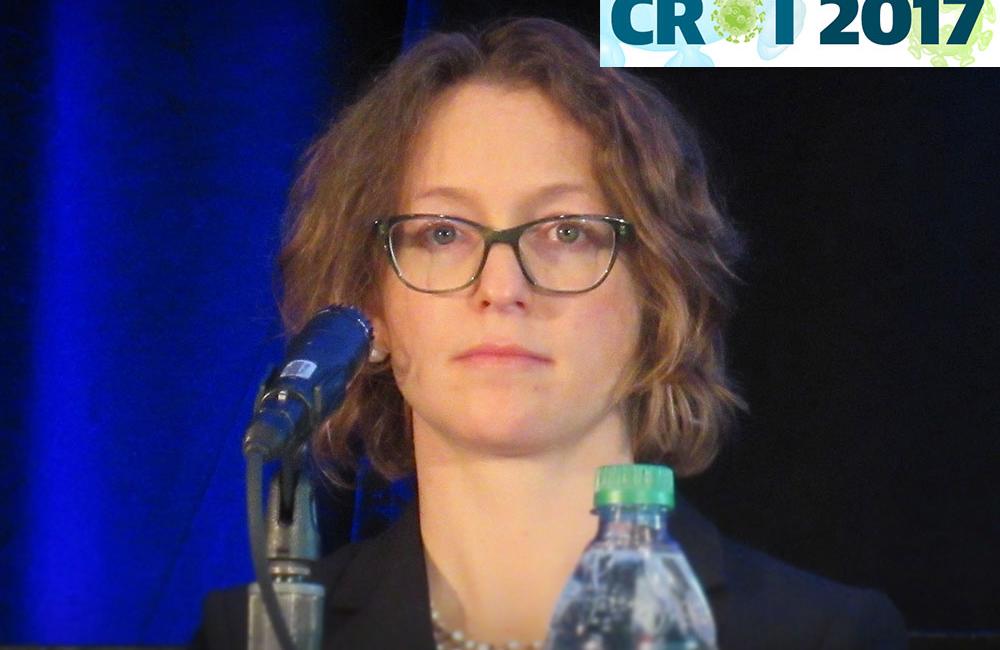 Close monitoring of earlier-stage cervical abnormalities (CIN-2) may be preferable to treatment for many women with HIV, a US study suggests. The findings, presented at the Conference on Retroviruses and Opportunistic Infections (CROI 2017) in Seattle on Tuesday, show that CIN-2 regressed in over three-quarters of women taking antiretroviral therapy (ART), without the need for treatment. A higher CD4 count was associated with a lower likelihood that the lesion would progress.

Cervical cancer is one of the most common causes of death and illness in women globally. Women with HIV, especially those with lower CD4 cell counts, are at increased risk of developing cervical intra-epithelial neoplasia or lesions (CIN) – changes in the cells of the cervix, sometimes referred to as 'pre-cancerous' cell changes. The risk of developing CIN is associated with infection with human papillomavirus (HPV), which is present in more than 60% of women with HIV.

Lesions are graded according to severity. Many cases of CIN-1 and some cases of CIN-2 will clear up without treatment, but the rate of regression or progression is unclear in women living with HIV. In the general population, CIN-2 is regressive in 30 to 40% of women, but women with HIV have had lower rates of regression in previous studies. Regardless of HIV status, women over the age of 25 are advised to have treatment for CIN-2.

Changes to cervical tissue which can be seen on visual examination through a colposcope. These are graded CIN1 to 3 according to severity. CIN1 is often left untreated; higher-grade lesions will probably need removing.

Treatment can include surgically removing affected tissue. While this prevents progression to cervical cancer, recent research has suggested such treatment can affect reproductive health, potentially leading to premature birth and complications during pregnancy.

Around 8500 women with HIV give birth annually in the United States. Dr Kate Michel, presenting, noted that it is important to provide guidance for those women with HIV who may delay CIN-2 treatment to improve pregnancy outcomes.

Dr Michel and colleagues wanted to ascertain the risk of CIN-2 progression in women of reproductive age, including time to progression and factors associated with progression, with CD4 cell count and HIV viral load analysed as time-dependent covariates. The study included both women who had previously been treated for CIN-2 and those who had not.

Women under the age of 46 were included from the observational Women’s Interagency HIV Study (WIHS). The study, begun in 1993, looks at the impact and progression of HIV in women in clinical sites in and around ten cities in the United States. It includes women living with HIV and women identified as being at high risk of HIV. A total of 116 women with biopsy-confirmed CIN-2 were included in the study. Of these, 102 were HIV positive (41 had previously had CIN-2 treatment) and 14 were HIV negative (8 had previously been treated).

With a mean age of 32 years, the majority of women were black or Hispanic, just over half were smokers and 72% had one male partner. Women with HIV were on average five years older than HIV-negative women.

CIN-2 regression, defined as biopsy-confirmed CIN-1 or no abnormalities detected by biopsy or normal Pap (cervical screening) tests across all follow-up visits, was overall (63%) the most common prognosis, independent of treatment, occurring in 62% and 71% of HIV-positive and HIV-negative women respectively.

Seventeen per cent more HIV-negative women had treatment for CIN-2 than HIV-positive women. Dr Michel noted that this gap, while not statistically significant, warrants further examination of reproductive health access for women with HIV.

Dr Michel concluded that for women with HIV considering pregnancy and with well-controlled viral load on ART, a short-term conservative management of CIN-2 with close monitoring provides an alternative to immediate surgery.

Treatment for CIN-2/3 in lower-income settings

In resource-limited settings where HIV is endemic, treatment for abnormal cervical cells (CIN-2/3) usually takes the form of cryotherapy (freezing cells with a chemical); this technique is cost-effective and feasible as it can be performed by nurses.

Findings from observational studies of women with HIV suggest treating abnormal cervical cells with cryotherapy may be less effective than treatment with LEEP (loop electrosurgical excision procedure), which removes abnormal cells by cutting them away with a thin wire loop, heated with an electrical current.

A randomised controlled trial conducted in Kenya found that HIV-positive women with cervical lesions (CIN-2/3) treated with cryotherapy had a 64% higher risk of recurrent lesions compared to those treated with LEEP at 24 months follow-up, Sharon Greene of the University of Washington, Seattle, told the conference.

Women with HIV underwent cervical screening with Pap test and confirmatory biopsy. Four hundred women with CIN-2/3 or carcinoma in situ (CIS) were randomised to receive cryotherapy or LEEP and were followed up every six months with a Pap test for two years (and biopsy if indicated).

Age, education and employment status were balanced between the study arms. Approximately eighty per cent of women in both study arms were exposed to ART for longer than six months. Median CD4 cell counts were similar in both arms, 404 cells/mm3 (IQR: 211-532) and 407 cells/mm3 (IQR:221-522), in the cryotherapy and LEEP arms, respectively. Fifty-nine per cent and 63% had CIN-3 in the cryotherapy and LEEP arms, respectively.

Overall the rate of recurrence of high-grade squamous intraepithelial lesions (HSIL) was 21.1 per 100 woman-years after cryotherapy and 14.0 per 100 women-years after LEEP.

At 24 months, while HSIL recurred in both arms, recurrence was significantly more frequent in the cryotherapy arm, 37% vs 26%, p = 0.018. After adjusting for baseline viral load, CD4 cell count and antiretroviral treatment, women treated with cryotherapy had a 64% greater risk of recurrence.

HIV-positive women are disproportionately affected by cervical cancer and once cervical cancer is invasive, mortality in women with HIV is almost twice as high as that in HIV-negative women.

The World Health Organization (WHO) guidelines recommend cryotherapy regardless of HIV status, with LEEP as an alternative for women who are not eligible for cryotherapy. Findings from this study, Greene said, provide compelling evidence for WHO and national ministries of health to develop a screening and treatment algorithm based on HIV status. In particular, women with HIV may need to be followed up at 6 months rather than 12 months, especially if they receive cryotherapy.