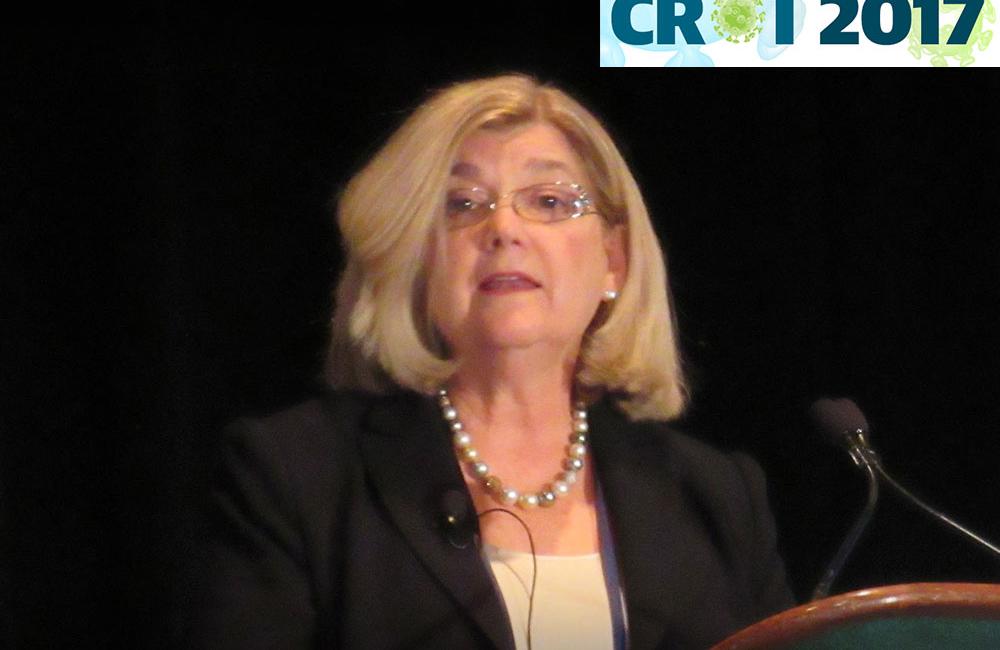 Doravirine, an investigational next-generation non-nucleoside reverse transcriptase inhibitor (NNRTI) from Merck, reduced HIV viral load as well as boosted darunavir in a phase 3 clinical trial of people starting antiretroviral therapy (ART) for the first time, but it had a better lipid profile, according to a late-breaking presentation at the Conference on Retroviruses and Opportunistic Infections (CROI 2017) this week in Seattle.

Doravirine (formerly MK-1439) is active against HIV with common NNRTI-resistance mutations including K103N. It can be taken once daily with or without food and has low potential for drug-drug interactions. As previously reported, a phase 2 trial showed that doravirine suppressed viral load as well as efavirenz (Sustiva or Stocrin), but with fewer neuropsychiatric side-effects.

The study analysis included 769 previously untreated adults with HIV. Most (84%) were men, nearly 80% were white and the average age was 35 years. At baseline the mean CD4 T-cell count was approximately 420 cells/mm3 and the mean viral load was 4.4 log10 copies/mL; 20% had high viral load above 100,000 copies/ml. At baseline they had no genotypic resistance to any study drugs.

Participants in this double-blind study were randomly assigned (1:1) to take either 100mg doravirine or 800mg darunavir (Prezista) plus 100mg ritonavir. In addition they received two nucleoside/nucleotide reverse transcriptase inhibitors (NRTIs), either tenofovir DF/emtricitabine (Truvada; 87%) or abacavir/lamivudine (Kivexa or Epzicom; 13%). In each arm participants received matching placebos for the drug not assigned, so they all took four pills a day.

Treatment continued for 96 weeks. The primary endpoint was the proportion of people with HIV RNA below 50 copies/ml at week 48.

At 48 weeks, 84% of participants in the doravirine arm and 80% of those assigned to boosted darunavir had undetectable HIV RNA below 50 copies/ml. The difference was not significant and doravirine was shown to be non-inferior to darunavir/ritonavir.

Virological non-response rates were similar in the doravirine and darunavir/ritonavir arms (11% vs 13%, respectively). Among the 15 non-responders who underwent resistance testing, there were no genotypic or phenotypic NNRTI, NRTI or protease inhibitor resistance mutations. Among 40 people who discontinued treatment early with detectable virus, one non-adherent participant developed doravirine resistance.

Both regimens were generally safe and well tolerated. The most common adverse events were diarrhoea, nausea, nasopharyngitis (nose and throat inflammation) and headache. Rates of serious adverse events were similar in the doravirine and darunavir/ritonavir arms (5% vs 6%, respectively), as were events leading to treatment discontinuation (2% vs 3%). Side-effects associated with other NNRTIs, such as rash and neuropsychiatric symptoms, were similar in both arms. Diarrhoea was the only side-effect with a notable difference, being more common in the darunavir/ritonavir arm.

In addition to the participants who discontinued treatment due to adverse events, 3% in the doravirine arm and 4% in the darunavir/ritonavir arm withdrew consent, and 4% and 5%, respectively, were lost to follow-up. Squires said that the large number of pills was commonly mentioned as a reason for quitting early.

"Doravirine is a novel once-daily NNRTI for first-line treatment with consistent efficacy regardless of baseline viral load and very good tolerability," the researchers concluded.

In order to be competitive in today's market, antiretrovirals must be easy to take as well as safe and effective, as a majority of people starting first-line treatment can now take one pill once a day.

Merck has developed a fixed-dose co-formulation of doravirine, tenofovir disoproxil fumarate (DF) and lamivudine, which is being evaluated in ongoing studies. The phase 3 DRIVE-AHEAD trial is comparing doravirine/tenofovir DF/lamivudine to efavirenz/tenofovir DF/emtricitabine (Atripla) for initial treatment, while DRIVE-SHIFT is evaluating a switch from another suppressive regimen to the doravirine co-formulation, according to a Merck press release.