New HIV infections fall in the US, but demographic and geographic disparities persist 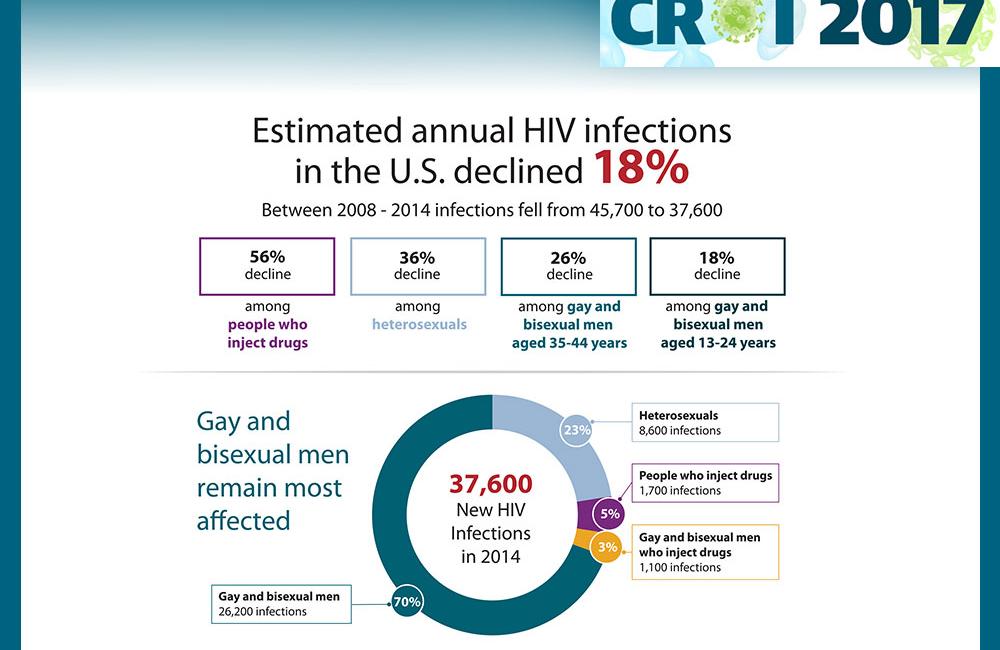 The number of annual new HIV infections in the US fell by 18% overall since 2008, offering evidence that prevention and treatment efforts are having an impact, according to data from the US Centers for Disease Control and Prevention (CDC) released on Tuesday to coincide with presentations at the 2017 Conference on Retroviruses and Opportunistic Infections (CROI) in Seattle. A closer look at the data, however, shows some notable differences across demographic groups and geographic regions.

"The nation’s new high-impact approach to HIV prevention is working," Jonathan Mermin, director of CDC’s National Center for HIV/AIDS, Viral Hepatitis, STD, and TB Prevention, stated in a CDC press release. "These data reflect the success of collective prevention and treatment efforts at national, state, and local levels. We must ensure the interventions that work reach those who need them most."

HIV incidence hit a peak in US in the mid-1980s, dropped dramatically as more people became aware of the epidemic and acted to prevent transmission, and plateaued at around 50,000 new infections per year since the mid-1990s. However, in recent years the CDC has begun to report declines in reported new diagnosed HIV cases and estimates of total new infections.

But annual new infections remained stable among gay and bisexual men – at about 26,000 per year – as increases and decreases in different subgroups offset each other. Men who have sex with men were the only group that did not see an overall decline in yearly HIV incidence from 2008 to 2014.

At CROI Sonia Singh of the CDC presented a detailed breakdown of the data for gay, bisexual, and other men who have sex with men (MSM). While this group represents approximately 2% of the US population, they accounted for two-thirds of people diagnosed with HIV in 2015.

Singh's team looked at reported HIV diagnoses among MSM and the first CD4 test result after diagnosis, as reported to the CDC's National HIV Surveillance System. These data were used to estimate HIV incidence (new infections), prevalence (all people living with HIV), and the percentage of undiagnosed infections, based on a model of how rapidly CD4 cell counts decrease following infection.

HIV prevalence increased over time for MSM in most racial/ethnic and age groups. But increasing prevalence is not necessarily a bad thing, as it reflects the fact that more people with HIV are living longer.

Turning to changes in HIV incidence among gay and bi men, some groups saw an increase, others saw a decrease and some stayed about the same. These balanced out to yield overall stable incidence for MSM as a whole.

Finally, regarding undiagnosed HIV, the researchers estimated that 15% of all people living with HIV, 17% of gay and bi men, 16% of heterosexuals and 6% of people who inject drugs had undiagnosed infection.

The researchers reported that among MSM about 20% of black people, 21% of Latinos and 13% of white people were undiagnosed. Younger gay men were most likely to be undiagnosed, reaching about half in the 13-24 age group. But the proportion who were undiagnosed fell over time in most subgroups.

These declines "are a promising sign that HIV prevention efforts are paying off," Singh said at a CROI press conference.

Anna Johnson and colleagues from the CDC estimated HIV incidence, prevalence and undiagnosed infections among adults in all 50 states and Washington, DC. They too used data on reported HIV diagnoses and first CD4 test results from the National HIV Surveillance System.

Between 2008 and 2014 new infections decreased substantially in several states and in Washington, DC. In fact, the researchers did not see increases in any of the 36 jurisdictions where annual HIV incidence could be estimated.

States in the Southeast US continued to bear a disproportionate burden of HIV. While Southern states include 37% of the US population, they accounted for half of estimated infections in 2014.

"These data reflect the success of collective prevention and treatment efforts at national, state, and local levels. We must ensure the interventions that work reach those who need them most." Jonathan Mermin, CDC

CDC researchers suggested that the declines in new HIV infections, where they occurred, were largely due to efforts to increase the number of HIV-positive people who have been tested, are taking effective antiretroviral treatment, and have suppressed viral load, as undetectable virus is essentially untransmittable.

Increased use of pre-exposure prophylaxis (PrEP) may also have played a role in recent years – especially in some groups of gay men. However, Truvada (tenofovir/emtricitabine) was only approved for PrEP in 2012 and not widely used for this purpose until the second half of 2013, and so would not have played a role for most of the study period.

Expansion of syringe services and other harm reduction efforts likely helped reduce the number of new infections among people who inject drugs by more than half. But the new figures do not reflect localised HIV outbreaks among drug injectors like the one that occurred in rural Indiana in early 2015.

"The opioid epidemic in our country is jeopardizing the dramatic progress we’ve made in reducing HIV among people who inject drugs," Mermin cautioned. "We need to expand the reach of comprehensive syringe services programs, which reduce the risk of HIV infection without increasing drug use, and can link people to vital services to help them stop using drugs."

In Africa, there are over 500 scientists working in 30 countries involved in sequencing, according to the South Africa-based Human Heredity and Health in Africa (H3Africa) initiative, which aims to create and support a pan-continental network of laboratories conducting research in genomic sciences. But the continent lags far behind the rest of the world when it comes to sequencing, said Dr Matshidiso Moeti, WHO Regional Director for Africa. “Only 1 per cent of over 3 million Covid-19 sequences conducted worldwide occur in Africa,” she said in September.
Evening Standard
2 Dec 21
Ethnic & cultural minorities

US: Rates of HIV infection among Black, Hispanic men unchanged in 10 years

Matthew Hodson, Executive Director of NAM aidsmap, shares insights into how the United Kingdom has managed to meet and surpass the 90–90–90 targets to address the AIDS epidemic, initially set by the Joint United Nations Programme on HIV/AIDS (UNAIDS) for 2020.
WHO Europe
1 Dec 21
Epidemiology

A new report marking World AIDS Day, jointly published by the WHO Regional Office for Europe and the European Centre for Disease Prevention and Control (ECDC) shows a 24% drop in the rate of newly diagnosed HIV cases between 2019 and 2020. But this drop is largely due to reduced HIV testing during 2020 caused by COVID-19 restrictions and disruptions in service.
World Health Organization
1 Dec 21
Epidemiology

The number of people with HIV using antiretroviral therapy (ART) to suppress the virus could increase as much as 36 percent by the end of the decade and includes more older people, representing a continued public health burden, according to new projections led by researchers at the Johns Hopkins Bloomberg School of Public Health.
EurekAlert
1 Dec 21
More editors' picks