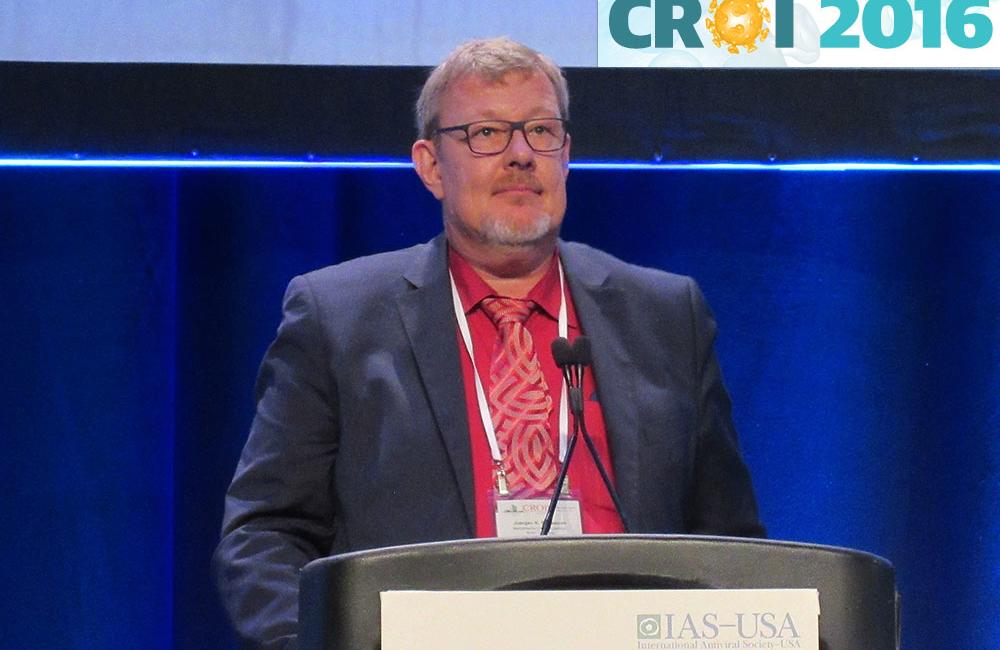 An interferon- and ribavirin-free regimen of sofosbuvir/ledipasvir (Harvoni) taken for just 6 weeks was enough to cure hepatitis C in HIV-positive people with recent hepatitis C virus (HCV) infection if their HCV viral load was low, but those with high HCV levels may need longer treatment, according to study findings presented at the Conference on Retroviruses and Opportunistic Infections (CROI 2016) this week in Boston. Presenter Jürgen Rockstroh of the University of Bonn predicted that HCV viral load will become a key factor when making decisions about treating acute hepatitis C.

Studies done in the interferon era showed that treating people during the acute stage of HCV infection led to much higher response rates and required a shorter duration than interferon-based therapy started during chronic infection.

The advent of direct-acting antivirals (DAAs) in interferon-free regimens has made chronic hepatitis C treatment shorter, better tolerated and more effective, and many experts expected the same would be true for acute HCV infection. But a combination of sofosbuvir plus ribavirin taken for 12 weeks produced a sustained response rate of only 59% in a small study of HIV-positive men with acute hepatitis C presented at the recent 2015 AASLD Liver Meeting.

There are currently no specific direct-acting antiviral regimens approved for the treatment of acute HCV infection. Current guidelines recommend using the same DAA options as for chronic infection, or even continuing to use interferon and ribavirin.

Prof. Rockstroh and colleagues conducted a study to evaluate the safety and efficacy of short-duration treatment using the HCV NS5B polymerase inhibitor sofosbuvir and the NS5A inhibitor ledipasvir for HIV-positive people with genotype 1 or 4 acute hepatitis C.

The analysis included 26 participants with HIV at five sites in Germany and the UK. All were men, most were white and the mean age was 41 years. They had acute HCV infection, defined as a positive HCV RNA test following a negative HCV antibody or RNA test within the past 6 months, or elevated ALT/AST during the past 6 months with no other known cause. About two-thirds had HCV genotype 1a and the rest genotype 4; the mean HCV viral load at baseline was 5.4 log10 IU/ml.

Participants could either be on antiretroviral therapy (ART) with suppressed HIV viral load or not on ART with no plans to start. People on ART were using a variety of antiretrovirals that can be co-administered with sofosbuvir/ledipasvir. The most common regimens were efavirenz (Sustiva), raltegravir (Isentress), dolutegravir (Tivicay) or boosted atazanavir (Reyataz) plus tenofovir/emtricitabine (the drugs in Truvada).

All participants in this open-label study received sofosbuvir/ledipasvir in a fixed-dose coformulation (900/400mg) for 6 weeks.

The usual recommended duration of sofosbuvir/ledipasvir for chronic hepatitis C treatment is 12 weeks, though easier-to-treat patients with no prior treatment experience, no cirrhosis and low viral load can be treated for 8 weeks.

After 6 weeks of therapy and 12 weeks of post-treatment follow-up, 20 of 26 participants (77%) achieved sustained virological response (SVR12), or continued undetectable HCV RNA. Four people experienced virological failure – three relapses and one reinfection with a different HCV genotype – and two were lost to follow-up.

All three relapsers had high baseline HCV viral load above 7.0 log10 IU/ml; two had genotype 1a and one had genotype 4. No new NS5A or NS5B resistance-associated viral variants were detected at the time of relapse.

Treatment was generally safe and well-tolerated with one unrelated serious adverse event and no treatment discontinuations for this reason. The most common adverse events were fatigue (7%), nasopharyngitis (7%) and headache (6%), mostly mild or moderate. Safety profiles were similar for people receiving boosted or unboosted tenofovir-based ART regimens.

Given that there were no relapses among participants with baseline HCV RNA <6.9 log10 IU/ml, the researchers concluded, “acutely HCV-infected patients with a higher viral load should be considered for longer duration of therapy.”

He acknowledged that it is still not clear when is the best time to treat people with acute HCV infection. About 25% of all people and 15% of people with HIV and HCV co-infection with acute HCV infection will spontaneously clear the virus. Many experts recommend waiting to see if treatment is really needed, but the likelihood of transmitting HCV during this early period can be high.

When considering guidelines for acute hepatitis C treatment, “everything is going to be driven by viral load,” Prof. Rockstroh predicted.