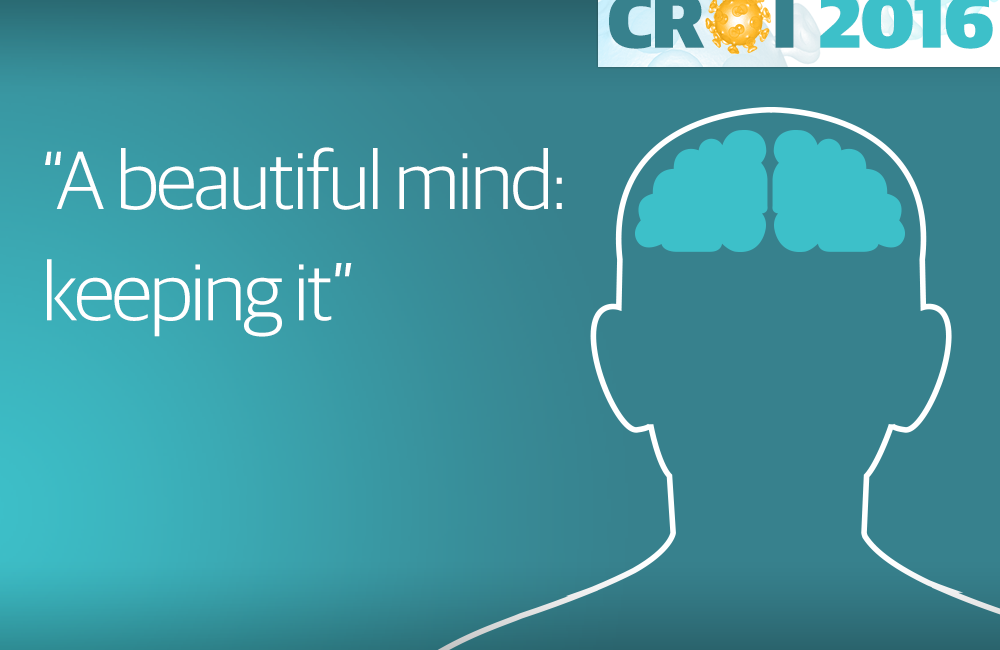 In the future, HIV-associated neurocognitive disorder (HAND) may become less common because of the earlier use of antiretroviral therapy (ART), but neurological disease – caused by a number of different factors – will remain an important issue as people with HIV live longer, according to several presentations in a symposium called “A Beautiful Mind: Keeping It”, held at the annual Conference on Retroviruses and Opportunistic Infections (CROI 2016) in Boston.

In the emerging scenario, management of neurological complications in people living with HIV will increasingly be guided by the use of biomarkers, including measures of HIV and inflammation in the cerebrospinal fluid (CSF), new biomarkers of neurological damage that can be measured in the blood instead of CSF and a number of different brain imaging technologies. Together, these biomarkers could help clinicians differentiate between the various causes of neurocognitive impairment and help them tailor treatments that will work better for specific individuals.

Some therapeutic choices should be the same for all people with HIV, according to Andrea Calcagno from the University of Torino in Italy.

“I think we should try to reduce cardiovascular risk [which is independently associated with neurocognitive impairment] in all our patients; and we must control plasma and CSF HIV RNA by using genetic resistance testing based-ART, but we might combine the biomarkers we have to select patients for different interventions,” he said, such as intensified ART regimens or anti-inflammatory agents to reduce chronic inflammation, or neuro- or CNS-targeted ART to address HIV replication in what appears to be a distinct reservoir of virus evolving within the brain tissue of some individuals.

Neurological complications are common in people living with HIV, but the pattern seen has changed over the years – particularly since the development of suppressive ART. In the past, a severe form of neurocognitive impairment, known as AIDS dementia complex (ADC), characterised by HIV encephalitis and very high viral loads and immune activation in the CSF, developed in 20 to 30% of people with HIV not taking treatment. Now known as HIV-associated dementia, it is only seen in people who present very late for treatment – and it is extremely rare in anyone on stable therapy.

However, milder HIV-related neurocognitive impairment, or HAND, is common even among people on ART, with a prevalence of 15 to 50% in some studies. Some of the impairment may be due to central nervous system (CNS) injury that occurred before treatment initiation (called a ‘legacy effect’ or inactive disease) – especially in people with a low CD4 cell nadir (lowest ever CD4 count) – while the remainder appears to be due to active disease with ongoing neuronal injury and chronic immune activation in the CSF.

In some cases, active disease may be due to symptomatic HIV replication in the brain, where the viral load is persistently elevated in the CSF even though it is suppressed in the blood. More often, however, elevated viral load in the CSF is simply a transient ‘blip’ that isn’t associated with disease progression or major symptoms. However, these blips do appear to lead to significant immune activation in the CSF that could damage neurons. There may also be other reasons for persistent immune and glial cell activation in the brain, such as elevated cytokines or production of viral proteins that can cause CNS inflammation.

It is also important to note that other co-morbidities and confounders may account for some neurological complications in people with HIV as well, including:

This can make neurological assessment rather complicated in people with HIV.

“The current criteria for diagnosis of HAND are based primarily on neurocognitive testing and assessment of the activities of daily living (ADL) [which can be difficult to perform in an outpatient setting] and not on objective measures such as neuroimaging or CSF and blood biomarkers,” said Magnus Gisslén of the University of Gothenburg in Sweden.

Gisslén and another speaker, Beau Ances of Washington University in St Louis, reviewed how biomarkers could be used to better distinguish between the different causes of neurocognitive impairment.

Measurement of biomarkers in the CSF is one of the clearest ways to determine what is going on in the brain, although given that lumbar punctures (spinal taps) are needed to take specimens, their routine clinical use must be limited. These include:

Gisslén singled out NFL as being particularly useful in assessing HIV- and age-related neural damage. Furthermore, since the development of a new ultra-sensitive test, NFL can now be measured in the blood. Gisslén said that NFL levels may be 50 to 100 times lower in plasma than in CSF, but the values have a close correlation with CSF values and, in studies so far, appear to be highly sensitive for HIV-related neuronal injury. Work is ongoing to establish normative values across labs.

Meanwhile, neuro-imaging techniques are also non-invasive and more patient-friendly. According to Ances, a range of new techniques have recently been developed that could provide a way of showing what HIV is doing in the brain. These include volumetric and functional magnetic resonance imaging (MRI), diffusion tensor imaging (DTI), and arterial spin labelling (ASL), among others.

Each neuro-imaging method shows somewhat different things about the CNS, and their use may offer unique insight into mechanisms underlying neurocognitive damage in each person with HIV. In addition, they could be used to monitor disease progression or to evaluate the efficacy of neuro-targeted ART regimens and other therapies in the CNS.

CNS as an HIV reservoir

Ronald Swanstrom of the University of North Carolina at Chapel Hill described his research into the sources of virus in the CSF, which led him to conclude that virus can be found in the CSF as the result of three distinct mechanisms:

“The unique genetic lineage of virus replicating independently in the CNS and the phenotypic adaptation to this CD4 low environment provide clear evidence of a distinct viral population and site of ongoing viral replication,” Swanstrom said.

Compartmentalisation of viral production in the brain could have serious consequences. Swanstrom’s primary concern is that “the current favourite [ART] regimens are at much reduced levels that would be catastrophic if it were in the blood. Given poor drug penetrance, is there a smoldering active reservoir of virus in the CNS?”

Calcagno believes that there are some limitations to the current CPE scoring system, including the fact that the scores are based upon limited pharmacodynamic data, the CPE system doesn’t take into account resistance mutations in the virus, and the complexity of the system is too great – there are so many clinically relevant variables (age, CD4 nadir, co-morbidities) to take into account when looking at neurocognitive function.

In addition, he pointed out that there are now data on single and dual therapy regimens that do not show any loss of effect on virus in the CSF – symptomatic CSF virus compartmentalised in the brain that seems to be stable at around 10% on PI monotherapy. Meanwhile, clinical trial data on intensified viral regimens have been disappointing. There is also significant variability between patients in drug levels in the CSF.

Finally, the efficacy of antiretrovirals in monocytes, macrophages, and astrocytes – the most critical cells HIV can infect in the CNS – is completely different to that in CD4 cells. In fact, a study using a monocyte efficacy (ME) score found that a higher ME score was associated with better neurocognitive functioning.

Calcagno concluded by describing how he thinks currently available biomarkers can already be used to guide treatment. For instance, if neurocognitive impairment is observed in a person with low CSF viral load, a high CD4 nadir, and low CSF neopterin, neurotoxicity from antiretrovirals such as efavirenz might be to blame, and the treatment regimen should be de-intensified or changed. However, if impairment is seen in patients with a low CSF viral load, a high CD4 nadir, but high neopterin, clinicians might try strategies to decrease immune activation, perhaps by using maraviroc or low dose aspirin. Finally, if a person with impairment has a high CSF viral load and a low CD4 cell nadir and high neopterin levels, CNS-targeted ART may be called for.

New research in Zambia finds that children infected with HIV are significantly more likely to do worse in neurological assessments despite having well-controlled HIV disease, suggesting that they may struggle with cognitive and mental health issues.
EurekAlert
13 Oct 22
More editors' picks