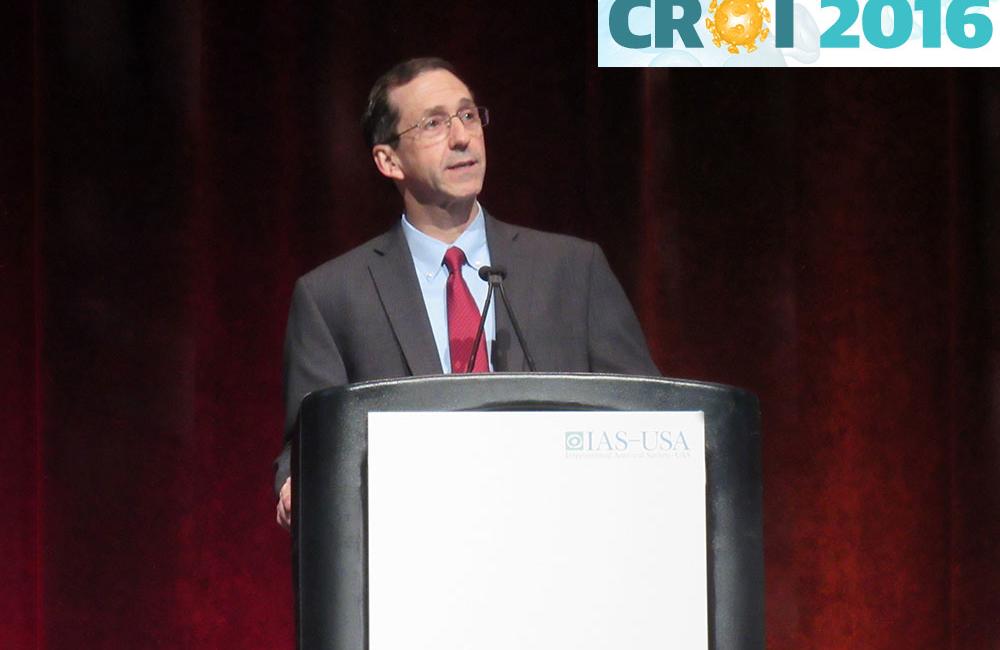 The next generation of pre-exposure prophylaxis (PrEP), and even HIV treatment, may consist of antibodies that could be given as an intravenous infusion or an injection into muscle, two presenters at the Conference on Retroviruses and Opportunistic Infections (CROI 2016) in Boston have said.

John Mascola of the US national Vaccine Research Center was presenting at the main conference this morning and Kathryn Stephenson of Harvard Medical School spoke to the Community Cure Research Symposium that was held before the main conference on Sunday. Mascola looked mainly at the potential for antibodies to act as the next generation of PrEP, with a nod to treatment, while Stephenson looked at their potential for forming part of a cure for HIV.

Antibodies are large protein molecules that are generated by the immune system in response to a wide variety of foreign substances ranging from parasitic worms to single molecules. Antibodies either directly cripple (‘neutralise’) the foreign invader or alert other branches of the immune system to come and neutralise it, in a process called antibody-dependent cellular cytotoxicity or ADCC.

Antibodies can be induced by inoculating people with a vaccine that ‘looks like’ a real pathogen to the immune system. But they can also be used as so-called ‘passive’ antibody inoculations, whereby antibodies already generated in response to an infection, or artificially, are used as a medicine.

John Mascola said that giving antibodies against a bacteria or virus as a treatment for that infection predated antibiotics, with the use of serum from other sufferers to fight infections. Today we use antibodies to fight diseases like chronic hepatitis B, rabies and respiratory syncytial virus. In 1990 a mix of antibodies of the type called immunoglobulin G protected chimps from HIV infection.

One problem with antibodies, especially with such a variable virus as HIV, is that they are usually very specific and only protect people against one strain of the virus. This can be solved in two ways: firstly, there exist rare ‘broadly neutralising’ antibodies (bNAbs) that are active against a much broader number of HIV strains, especially if used in combination. Secondly, the generation, by a vaccine, of a wide range of non-bNAbs can, via ADCC, prime another part of the immune system, the so-called innate immune system, into mounting a much more sensitive and powerful response to HIV and HIV-infected cells.

Both strategies have been tried in prevention but these presenters only looked at trials of bNAbs.

The first anti-HIV bNAb was discovered in 2000 but since 2009 there has been a big increase in the discovery of more powerful and broader-spectrum antibodies, and some of these are ready to go into human trials. The one furthest ahead is an antibody called VRC01.There have been a number of animal trials but only now is a human trial to find an effective protective dose starting. The reason for the delay is that VRC01 needed to be tested against a wide variety of different viruses to establish a likely effective dose. Animal studies found, firstly, that 13% of viral strains had innate resistance to VCR01 – not unexpected, since no bNAb neutralises all viruses. A level of about 20 micrograms per millilitre in the blood was sufficient to neutralise the vast majority of other viruses.

The first human phase 1 (drug-level) trial found that a single dose of VRC01 took three weeks to fall to a level of below 50 mcg/ml and about seven weeks to fall below 20mcg/ml. This means that with repeat dosing, one dose every two months should be sufficient for protection against non-resistant viruses.

This laid the way open for the first bNAb-PrEP trial in humans, the AMP (Antibody Mediated Prevention) trial, which will start in the US this spring.

In this trial, 2400 HIV-negative gay men and trans women in North and South America and 1500 women in sub-Saharan Africa at high risk of HIV will receive a dose of VRC01 or a placebo every two months. The hope is that not only will VRC01 be effective but that the effective dose will be low enough for it to be given as a subcutaneous injection instead of an intravenous drip as now.

VCR01 would probably not be good enough for PrEP (though the researchers hope it will be at least 60% efficacious) because of pre-existing resistance: a viable bNAb PrEP regimen would have to be ten times more potent both in terms of dose and breadth of activity. But a combination of two bNAbs – and we already have 20 or so others that are either more potent than VCR01, broader-spectrum, or both – could offer 98 to 99% efficacy against HIV. One other potential problem is cost; antibodies are pricey and one intended for long-term regular use would have to be manufacturable in bulk and efficacious with a small dose. One study last year found one combination of two antibodies that could neutralise all HIV viruses thrown at it at a blood level of 2mcg/ml, and a combination of four bNAbs 100% potent at 0.2mcg/ml.

It may be possible for one bNAb shot to last for a lot longer in future. The half-life of antibodies can be extended by making them more sensitive to cellular receptors, and in one experiment, modifying the existing antibody drug motavizumab, which is used against respiratory syncytial virus, to be more sensitive to a cellular receptor called FcRn sustained it at therapeutic levels for about six months. A phase I study of VCR01 similarly modified is underway.

John Mascola also talked briefly about the use of passive immunisation of antibodies as a treatment. In treatment, because there is natural pre-existing resistance, antibodies would have to be used as adjuncts to conventional ARV treatment. Their biggest potential lies in their ability, through ADCC mechanisms, to expose and target quiescently HIV-infected cells in the ‘reservoir’ of HIV that is untouched by conventional antiretroviral therapy.

So far single-dose studies in humans of VCR01 and another bNAb called 3BNC117 have produced drops in viral load in people susceptible to the antibodies and prolonged drops of over a month below detectability in the people that started with the lowest viral loads. Meanwhile, a monkey study using a combination of two or three bNAbs produced viral undetectability for over a month in eight out of ten monkeys from a single dose.

A more exciting approach is to use so-called bi-functional antibodies. These attach both to HIV-infected cells and to the cellular receptors on immune cells – either natural killer cells or T-cells – and therefore literally bringing HIV-infected cells into proximity with their killers. This approach, already used in cancer, has been successfully tried in test-tube studies with HIV but awaits animal and human studies.

At the cure symposium, Kathryn Stephenson said that 3BNC117 was also being taken forward into two trials, one in people with HIV who were undergoing a treatment interruption and one in people on ART.

Both VCR01 and 3BNC117 attach to the part of the gp120 protein on the surface of HIV that binds to the CD4 receptor on immune cells. Antibodies that bind to other sites are behind them in the research pipeline. Some bind to the V3 loop, a part of the HIV gp120 protein that assists with attachment to CD4 cells. Furthest along is a bNAb called PGT121. This, found in an African patient in 2011, is both broad-spectrum and extremely potent, neutralising half of the strains of HIV it has been tested against at a blood level of only 0.3mcg/ml (though over 10% still remain resistant to it).

In monkey studies, an infusion of PGT121 produced an undetectable viral load in 16 out of 18 macaques given it (and a viral load decline in all 18). The period of undetectability from one infusion was three weeks in the 16, the average was seven weeks, and the three monkeys with the lowest baseline viral loads were still undetectable four months later – from one dose. Excitingly, reductions of over 50% of the HIV DNA contained within reservoir cells were also seen in cells in the lymph nodes and intestines.

Even further away are antibodies that bind to the V2 loop of the gp120 molecule. These are interesting because their mechanism of action is to stop HIV infection via direct cell-to-cell transfer rather than viral particles – a route of transmission that may be the explanation for long-term, low-level continued HIV replication even in people on ART.

The two leading contenders for V2 loop bNAbs are called CAP256 and PGDM1400. The former, found in a South African patient, is particularly active against HIV subtypes A and C, the most common types found in Africa. PGDM1400 is one of the broadest-spectrum bNAb yet found. A combination of the two bNAbs had activity against 98% of a panel of viruses.

A number of the bNAbs we mention here could not just treat HIV – but help to cure it. VRC01 and PGT121 are able to inhibit viral replication in reactivated reservoir cells, and 3BNC117 has been shown to have potential to kill these infected cells in mice. This leads to the possibility of a ‘triple whammy’ ‘kick-and kill’ HIV cure regimen.

First, latency reversing agents (LRAs) like the drugs vorinostat or romidepsin, already in human trials, would induce the normally quiescent HIV reservoir cells to come out and ‘show’ themselves: VRC01 or PGT121 could be used to guard against the possibility that the reawakened reservoir cells might produce dangerous amounts of new HIV and ‘seed’ the reservoir again; and 3BNC117, or bi-functional antibodies, could be used to kill these cells. Such a cocktail of bNAbs plus LRAs has already led to undetectable cell-associated viral RNA in a proportion of mice in one study. Trials in humans are several years away, though.

Mascola JR. Harnessing antibodies for HIV-1 prevention and treatment. Conference on Retroviruses and Opportunistic Infections, Boston. Plenary presentation #15, 2016. View a webcast of this session on the conference website.