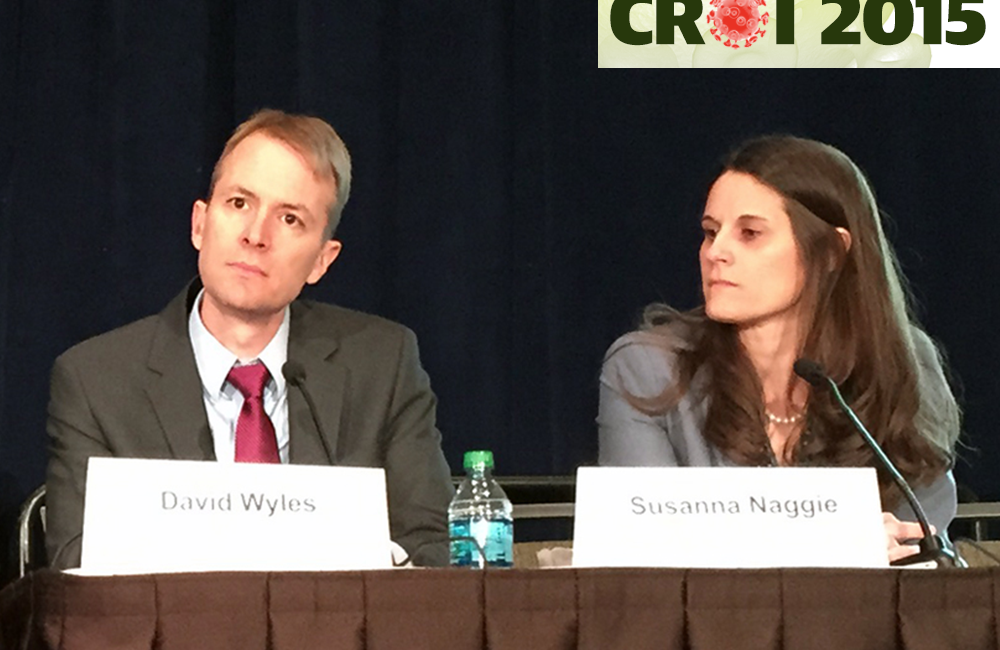 David Wyles and Susanna Naggie presenting at CROI 2015. Photo by Liz Highleyman, hivandhepatitis.com
This article is more than 8 years old. Click here for more recent articles on this topic

A pair of two-drug, 12-week regimens containing neither interferon nor ribavirin – sofosbuvir (Sovaldi) plus either ledipasvir (the Harvoni coformulation) or daclatasvir (Daklinza) – cured hepatitis C for more than 95% of people with HIV and hepatitis C co-infection, according to two presentations at the 2015 Conference on Retroviruses and Opportunistic Infections (CROI) this week in Seattle, USA. These findings confirm that people living with HIV who have hepatitis C can be treated the same as those with hepatitis C alone.

The advent of oral direct-acting antiviral agents (DAAs) that target different steps of the hepatitis C virus (HCV) lifecycle have revolutionised treatment, offering therapy that is shorter, better tolerated, and more effective than interferon-based therapy. This is particularly beneficial for people with HIV and HCV co-infection who tend to have more rapid liver disease progression and do not respond as well to interferon.

This study enrolled 335 participants with HIV and HCV co-infection in the USA, Canada and New Zealand. The trial had broad inclusion criteria and included more difficult-to-treat groups such as prior non-responders and people with liver cirrhosis.

Most participants (82%) were men, 34% were black – far more than in most DAA trials to date – and the mean age was 52 years. Almost all (98%) had HCV genotype 1, with a small number of genotype 4s. More than half (55%) were treatment-experienced, three-quarters had unfavourable IL28B gene variants and 20% had compensated cirrhosis.

With regard to HIV, the patients were on antiretroviral therapy (ART) and most had undetectable HIV viral load. They could be taking either efavirenz (Sustiva, 48%), raltegravir (Isentress, 44%) or rilpivirine (Edurant, 9%), all with tenofovir/emtricitabine (Truvada).

All participants in this open-label study received 400mg sofosbuvir plus 90mg ledipasvir, taken as a once-daily coformulation, for 12 weeks. They were followed for an additional 12 weeks after completing treatment to assess sustained virological response (SVR12), or continued undetectable HCV RNA.

The overall SVR12 rate in this study was 96%, similar to rates seen in the ION HCV mono-infection studies. Rates were very similar for treatment-naive and treatment-experienced participants (95% and 97%), and for people with and without cirrhosis (94% and 96%). The 20% of patients who were found to have NS5A resistance-associated variants at baseline had a 94% cure rate (no NS5B-resistant variants were detected).

Ten people relapsed after the end of treatment, two experienced treatment failure due to poor adherence, one was lost to follow-up and one died of a presumed unrelated cause.

In a multivariate analysis, the only factor that significantly predicted relapse was black race/ethnicity – in fact, all 10 relapsers were black. This disparity was not seen in the ION mono-infection trials, in which 99% of black patients were cured, but their numbers may have been too small to see an effect. The researchers have not determined why this was the case, but further analysis including genetic sequencing and genome-wide association studies are underway.

Sofosbuvir/ledipasvir was generally safe and well-tolerated. There were two serious adverse events due to advanced liver disease and one death, but no treatment discontinuations due to adverse events. The most common side-effects were headache (25%), fatigue (21%), diarrhoea (11%) and nausea (10%).

Participants in the study maintained stable CD4 counts and none had confirmed HIV rebound. Because they were taking tenofovir, their kidney function was carefully monitored. Four participants (1%) had small creatinine increases, of whom two completed HCV treatment with no regimen change, one reduced their tenofovir dose and one stopped tenofovir.

David Wyles from University of California at San Diego presented results from the ALLY-2 trial looking at sofosbuvir in combination with a different NS5A inhibitor, Bristol-Myers Squibb's daclatasvir.

The sofosbuvir plus daclatasvir combination performed well in early studies, but Gilead decided to halt development of this regimen in order to focus on its own NS5A drug, ledipasvir. Once sofosbuvir was approved and on the market, however, Bristol-Myers was able to move forward with phase 3 clinical trials.

An advantage of daclatasvir is that it is active against multiple HCV genotypes (known as 'pangenotypic') while ledipasvir is primarily active against genotype 1. This is important because while genotype 1 is most common in Europe and the US, other genotypes predominate in other countries with high hepatitis C burdens.

All participants received once-daily 400mg sofosbuvir plus daclatasvir. ALLY-2 enrolled two cohorts: 151 previously untreated patients (including prior use of sofosbuvir) who received the regimen for 8 or 12 weeks, and 52 treatment-experienced patients all of whom received the 12-week course.

In the 8-week arm, SVR12 rates also varied by ART regimen, with those taking darunavir/ritonavir (Prezista) doing worse. Wyles suggested this might be due to sub-therapeutic drug levels, as the ritonavir did not boost daclatasvir as much as expected. There was no difference, however, in the 12-week arms.

Here too, treatment was generally safe and well-tolerated. There were no deaths or adverse events leading to treatment discontinuation and serious adverse events were uncommon (0-3%). Most patients maintained HIV suppression and stable CD4 counts.

Speaking at a CROI press conference, both Naggie and Wyles noted that their studies saw response rates in these participants with HIV and HCV co-infection as high as those for people with HCV mono-infection in other trials. This supports recent hepatitis C treatment guidelines recommending that HIV-positive and HIV-negative people should be treated the same for hepatitis C.

"These are really exceptional cure rates and they are very safe regimens," Naggie said. "ION-4 and ALLY-2 offer great options for people who are co-infected."

It remains unclear how sofosbuvir plus daclatasvir will be used in clinical practice, given the availability of Harvoni. The difference between the full (non-discounted) US cost of sofosbuvir alone and Harvoni for 12 weeks is US$10,500 – likely less than the price of daclatasvir. Wyles suggested that it may be beneficial, especially for people with co-infection, to use two separate pills rather than a coformulation so that drug doses can be adjusted independently.

Daclatasvir appears to be active against a wider range of HCV genotypes than ledipasvir, though press conference moderator David Thomas of Johns Hopkins suggested that there have been too few patients with other genotypes in clinical trials to get definitive answers. Genotype 3 patients who have cirrhosis remain a difficult-to-treat population. Further, Gilead is working on a new coformulation of sofosbuvir and a next-generation NS5A inhibitor with pangenotypic activity (GS-5816).