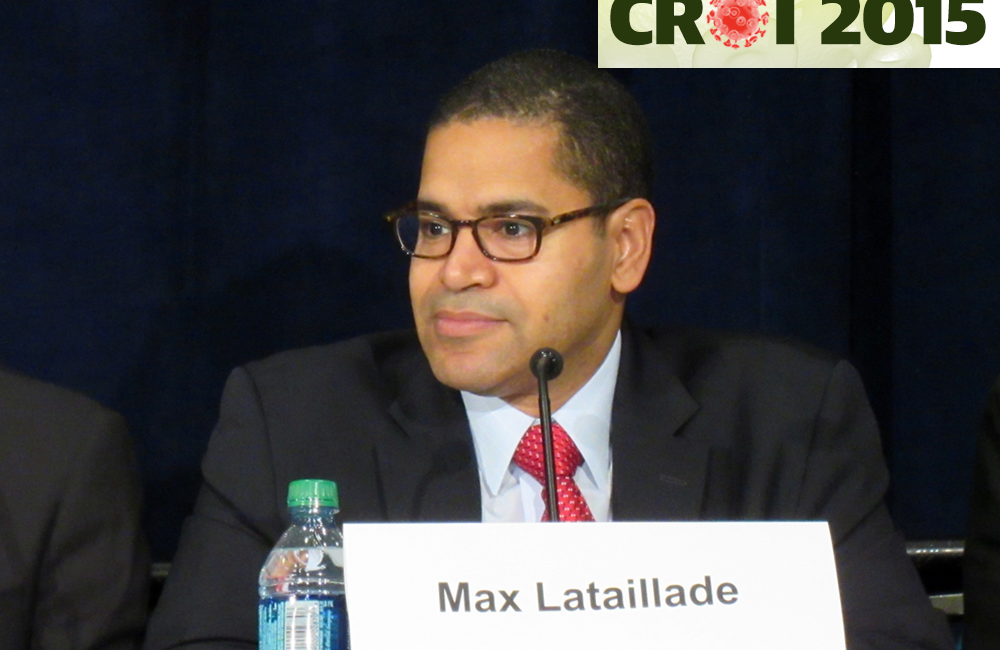 Max Lataillade presenting at CROI 2015. Photo by Liz Highleyman, hivandhepatitis.com
This article is more than 8 years old. Click here for more recent articles on this topic

A second-generation HIV maturation inhibitor, BMS-955176, demonstrated good safety and high potency, including activity against viral strains that were not susceptible to an earlier drug in this class, researchers reported yesterday at the Conference on Retroviruses and Opportunistic Infections (CROI 2015), taking place this week in Seattle, USA.

Combination antiretroviral therapy consists of drugs that target different steps of the HIV lifecycle, but none of the currently approved agents act on viral assembly, maturation and release from host cells. Drugs that work in new ways could be particularly beneficial for highly treatment-experienced people with HIV who have extensive drug resistance.

As HIV replicates, it uses the cell's machinery to produce large polyproteins which are then cut up by protease enzymes and assembled into new virus particles. The final steps include forming a capsid around new viral RNA and budding out through the cell membrane, resulting in a mature virus surrounded by an outer envelope.

Maturation inhibitors like BMS-955176 interfere with protease cleavage between the p24 capsid protein and a smaller peptide in the Gag polyprotein, leading to the release of immature virus particles that cannot complete their lifecycle and are not infectious.

A company called Panacos, later acquired by Myriad Pharmaceuticals, previously worked on an older maturation inhibitor, bevirimat (also known as PA-457 or MPC-4326). Bevirimat showed promising antiviral activity in early studies, but it was hampered by formulation problems and more than half of study participants had virus with reduced susceptibility due to naturally occurring Gag variations. Myriad halted development of bevirimat in 2010.

Max Lataillade from Bristol-Myers Squibb and colleagues designed a phase 2a proof-of-concept study to evaluate BMS-955176, a second-generation maturation inhibitor that appears to overcome these difficulties.

Early studies showed that BMS-955176 binds tightly to the Gag polyprotein, has greater potency than bevirimat and remains active against HIV with a variety of Gag polymorphisms. It has a long half-life allowing for once-daily dosing and no significant safety issues have been identified so far.

This study, conducted in Germany, enrolled 60 previously untreated participants with HIV-1 subtype B, the most common type in Europe and the US (subtype C is more common in much of Africa and Asia, and is responsible for the worst global epidemics).

BMS-955176 demonstrated an overall dose-response relationship. While the 5mg dose was similar to placebo, potency then increased with doses up to 40mg, where it stabilised. The largest decline was seen in the 40mg dose group.

BMS-955176 was substantially more potent than bevirimat, and its antiviral activity was similar against wild-type HIV and virus with baseline Gag polymorphisms that led to failure of bevirimat.

A majority of participants still had viral load at least 1 log below the baseline level at one week after the end of BMS-955176 treatment, likely due to the drug's long half-life, Lataillade said.

BMS-955176 was generally safe and well-tolerated at all doses tested. There were no deaths, serious adverse events, study discontinuations due to adverse events, grade 3 or 4 drug-related side-effects or clinically relevant laboratory abnormalities.

"BMS-955176 is a potent, once-daily, second-generation maturation inhibitor with a maximum median decline in plasma HIV-1 RNA of 1.7 log10 copies/ml at the 40mg dose," the researchers concluded.

Based on these findings, a phase 2b study of BMS-955176 is expected to start in the second quarter of this year.

Lataillade said that BMS-955176 had overcome serum binding issues that were problematic for bevirimat and the new drug is suitable for use in coformulation – practically a necessity in the era of single-tablet regimens for HIV.