Stigma, access and testing: why HIV is still rising in Europe 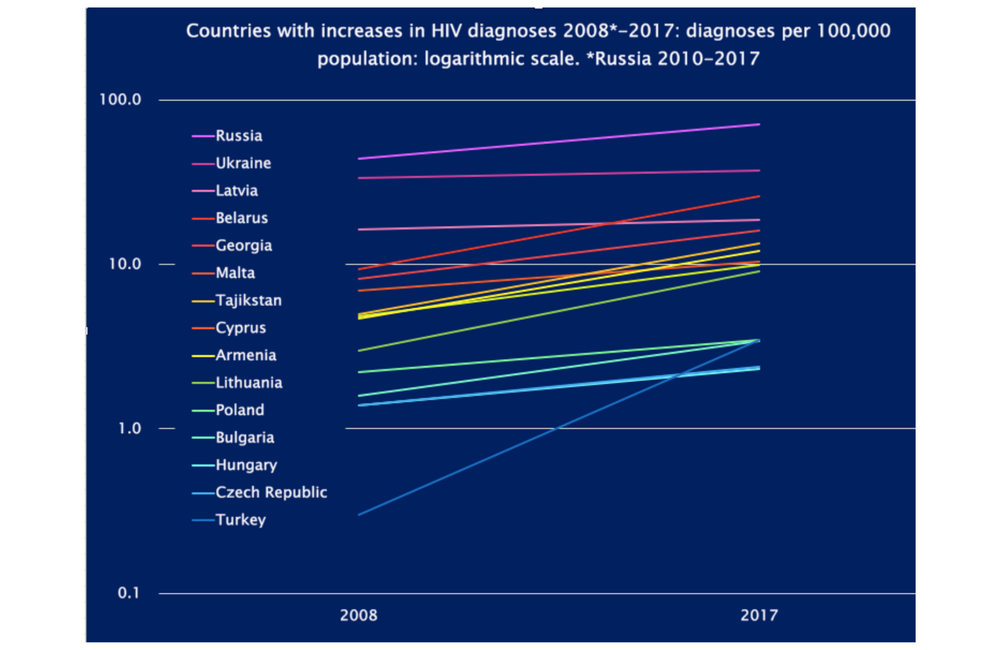 The latest annual surveillance report by the European Centre for Disease Prevention and Control (ECDC) shows that Europe maintains its distinction as the World Health Organization region with the largest increase in HIV cases in a year, and one of only two of the six global regions (the other being the Middle East and north Africa) that has not seen cases decline. Two-thirds of all cases were in a single country: Russia, which had 65.5% of new diagnoses in the European region, even though it only has 16% of its population.

Access to treatment remains the biggest single reason for the ongoing epidemic in Russia and much of the rest of eastern Europe. Countries like Russia have long had high rates of HIV testing and it is estimated that 86% of people with HIV in Russia are diagnosed. However, only 36% are linked to care.

The reverse is true in the countries grouped together as 'central Europe' in the report, which stretch from Poland down to the Balkans and also include Turkey, Israel and Cyprus. Here, although there have been reports of drug stockouts from Romania and Serbia, medical treatment for those diagnosed is generally adequate but testing rates have historically been low and half the people with HIV in central Europe may be undiagnosed.

The ECDC report also confirms that a number of countries in western Europe are starting to see quite significant falls in HIV diagnoses.

Last year ECDC counted 159,420 new diagnoses of HIV in the WHO Europe region, which includes Siberia and the central Asian countries, an increase of 5313 or 3.4% over the previous year.

There has also been a slight increase in the rate of diagnosis in Ukraine, and significant increases in Belarus, where cases have tripled since 2008, and Georgia, where they have doubled. Russia and Ukraine between them account for three-quarters of all HIV diagnoses in Europe. The largest proportional increase in diagnoses was in Turkey, where diagnoses have risen more than tenfold since 2008, though from a very low base.

The rate of diagnosis per head of population is a better guide to changes in the epidemics of countries in a region with widely differing populations and rates of population change. Last year one in 1406 Russians was diagnosed with HIV, compared with one in 1493 the previous year.

Ukraine has roughly half this rate with one in 2702 people diagnosed a year. Although numerically Ukraine had only 15% as many new cases as Russia, the number of new diagnoses there has increased by 10% since 2016 and its rate per head has increased by 22%. This is disappointing in a country that has seen some intensive programmes to improve access to treatment.

If Russia is excluded, then the 55018 cases recorded in the rest of the WHO Europe region, despite some other countries seeing increases, represent a 9% decrease in the annual total relative to 2008 and a 6.4% decrease since last year.

This is because the increases in eastern Europe were counterbalanced by decreases in a number of western European countries, especially Portugal, Spain, the United Kingdom, Switzerland and the Netherlands. In these countries, the annual number of new diagnoses has almost halved since 2008. 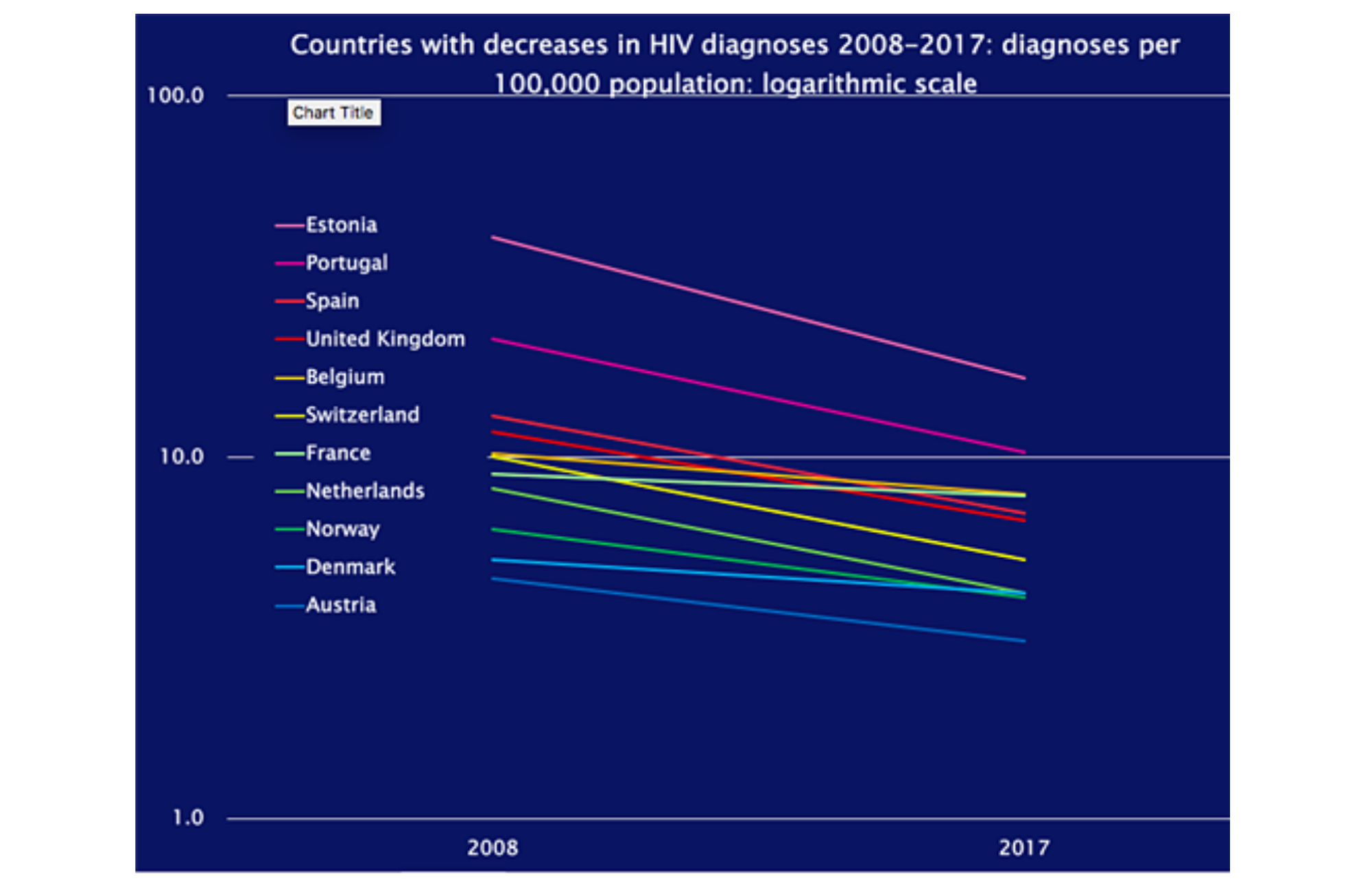 France saw a smaller decline and there was no clear decline in Italy. There were increases in Ireland and Malta, while data problems prevented Germany reporting this year.

AIDS cases fall, even in Russia

There are a few glimmers of hope in the east, though. The rate of increase in Russian diagnoses has slowed down. While the number of new diagnoses in Russia jumped by 15% between 2015 and 2016, last year’s increase was 6.5%.

In contrast in the western European region, which contains the countries west of the old “iron curtain”, the proportion of people who had an AIDS-related illness declined from 2.1 per 100,000 in 2008 to 0.7 in 2017 or one in 143,000. But 89% of these cases were in people diagnosed with AIDS or who developed an AIDS-related condition within three months of diagnosis. If these are excluded, only 320 people in the EU developed an AIDS-related condition despite medical care in 2017. This is a rate of one new case of AIDS in 1.3 million people in the general population.

The continued under-recording of gay men

A number of countries in central Europe do not always record the risk group people belong to (i.e. their route of transmission). For instance 60% of people diagnosed in Poland had no route of transmission recorded. However, as far as we can tell there has been a doubling of new diagnoses in gay and bisexual men, and increases of 43% in both heterosexuals and people who inject drugs. However numerically there are not many cases among people who inject drugs in central Europe and most of this increase is due to an outbreak in Romania.

In eastern Europe there has been 36% decrease in cases among people who inject drugs, but an eightfold increase in cases in gay and bisexual men. However while there undoubtedly have been increases in gay male cases in countries like Georgia (where HIV prevalence in gay men in the capital is 25%), Armenia and Ukraine, almost no cases were recorded as being due to sex between men until the last few years, so it is possible that some of the increase is due to people’s risk group being more accurately recorded in certain countries.

Still only 3% of HIV infections in Russia, and 4% in the rest of eastern Europe, are attributed to sex between men, compared with 21% over the whole WHO Europe region excluding Russia. And there is other, indirect evidence that gay and bisexual cases are still being under-recorded, especially in Russia. While there was a 69% increase since 2008 in diagnoses in heterosexuals in eastern Europe, the increase was 21% in women but 107% in men. This suggests that because of stigma, a lot of gay and bisexual men, and maybe some men who inject drugs, are still presenting as acquiring HIV through heterosexual sex.

Providing another illustration of how exceptional the situation in Russia is, while female heterosexual cases rose 21% per head of population in eastern Europe including Russia since 2008, if Russia is excluded, they fell by 7%, from a peak of about 20,000 in 2009 to 17,000 last year. One in two women in Europe diagnosed with HIV last year was Russian. One piece of good news is that mother-to-child transmission is becoming rare. There were only 136 cases in the whole of the EU/European Economic Area last year, and 397 in the WHO Europe region. While 42 children born with HIV were diagnosed in the UK last year, all were infected abroad and the UK has seen no cases of in-country mother-to-child transmission for two years.

An increasing proportion of diagnoses are made in migrants – 37% of people in the EU/European Economic Area were diagnosed in a different country from their birth country. While there have been falls in diagnoses in people from sub-Saharan Africa, there have been increases in people from Latin America, south and south-east Asia, and other European countries. In the UK, Ireland, Sweden, Denmark, Belgium and France, as well as in some smaller countries like Malta, Cyprus and Luxembourg, more than half of HIV diagnoses are in people not born there.

However, this does not mean migrants are bringing HIV into Europe with them. Only a few countries record the likely country of infection, as well as the country of origin. But what figures we have suggest that people from all regions of the world are now more likely to acquire HIV in their European host country than their country of origin. For instance, while people of sub-Saharan African ethnicity accounted for 23.7%, 21.5% and 18.5% of new diagnoses in Belgium, Ireland and the UK last year, only 9.3%, 10.4% and 11.3% of diagnoses in those three countries respectively were in people probably infected in sub-Saharan Africa (and those figures include people of all ethnicities, including people travelling or working in Africa).

European Centre for Disease Prevention and Control (ECDC) and WHO Europe. HIV/AIDS surveillance in Europe 2018 (2017 data)