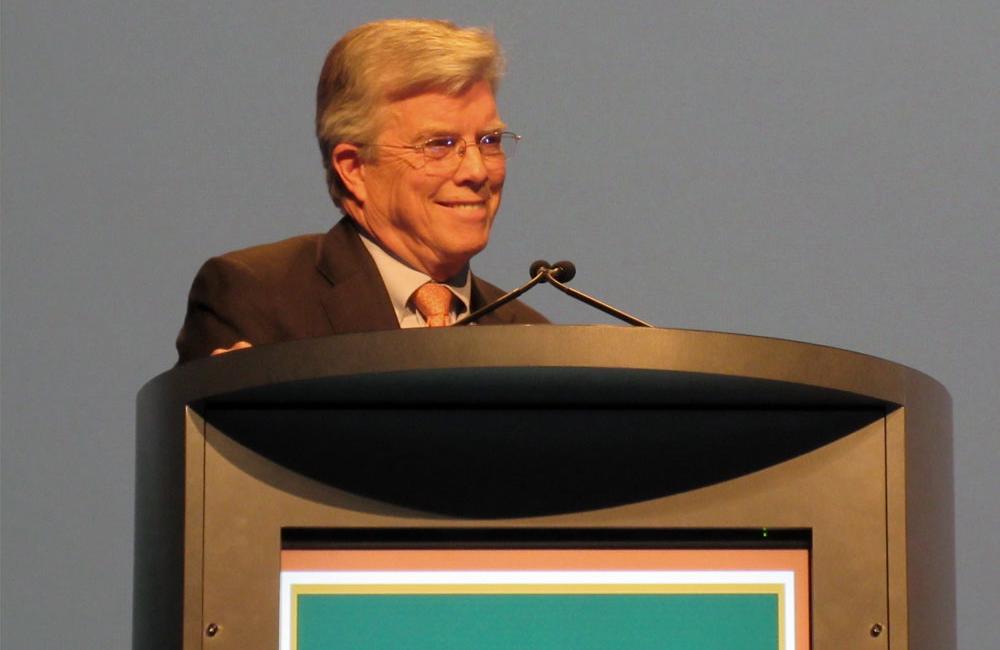 Donald Jensen speaking at the American Association for the Study of Liver Diseases (AASLD) Liver Meeting. Photo by Liz Highleyman, hivandhepatitis.com.
This article is more than 7 years old. Click here for more recent articles on this topic

Regimens containing sofosbuvir (Sovaldi) – including sofosbuvir plus simeprevir (Olysio) – work well for people with hepatitis C genotype 1 in real-world use, which to date has included some of the patients most urgently in need of treatment at the dawn of the interferon-free era, according to a pair of presentations at the American Association for the Study of Liver Diseases (AASLD) Liver Meeting last month in Boston, United States. Sofosbuvir plus ribavirin alone is highly effective for people with genotype 2.

The advent of direct-acting antivirals (DAAs) that target different steps of the hepatitis C virus (HCV) lifecycle has brought about a revolution in treatment. While these drugs can improve effectiveness and shorten treatment duration when added to interferon-based therapy, many patients and providers have held out for all-oral regimens that avoid interferon and its difficult side-effects.

Researchers with the HCV-TARGET Study Group and the TRIO Health network presented findings on real-world use of currently approved new DAAs suitable for use in all-oral regimens. (The first-generation HCV protease inhibitors boceprevir [Victrelis] and telaprevir [Incivo or Incivek] must be used with interferon.)

Gilead Sciences' nucleotide HCV polymerase inhibitor sofosbuvir is among the most effective of these new drugs. While sofosbuvir plus ribavirin alone works well for people with easier-to-treat HCV genotype 2, those with harder-to-treat genotypes including 1 or 3 may need to add interferon or other DAAs.

Janssen's next-generation HCV protease inhibitor simeprevir (Olysio) was approved around the same time as sofosbuvir – late 2013 in the US and the first half of 2014 in Europe. These drugs were not initially indicated for combined use and this regimen has not been through phase 3 trials. However, the phase 2 COSMOS trial showed that sofosbuvir plus simeprevir taken with or without ribavirin for 12 weeks cured more than 90% of previously untreated and treatment-experienced genotype 1 patients with or without cirrhosis.

Guidelines developed by both European experts and American specialists recommend sofosbuvir plus simeprevir for people with HCV genotype 1 who are unwilling or unable to take interferon. This combination was included in the European approval of simeprevir and this month received supplemental approval from the US Food and Drug Administration (FDA). However, the recent approval of Gilead's sofosbuvir/ledipasvir coformulation (Harvoni) offers an at least equally effective and less expensive option for people with HCV genotype 1.

In an oral abstract session devoted to currently approved HCV therapies, Donald Jensen from the University of Chicago Medical Center presented findings on the real-world experience of people undergoing treatment with sofosbuvir-containing regimens in HCV-TARGET, a consortium of more than 50 academic and community medical centres in the US, Canada and Germany.

A total of 2330 people with hepatitis C consented to be included in HCV-TARGET, and of these 2063 started treatment. Nearly two-thirds were men, 76% were white, 12% were black and the average age was 58 years; 2% had HIV co-infection. About half were previously untreated for hepatitis C and half were treatment-experienced, including 18% who did not respond to a prior course of triple therapy with first-generation protease inhibitors.

Given the high cost of sofosbuvir and simeprevir, and the various restrictions on their availability and insurance coverage, experts recommend that people with advanced liver disease be prioritised for treatment, and that was reflected in this population. Nearly half (48%) had liver cirrhosis, 43% had a history of decompensation and 34% had a MELD score >10. One in ten had liver cancer and 11% had received a liver transplant. Overall, people who used sofosbuvir plus simeprevir were sicker than those who used sofosbuvir with pegylated interferon/ribavirin or with ribavirin alone.

Treatment was administered according to local standards of care, and patients and providers chose which regimens to use:

Overall, 78% of participants completed therapy and 18% were still on treatment. Only 3% stopped treatment prematurely, mostly due to adverse events (2.1%), and this was not more likely to occur among people taking interferon. Early discontinuation due to lack of efficacy (0.4%), loss to follow-up (0.3%) or death (0.6%) was rare.

Nelson reported sustained virological response rates for patients who had reached week 4 after completion of treatment (SVR4). While SVR4 is generally reflective of outcomes at 12 weeks post-treatment (SVR12), it is too soon to declare a cure as relapse may still occur. Among the subset of patients with both SVR4 and SVR12 results available (n = 259), concordance or agreement was 94-98%.

Further breaking down the genotype 1 population who used sofosbuvir plus simeprevir, SVR4 rates were 86% for people with HCV subtype 1a and 95% for those with easier-to-treat subtype 1b. Among evaluable patients with prior treatment failure (n = 54), the SVR4 rate was 81% (85% for people without cirrhosis vs 79% for people with cirrhosis).

Among genotype 2 patients treated with sofosbuvir plus ribavirin (n = 187), the SVR4 rate was 90% (91% for people without cirrhosis vs 88% for people with cirrhosis). Genotype 3 patients were not included in this report because most received longer treatment and were still undergoing follow-up for sustained response.

In a minimally adjusted multivariate analysis, predictors of sustained response to sofosbuvir plus simeprevir with or without ribavirin included HCV subtype 1a, prior liver decompensation, lower baseline albumin level (a marker of poor liver function) and prior treatment failure using triple therapy.

Overall, sofosbuvir-containing regimens were generally safe and well-tolerated. Serious adverse events were uncommon across all regimens (2.9 to 7.9%).

The most frequent side-effects were fatigue, headache and nausea. Flu-like symptoms were more common in the pegylated interferon arm, while anaemia was reported more often among patients taking ribavirin.

"There was a high percentage of 'off-label' use of sofosbuvir/simeprevir," and real-world data were "generally consistent" with phase 2-3 clinical trial data, the researchers concluded.

Adverse event rates for all-oral regimens were "much lower" than those with pegylated interferon, they added, with the lowest frequency observed for interferon-free and ribavirin-free regimens.

The network obtained data from a total of 1211 people seen by 231 providers at 150 practices. This analysis focused on 955 people taking 12-week regimens:

About 60% were men, most were white, 16% were black and the average age was 57 years. Dieterich noted that the population had a lower proportion of men and more African-Americans than typical hepatitis C drug trials. Nearly three-quarters had HCV genotype 1, 22% had genotype 2 and about 5% had genotypes 3-6.

Most people with genotype 2 HCV (89%) received sofosbuvir plus ribavirin alone, while people with genotype 1 usually also included either pegylated interferon or simeprevir. Dieterich noted that many providers stopped using ribavirin with sofosbuvir plus simeprevir after the COSMOS results presented at this year's International Liver Congress showed that it did not significantly improve cure rates but did add side-effects.

Among the 955 treated patients, most (92%) completed therapy, 44 discontinued treatment early, 25 were lost to follow-up, nine died and one received a liver transplant.

Overall, 79% of participants achieved SVR12 in an intent-to-treat analysis of patients with sufficient follow-up time (n = 822), rising to 88% in an as-treated or per-protocol analysis of people who completed the full course of treatment (n = 743).

Looking at the treatment-experienced genotype 1 group, intent-to-treat SVR12 rates did not differ between people with HCV 1a and 1b, regardless of regimen. Here, people without cirrhosis did better than people with cirrhosis whether they used sofosbuvir plus pegylated interferon/ribavirin (76 vs 62%) or sofosbuvir plus simeprevir (87 vs 76%).

Two-thirds (67%) of the 22 patients with HCV genotype 4, 5 or 6 treated with sofosbuvir plus pegylated interferon/ribavirin were cured. There were not enough genotype 3 patients to analyse (n = 7).

In this large, real-life population, SVR12 rates for 12-week regimens were "comparable to data reported in clinical trials," the researchers concluded, and "cirrhosis is the most important predictor of response."

Dieterich added that the cure rates seen in this real-world analysis were "much higher than I had predicted."