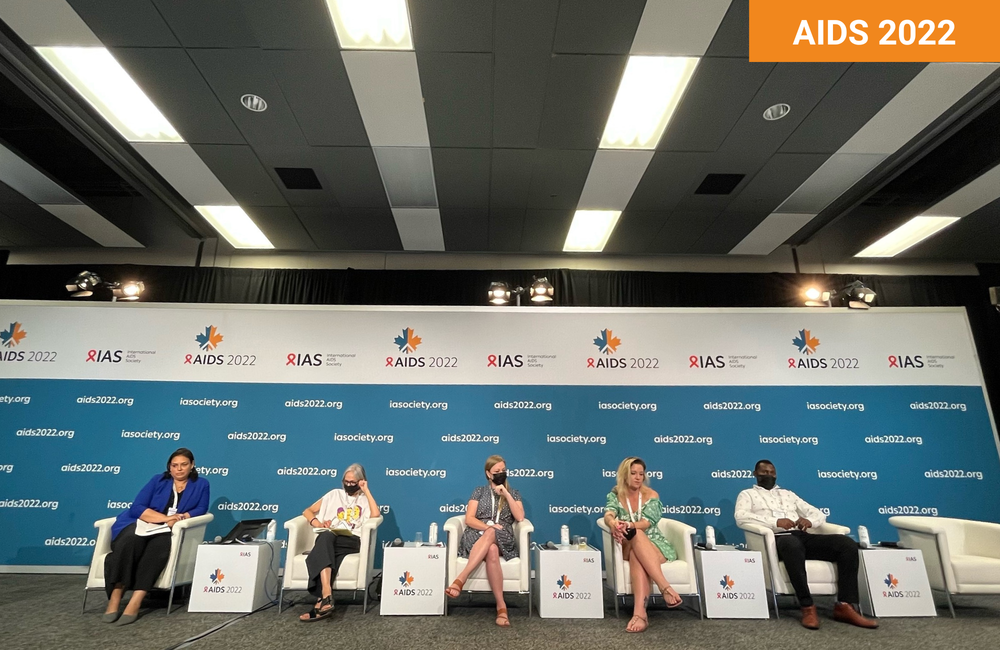 The session's community panel at AIDS 2022. Photo by Oğuzhan Nuh.

In a session at the 24th International AIDS Conference (AIDS 2022) last week, priorities and lessons learnt from the harm reduction programmes for people who inject drugs in Africa were discussed by a community panel followed by three case studies from Mozambique, Kenya, and Nigeria.

Dr Cassia Wells from ICAP at Columbia University pointed out that what policy makers describe as differentiated service delivery moves away from a 'one size fits all' model for HIV services. This involves tailoring HIV services for different groups of people living with HIV and people who are at higher risk of acquiring HIV. Differentiated service delivery for people who inject drugs must include harm reduction services in addition to other services that are available to people living with HIV, including but not limited to testing, treatment, and care services. The two essential harm reduction services are needle and syringe programmes and opioid substitution therapy (medication to reduce dependency and prevent withdrawal). Services may be provided through drop-in centres, mobile outreach, clinics, peer-led outreach, and community-led services.

People who inject drugs are disproportionately affected by HIV, accounting for 9% of all new HIV infections in the world. In 2020, the United Nations Office on Drugs and Crime estimated that there are 950,000 people injecting drugs in Africa, among whom the prevalence of HIV and hepatitis C is 11% and 19%, respectively. By 2030, a 40% growth is expected in the number of people who inject drugs in the region. However, missing data on prevalence and UNAIDS key cascade indicators hinders policy development and service delivery, with a few countries in western and central Africa being some of the only ones able to provide accurate data. Local laws also prevent development and delivery of services to people who inject drugs in the region: in 2020, no countries in the region permitted drug possession and only two had anti-discrimination laws for people who use drugs.

Ahmad Said from the African Network of People who Inject Drugs touched on the remaining challenges due to current regulations. For instance, community-led service delivery remains very limited, as certain services can only be provided by certified healthcare professionals. Opioid substitution therapy is referred to as medication-assisted treatment in many countries whose laws don’t allow for opioids to be mentioned.

Kate Thomson from the Global Fund pointed out only ten countries in the region have implemented any needle and syringe programmes and eight had any opioid substitution therapy services. The existing services face various barriers and coverage issues. Community leadership and meaningful engagement are essential for increasing harm reduction services and policies in the region. “The Global Fund believes putting people at the centre of designing, implementations and monitoring programs not only makes services more comprehensive and more responsive to the needs of people who uses drugs, it also creates more enabling environment for greater service uptake,” she said.

Maria Simbine from Mozambique’s Ministry of Health presented results from a pilot harm reduction programme, started in 2018. Whereas HIV prevalence is 13% in the general population, it is 31% among people who inject drugs and is as high as 50% in Maputo, the capital. Needles and syringes, naloxone and preventative health services are available in community settings, with people referred to clinics providing treatment for opioid dependence, HIV, viral hepatitis, TB and STIs. In Sofala and Nampula, some services have been integrated into mental health services, while in Maputo a community wellness centre was opened. Over three years, 2696 people who use drugs, including 421 people who inject drugs, registered to receive services. Among those who inject drugs, 238 and 252 were tested for HIV and hepatitis C, respectively. In total, 313,652 clean syringes and 33,723 condoms were distributed. While the reach of the programme more than doubled between 2018 and 2019, it went down during the COVID-19 pandemic. Simbine also noted that one of the main challenges people who inject drugs in Mozambique face is criminalisation, as people are arrested and their treatments are interrupted.

Mary Mugambi from the Kenyan Ministry of Health gave an overview of one of the continent’s largest programmes for people who inject drugs. In Kenya, people who inject drugs have an HIV prevalence of 18.7%, whereas the general population has a prevalence of 4.9%. The number of people who inject drugs has been rising in recent years and is thought to now be around 36,000 people, of whom 11% are below the age of 18 and 15% are women. People who inject drugs are prioritised as a key population in the national strategy plan; needle and syringe programmes started in 2010, with medication-assisted treatment following in 2014. Methadone is now offered at eleven sites (including mobile vans and in prisons) across seven counties. Needles and syringes are provided by peer educators at these sites; some HIV and sexual and reproductive health services are available; and there are linkages with clinical services. Around 10,000 people have ever enrolled for medication-assisted treatment, with an average retention rate of over 70% in most quartiles, and some quartiles with 98% retention.

Dr Chris Akolo of FHI 360 presented the findings of the project implemented in Nigeria, where 9% of all new HIV infections are among people who inject drugs. HIV prevalence among people who inject drugs is 3.4% compared to 1.3% in general population. Differentiated services were launched as part of the programme including one-stop shop, drop-in centres, community pharmacies, home deliveries and dried blood sample collection for viral load testing. Peer navigators were involved in testing and antiretroviral therapy roll out, as well as leading support groups. While peer navigators are not permitted to offer harm reduction services at these sites, they referred people to other services. Over two years, 15,816 clients were tested for HIV, 1329 were diagnosed with HIV and all started HIV treatment. Around 1302 continued HIV treatment with a 97% viral suppression rate. Another 2841 people who inject drugs started PrEP.

Beyond the numbers, Angela McBridge from the South African Network of People who Use Drugs emphasised that “it is just not about the amount of people you are giving a service to, it is also about acknowledging their individuality as well as their humanity… I am a person first”. McBridge also highlighted the meaning of being a service provider as being “able to be a person to brighten another one’s day in the society… Because ultimately this is not about you as the service provider. It is actually about the person who is accessing the services.”

A common feature of the programmes presented was the targeted strategies to create an enabling environment for the community. In all programmes, communities were engaged not only as the users of the services but also as developers and implementers. The creation of an enabling environment includes engaging with community organisations as well as with police officers, judges and the media to reduce the stigmatisation of people who inject drugs and allow them to access services. Community members were able to support and provide services to their peers, to the extent determined by the local laws. Use of peer-led strategies improves the uptake of services by establishing a safer space but also leads to services being more responsive to the needs of the communities. Therefore, engaging with policy makers is of great importance as local laws and regulations may limit the development and integration of services needed by the community.