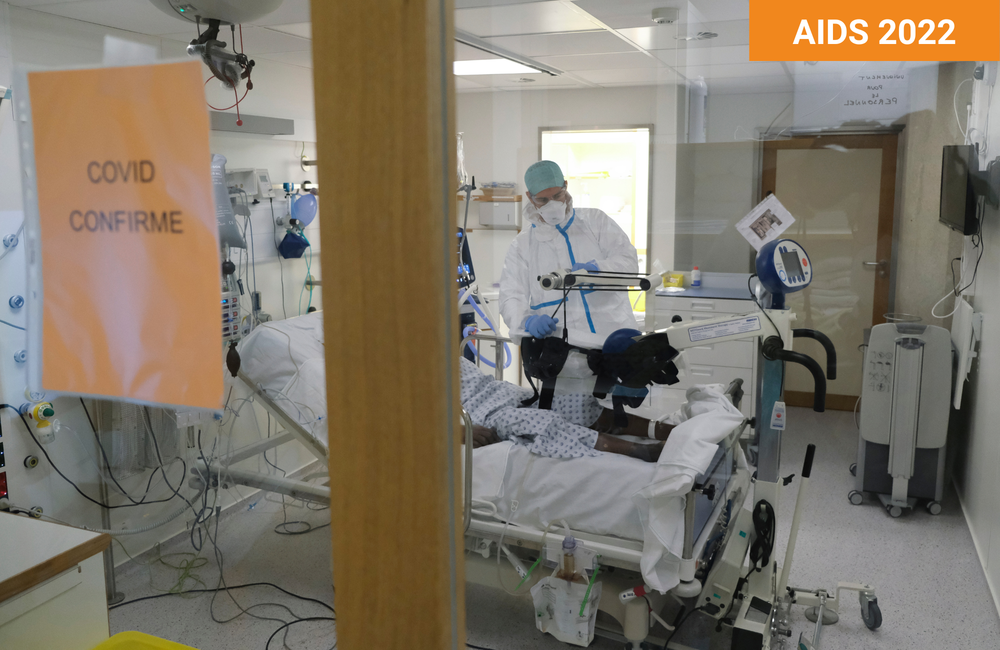 People with HIV remain at higher risk of dying after being admitted to hospital with COVID-19 and have not experienced the same decline in COVID-related mortality as HIV-negative people during the Omicron wave of the pandemic, a research team from the World Health Organization (WHO) reported this week at the 24th International AIDS Conference (AIDS 2022).

At last year’s IAS Conference on HIV Science, the same team presented results of a global analysis of data submitted to the WHO Global Clinical Platform on COVID-19, showing that people with HIV were more likely to be admitted to hospital with COVID-19 and 30% more likely to die after admission for COVID-19.

The updated study presented this week analysed further data submitted to the clinical platform from 50 countries on people hospitalised with COVID-19 from the beginning of the pandemic to May 2022. Data on HIV status of hospitalised patients was available for 42 countries, covering 362,841 people. Just over 8% (29,530) were living with HIV. Ninety-six per cent of the data on people with HIV came from Africa, predominantly from South Africa. This study was not able to collect data on vaccination status or previous COVID-19 illness, so it is not possible to say what effect they had on outcomes.

In the updated analysis, people with HIV had a 51% increased risk of dying after admission to hospital with COVID-19, a slightly higher rate than reported previously.

"The study findings emphasise the importance of promoting vaccination to people with HIV."

The WHO researchers also looked at changes in death rates over time. In 2020, during the Alpha and Beta variant waves of the pandemic, 24% of people with HIV and 21% of HIV-negative people died after hospitalisation with COVID-19. Death rates were similar in 2021 too, when Alpha, Beta and Delta variants predominated (24% and 22%, respectively). But in 2022, as the Omicron variant replaced previous variants, death rates diverged. Whereas the death rate after hospitalisation fell to 8% in the year to date in HIV-negative people, the death rate remains close to 20% in people with HIV (19.8%).

Dr Silvia Bertagnolio of WHO said that the continuing high death rate in people with HIV is also likely to reflect low vaccination coverage in the country contributing most of the data. By the end of 2021, 27% of South Africans had been vaccinated against COVID-19 and coverage is now estimated to have reached 32%. Bertagnolio said that vaccine coverage is still unacceptably low in sub-Saharan Africa, where 18% of the population have been vaccinated compared to a global average of 62%.

She said the study findings emphasise the importance of improving access to vaccination, promoting vaccination to people with HIV and making COVID-19 antiviral medication available for people with HIV to reduce the risk of severe outcomes.

She also stressed the importance of minimising exposure to COVID-19 among people with HIV, especially people with CD4 counts below 200 or co-morbidities, as well as ensuring uninterrupted antiretroviral treatment.

Preliminary results from the Ubuntu study of mRNA SARS-CoV-2 vaccination in South Africa, presented as a late breaker on the final day of AIDS 2022, reinforced the importance of minimising SARS-CoV-2 exposure in people with HIV.

Baseline screening results of the study, in which participants were tested for the virus before vaccination, showed that 31% of study participants screened during November and December 2021 at the beginning of the Omicron variant wave had positive SARS-CoV-2 PCR tests.

People with HIV with lower CD4 counts were at higher risk of being diagnosed with SARS-CoV-2 at baseline after adjusting for prior exposure, sex assigned at birth and temporal trend. Every tenfold reduction in CD4 count was associated with a doubling in the risk of a positive result. A person with a CD4 count of 50 had an approximately 50% probability of testing positive at baseline screening in December 2021 compared to a 25% probability in people with CD4 counts around 500.