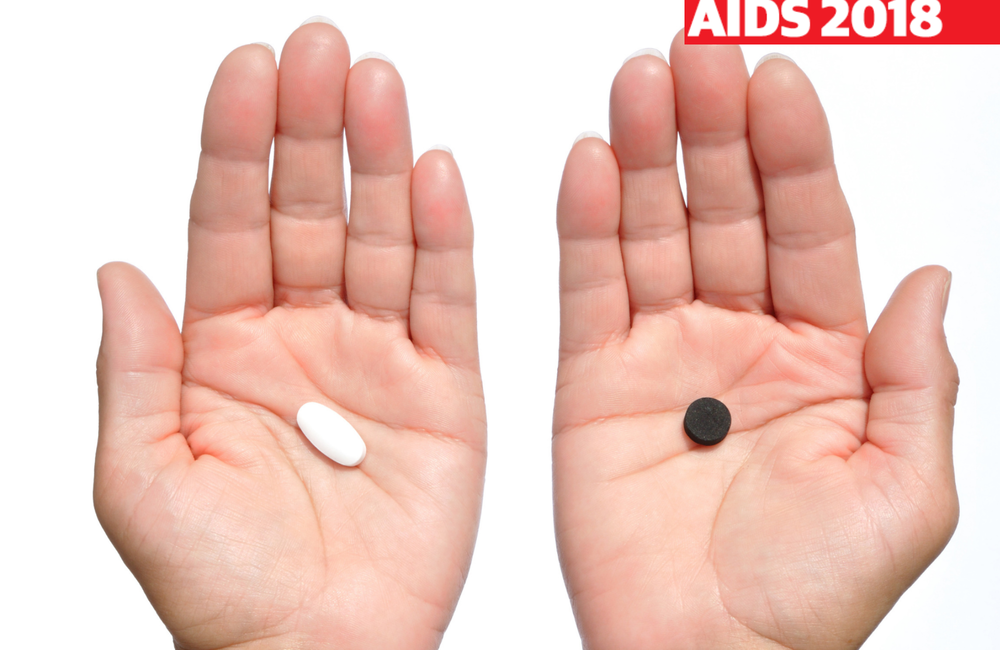 Using dolutegravir alone, as maintenance treatment after achieving undetectable viral load on a three-drug regimen, results in an unacceptable rate of viral rebound and is unethical in the view of many experts, the 22nd International AIDS Conference (AIDS 2018) heard last month.

The integrase inhibitor dolutegravir is a preferred component of three-drug antiretroviral regimens, along with abacavir/lamivudine or tenofovir/emtricitabine. Several studies have been designed to test whether simplifying treatment to dolutegravir alone (monotherapy) is as effective as three-drug treatment. Simplified regimens might result in fewer long-term side-effects, as well as costing less.

Previous attempts to use boosted protease inhibitors as maintenance monotherapy failed to show equivalent effectiveness to three-drug regimens. Dolutegravir has been investigated as monotherapy owing to its potency and the high barrier to the development of resistance to the drug.

The French MONCAY study recruited adults with fully suppressed viral load (< 50 copies/ml for at least 12 months) on a regimen of dolutegravir/abacavir/lamivudine (Triumeq) and no history of AIDS-defining illness or nadir CD4 cell count below 100 cells/mm3.

Participants were randomised to continue their existing three-drug single-tablet regimen (n = 80) or simplify to dolutegravir 50mg once daily (n = 78).

The primary outcome of the study was the proportion of participants with viral load below 50 copies/ml at week 24.

Study participants had been on antiretroviral treatment for a median of 8 years in the dolutegravir arm and 9.4 years in the three-drug arm, having taken a median of four regimens in the dolutegravir arm and five in the three-drug arm. Seventeen per cent of those in the monotherapy arm had prior exposure to another integrase inhibitor, either raltegravir or elvitegravir. No information on drug resistance or prior virological failure was reported.

The week 24 analysis of the study showed that dolutegravir monotherapy was non-inferior to three-drug treatment; 94% of participants had a viral load below 50 copies/ml in the monotherapy arm compared to 96% in the three-drug arm by intent-to-treat analysis. Two cases of virological rebound above 50 copies/ml had occurred by week 24 in the dolutegravir arm compared to none in the three-drug arm (both participants subsequently resuppressed viral load after returning to three-drug treatment and did not develop integrase inhibitor resistance mutations).

One participant in the three-drug arm discontinued the trial drugs at week 4 due to drug-related mood disturbance. The remaining participants not counted as virally suppressed at week 24 comprised four people who withdrew from the study and one protocol violation.

However, the week 24 results provide an excessively optimistic picture of the effectiveness of dolutegravir monotherapy. Participants were followed for a further 24 weeks and during that period a further five cases of virologic rebound occurred in the monotherapy arm, leading the study’s Data and Safety Monitoring Board to halt the study in December 2017.

In two of the five cases, participants developed new integrase inhibitor resistance mutations. In one case a participant reported 100% adherence to study treatment at week 4, but at week 36, experienced a viral rebound to 46,300 copies/ml.

Participants who experienced virological rebound were significantly more likely to have a low nadir CD4 cell count (p = 0.004), a low CD4 count at study screening visit (p = 0.027) or a positive PCR signal (i.e. viral load was detectable but too low to quantify) (p = 0.026).

The DatAIDS research group has shown previously that a positive but unquantifiable viral load is associated with a greater risk of viral rebound in people with viral load below 50 copies/ml. In this study, multivariate analysis showed that participants with a positive but unquantifiable viral load were eight times more likely to experience viral rebound on dolutegravir monotherapy (OR 8.2, 95% CI 1.4-68.6).

Ten per cent of participants in the three-drug arm and 8% in the monotherapy arm experienced drug-related adverse events.

The study investigators concluded that dolutegravir monotherapy is not safe enough to be used as a management strategy in any patients – but went on to question whether a study of the strategy in patients with high CD4 cell counts and optimal virological control might still be warranted.

The second study of dolutegravir monotherapy investigated whether monotherapy might maintain viral suppression most effectively in people who had begun treatment during primary infection. Might a smaller HIV reservoir and less viral diversity reduce the risk of viral rebound when antiretroviral treatment is reduced to one drug?

The Swiss Early Simplified study, of simplification after at least 48 weeks of a three-drug regimen that had been initiated during primary infection (less than 6 months after infection), randomised 101 participants either to continue three-drug treatment (n = 33) or to switch to dolutegravir monotherapy (n = 68). Participants had begun antiretroviral treatment a median of 35 days after infection, had been taking antiretroviral treatment for a median of 3.6 years and the median nadir CD4 cell count prior to treatment was 358 cells/mm3.

The primary outcome of the study was the proportion of participants with viral load below 50 copies/ml at week 48. Per-protocol analysis showed that 100% of participants in both study arms maintained viral suppression. However, the per-protocol analysis excluded one participant in the dolutegravir monotherapy arm who should not have entered the study owing to an incorrect diagnosis of primary infection, and who experienced virological rebound at week 36 of the study. Viral load was resuppressed when treatment was intensified with the addition of abacavir and lamivudine.

No serious adverse events related to the study drug were reported.

The designs of the two studies were strongly criticised by members of the audience. Dr Joe Eron of the University of North Carolina criticised the use of a 10% inferiority margin – the extent to which dolutegravir would have to under-perform in three-drug therapy for the study to be halted early on safety grounds – in switch studies, arguing that it posed an unacceptable risk to patients.

Dr Laura Waters of London’s Mortimer Market Centre also drew attention to the risk attached to switch studies for participants doing well on their existing treatment, especially the risk of cross-class resistance if a new treatment regimen fails. She pointed out that a high proportion of the virological failures developed integrase resistance mutations.

Simon Collins of HIV i-Base drew attention to the unpredictability of viral rebound in the study – in the context of a trend towards less frequent viral load monitoring, this factor would place people at risk of developing cross-class resistance and also of transmitting HIV to their partners.

Despite the unpredictability of rebound, the Swiss study will continue for four years, a decision which surprised many in the audience in the light of the findings presented at AIDS 2018 and previous conferences.