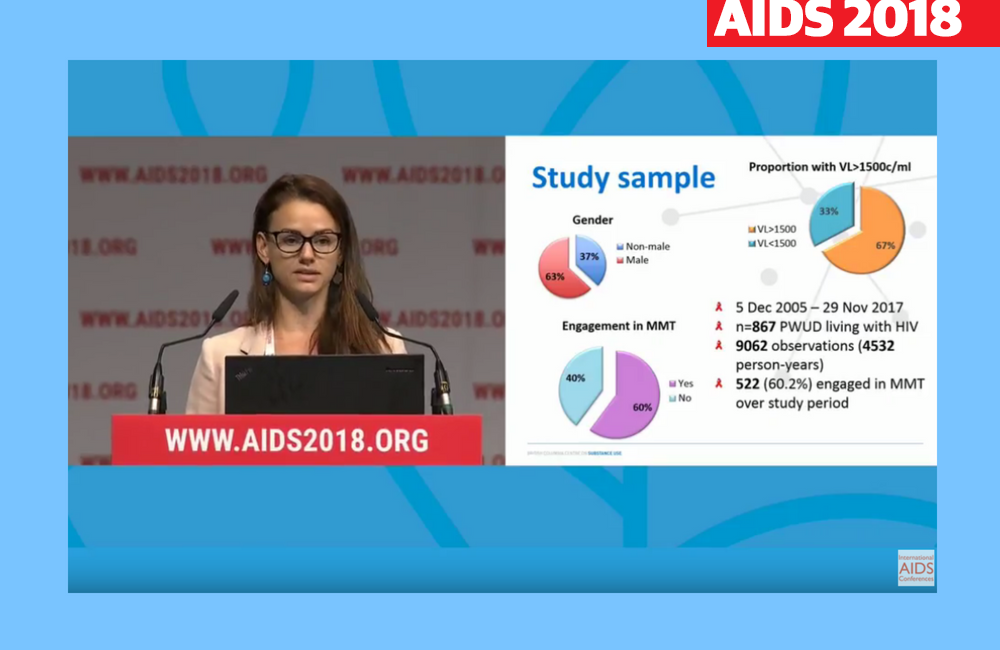 Image from the webcast of Brittany Barker presenting at AIDS 2018.

Methadone is an opioid substitution treatment prescribed to minimise the harms associated with the use of heroin or other opioids. Methadone maintenance treatment also promotes improved adherence to antiretroviral treatment and retention in care in people living with HIV who use drugs. Buprenorphine, an alternative to methadone, is widely prescribed in France and North America.

To answer this question, researchers from the British Columbia Centre on Substance Use looked at the relationship between the time spent accessing methadone maintenance treatment through low-threshold facilities – those that make it as easy as possible for drug users to obtain methadone – and the time spent with a viral load above 1500 copies/ml.

The study population was drawn from a British Columbia cohort, the AIDS Care Cohort to Evaluate Access to Survival Services (ACCESS), of people living with HIV who use illicit drugs. All participants in the cohort study taking antiretroviral therapy were eligible for inclusion in this analysis if they had at least two viral load measurements. Viral load was routinely sampled every six months. These measurements were linked to antiretroviral prescription dispensing records and to self-reports of methadone uptake.

The study population comprised 867 people who used drugs in care between 2005 and 2017. The study accumulated 4532 person-years of follow-up; during this period 60% of participants received methadone maintenance treatment for at least some of the time. Sixty-three per cent of the study population was male.

Presenting the findings, Brittany Barker, a PhD candidate at the University of British Columbia, said that methadone maintenance treatment is a key intervention for reducing onward HIV transmission in the community and that the group’s findings support the scale-up of evidence-based addiction care, including the reduction of barriers to methadone or buprenorphine prescribing by non-specialist physicians.

Seventeen maps compiled by Pew Charitable Trusts illustrate how hobbled methadone clinics are by a web of federal and state regulations that are not based in evidence, reinforce stigma and significantly limit access.
Filter
28 Sep 22
Drug policy & policing