HIV infection is a risk factor for liver fat accumulation 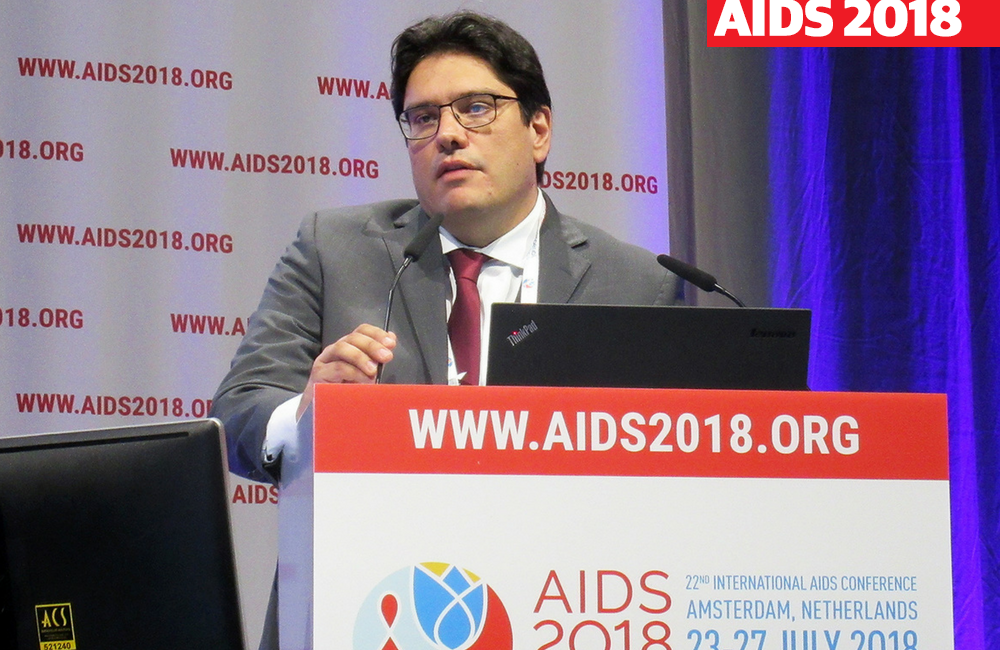 People living with HIV are about twice as likely to develop steatosis, or fat accumulation in the liver, even if they don't have hepatitis B or C co-infection, according to a study presented at the recent 22nd International AIDS Conference (AIDS 2018) in Amsterdam.

Liver disease is a major cause of morbidity and mortality among people living with HIV. Hepatitis B or C virus (HBV or HCV), heavy alcohol consumption, certain antiretroviral medications and other causes of liver injury can lead to the development of liver fibrosis, cirrhosis and steatosis. But these can also occur without such liver-specific risk factors. Previous studies have seen steatosis rates among people with HIV ranging from around 35% to 75%.

Hugo Perazzo of Fundação Oswaldo Cruz in Rio de Janeiro and colleagues evaluated the prevalence of and risk factors associated with liver steatosis in people with HIV mono-infection –  that is, those without HBV or HCV co-infection – compared with HIV-negative individuals.

The study drew from 649 people with HIV followed at the National Institute of Infectology (INI/Fiocruz) and 15,105 HIV-negative people in the Brazilian Longitudinal Study of Adult Health (ELSA-Brasil) cohort.

In the HIV-positive group 58% were men, 23% were black or 'Pardo' (mixed race) and the median age was 44 years. The median body mass index (BMI) was 24.4 (25 and above is considered overweight) and a third had metabolic syndrome, a cluster of cardiovascular risk factors including abdominal obesity, hypertension (high blood pressure), high blood glucose and abnormal lipid levels.

A total of 333 HIV-positive participants were paired with an equal number of HIV-negative people. Although they were approximately matched based on demographic characteristics and metabolic factors, there were some significant differences. The HIV-positive group was younger, had fewer women, were less likely to be black/Pardo and were more likely to have diabetes, while the HIV-negative group had higher average BMI and were more likely to have abnormal lipids, hypertension and metabolic syndrome.

For each participant, the researchers calculated a Fatty Liver Index (FLI) score based on laboratory and physical exam findings including triglyceride and gamma-glutamyl-transferase (GGT) liver enzyme levels, BMI and waist circumference. Liver steatosis was defined as an FLI of 60 or higher.

More than a third of the participants with HIV (35%) were found to have steatosis. HIV infection was an independent risk factor, doubling the likelihood of having fatty liver, Perazzo reported.

HIV-positive people with steatosis were, on average, older, had higher BMI and waist circumference, had a higher CD4 count and had been on antiretroviral therapy (ART) longer than those without. There were no significant differences related to nadir (lowest-ever) CD4 count, current ART regimen or current viral suppression.

About two-thirds (68%) of the HIV-positive people with steatosis had metabolic syndrome, 46% had abnormal lipids, 46% had hypertension, 41% had diabetes and 54% were described as having 'poor clinical management'.

They recommended that management of metabolic risk factors should be integrated into HIV care to decrease the burden of liver diseases in this population.

In response to a question, Perazzo said that FibroScan, an imaging method for assessing fibrosis and steatosis, was not available at the time of the study. Session moderator Marina Klein of McGill University in Montreal noted that researchers are looking for more accurate non-invasive biomarkers of fatty liver as it becomes a more prevalent cause of serious liver disease in people with and without HIV.

As people with HIV age, their risk of heart attack increases far more if they also have untreated hepatitis C virus, even if their HIV is treated, according to new research published today in the Journal of the American Heart Association.
Medical Xpress
21 Sep 22
Opportunistic infections

“We were surprised to see such a rapid increase in diabetes incidence and prevalence in just 10 years,” Dr. Amanda Willig says.
Physician's Weekly
17 Sep 22
Cancer

Researchers reviewed 23 years of healthcare information from more than 19,000 people with HIV in Ontario. Despite decreases in AIDS-related cancers, people with HIV had a 20% greater risk of cancer.
CATIE
15 Sep 22
Cardiovascular disease

Although it is known that individuals living with HIV infection have an increased risk for cardiovascular disease, the underlying pathology behind this observation remains unclear, the authors of a new analysis say.
Medscape (requires free registration)
14 Sep 22
More editors' picks