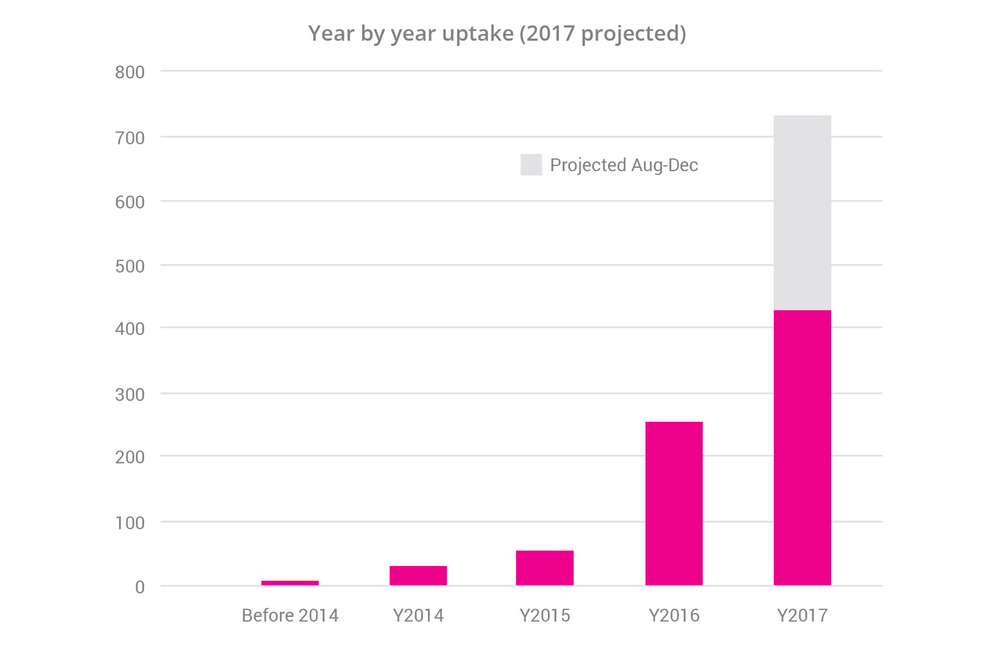 A survey of people currently using pre-exposure prophylaxis (PrEP) has found that PrEP use has rapidly accelerated in the last year, with more than half of those surveyed starting since the beginning of 2017. The short survey was conducted by PrEP advocacy sites iwantPrEPnow and PrEPster, with assistance from Public Health England.

The study finds that the vast majority of people using PrEP are currently buying it online but intend to switch to join the 10,000-strong PrEP IMPACT trial when it starts, which NHS England announced yesterday should happen "by September".

A large majority of survey respondents (61%) would want to get their PrEP from a London-based clinic and a majority of Londoners (68%) say they would prefer to get it from one single clinic – 56 Dean Street in London’s Soho district.

The survey was conducted in ten days, from 19 to 28 July 2017. It was distributed to approximately 3300 people who had signed up to the iwantPrEPnow website saying they wanted regular updates on the IMPACT trial. Only people who were currently, or had at some point, taken PrEP and were currently living in England were eligible.

There were 766 responses, which gives a response rate of nearly one in four – very high for an internet survey. Will Nutland, co-founder of PrEPster said, "The caveat we should add to this survey is that the most motivated current PrEP users - or potential users - will sign up to a mailing list, and the most engaged of them will respond to a survey. As such, this survey might not reflect broader demand for PrEP. But what it does show us for sure is that there are 700 people who are intending to start on the trial, and they are intending to start within a month of the trial enrolling."

Nearly all were male, including four transgender men. Two women, one of them transgender, answered the survey while four respondents, three of whose gender was not the same as at birth, preferred to define their gender another way or were non-binary, yielding a maximum eight respondents (1%) who were trans*.

Most (95%) were men who had sex exclusively with men but 22 (3%) had sex with men and women and two with women only. Twelve people preferred not to say.

Most participants (95%) had taken PrEP in the last year and the rest had done so at some point in the past.

Greg Owen, co-founder of iwantPrEPnow said, "This survey for the first time gives us a much clearer picture about the number of PrEP users in England. Now we know where people are buying their PrEP from, we can extrapolate from the sales of Dynamix - the only supplier that provides us with sales data to the UK. We've been estimating for the past few months that between 6-8,000 people are buying PrEP online in the UK and that figure is substantiated by the data from the survey."

The vast majority (86%) were buying PrEP online and of these 52% were buying it from iwantPrEPnow’s preferred suppliers Dynamix International, with 31% from United Pharmacies and 11% from All Day Chemist. Will Nutland, co-founder of PrEPster said, "Not everyone who currently self-sources PrEP will meet the criteria for enrolment on to the trial. As such, we'll continue to provide information about how to obtain PrEP safely and legally online, and work with clinical colleagues to ensure that PrEP support continues to be provided to PrEP users who are not on the trial."

The minority who were not sourcing PrEP online were getting it via repeated post-exposure prophylaxis (PEP) prescriptions (10%), from friends (8%), via private doctors’ prescription (3%) or from an informal contact (2%). (People could give more than one reply to this question, so this adds up to more than 100%.)

A large majority (85%, 651 people) said they would hope to switch to the PrEP IMPACT trial as soon as it started, ideally within the first month, while a mere 11 respondents said they would not switch and would continue to buy PrEP online, or stop PrEP.

Participants were asked to select from a list of sexual health clinics which one they would be likely to go to for PrEP. This gives an idea of respondents’ location. A majority (59%) said they would use clinics located in greater London, with 68% of those – 40% of all respondents – saying they would prefer to go to one particular clinic – 56 Dean Street in Soho.

In terms of other geographical areas, 114 participants (30 from Brighton) would use clinics elsewhere in the South East, 51 (34 from Greater Manchester) clinics in the North West, 44 in the East or West Midlands, and 22 in Yorkshire or Tyneside, with smaller numbers from the South West (mainly Bristol) and East Anglia (mainly Cambridge). 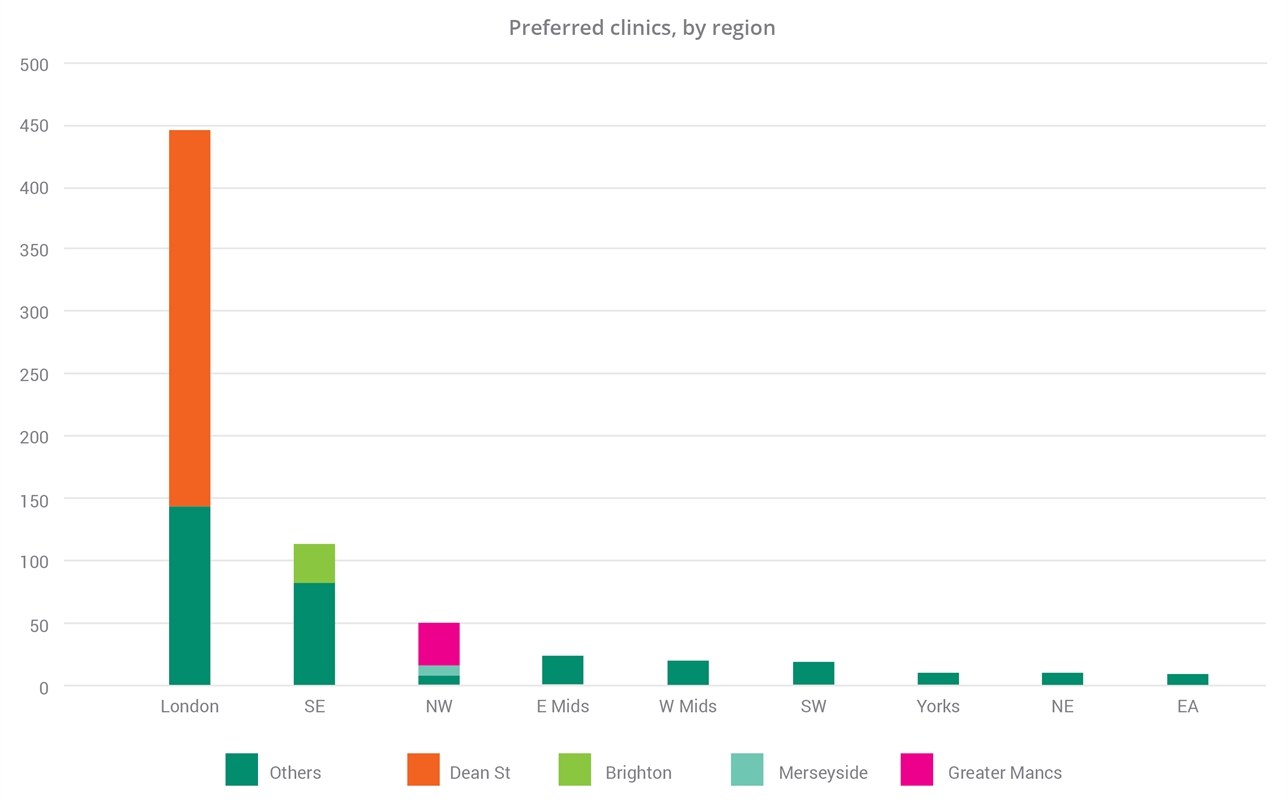 While this survey may give an indication of where demand for PrEP is likely to be highest, it leaves some questions unanswered. One is how predictive it is of the total number of people who may come forward for PrEP when IMPACT starts. PrEPster and iwantPrEPnow estimate that, from other surveys and based on their contact figures, there could be over 8000 people using PrEP in England regularly or intermittently right now, which could imply that the 10,000-strong IMPACT trial, which is intended to last three years, could fill up very fast.

The other unanswered question is how to reach and interest the minority of people in need of PrEP who are not gay men: women with HIV-positive partners, recently arrived immigrants, transgender people and others known from the data to be at risk. It is striking, for instance, how few transgender people answered this survey, despite there being a dedicated clinic for trans people at 56 Dean Street.

Marc Thompson, co-founder of PrEPster said, "This survey reminds us that those who want to get PrEP as soon as the trial starts are those who are already engaged with PrEP advocacy. The survey doesn't tell us about how women, trans people, or people who are not white are currently using PrEP, nor how they might use it. It's another call to all of us with roots into those diverse communities to take action to ensure that they know about PrEP, and can access the trial."

The intention is that IMPACT will reserve 1000 places for people who are not gay men and projects will be developed to reach out to them. What happens if the trial fills up rapidly and there is pressure to fill the other 1000 places is a dilemma the trial oversight committee and its community advisory group will have to address.