Searching for the next ‘Berlin patient’: doctors document bone-marrow recipients with HIV 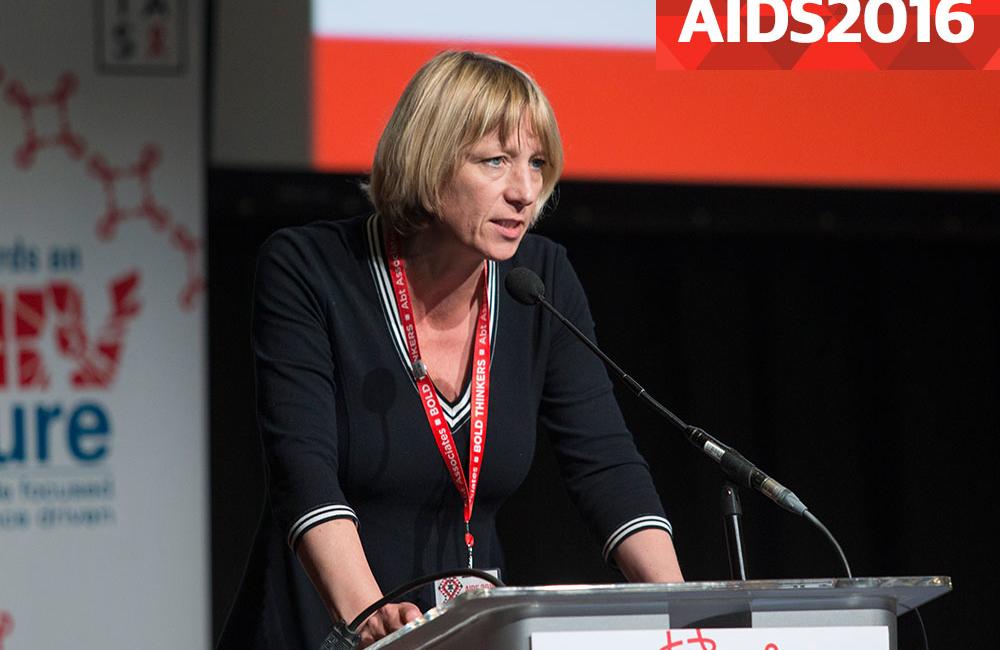 Annemarie Wensing presenting at the Towards a Cure Symposium. Photo©International AIDS Society/Rogan Ward

The ‘Berlin patient’, Timothy Ray Brown, has now survived seven years off antiretroviral therapy with no sign of HIV reappearing in his body, and as time passes his position as ‘the person cured of HIV’ becomes more secure.

The 2016 Towards a Cure Symposium held in advance of the 21st International AIDS Conference (AIDS 2016), however, heard about the work of a consortium of physicians and researchers who are searching for, and documenting, the fates of people with HIV who, like Timothy Brown, have been given stem-cell transplants, in an effort to abolish Brown’s distinction as the only person to be cured of HIV.

There have been disappointments along the way: it appeared in 2013 that we might have two more stem-cell transplant recipients who were controlling HIV off treatment, but there was disappointment in 2014 when it was revealed that in both cases, their viral load had reappeared.

Stem-cell transplantation will almost certainly never be a cure option for most people with HIV. It is a highly risky procedure itself, as it involves basically deleting or near-deleting the patient’s immune system with radio- and chemotherapy. It is only a last-resort option in people with cancers of the immune system like lymphoma and leukaemia; Brown nearly died from the procedure himself.

With the patient’s immune cells thus ‘ablated’, they are then replaced with a donation of the stem cells that are the progenitors of all other immune-system cells. These cells come either from bone marrow cells from adult donors, or from stem cells found in blood taken from the umbilical cords of newborn babies, who have them in abundance. The advantage of cord blood cells is that they do not have to be matched genetically to their recipients; adult ones must be, to avoid rejection.

In some cases including Brown’s, the donor cells have come from the 1.0 to 1.5% of people of north European descent (and less than 0.2% elsewhere) who happen to have the so-called CCR5-32 double-delete (homozygous) mutation, which confers resistance to HIV infection. These people lack the CCR5 receptor on their T-cells that the vast majority of HIV viruses have to latch on to in order to infect the cell. People may also have the single-delete (heterozygous) mutation, which does not confer immunity to HIV but does lead to a slower rate of disease progression in untreated people with HIV.

It is not certain though if this is a necessary condition for an HIV cure: another theory is that a phenomenon called graft-versus-host disease, in which the graft cells destroy remaining host cells, and which is normally an undesirable complication of transplantation, may be necessary.

The EPISTEM consortium is a group of European researchers based in seven clinics in five countries.

Annemaire Wensing of Utrecht University in the Netherlands said that EPISTEM was set up with four main aims. Firstly, to guide doctors on clinical procedures to use for HIV bone-marrow recipients, to share the hypersensitive assays used in cure research, and to explore the ethical issues involved in procedures that could cure HIV but are themselves very risky and performed on very sick patients, and to search for donors and screen them for the delta-32 mutation.

Nearly 30,000 cord blood units in multiple European blood banks and more than 1,000,000 adult donors have been genotyped for CCR5 to generate a registry of CCR5-32-deletion available donors.

The other aim is to study people who have been given or are being considered for stem-cell transplants and evaluate their viral responses.

EPISTEM has identified 24 patients so far, 15 who have had transplants. So far they have come from Canada, the UK, Spain, the Netherlands, Belgium, Germany and Italy, with other possible patients identified in Brazil, Serbia and Sweden.

To underline how sick these patients are, and the gravity of the decision to give them a transplant, only six of the 15 patients are currently still alive. Eight died within four months of receiving their transplant and another one 2.5 years afterwards. Patients either die directly from uncontrolled cancer or from opportunistic infections brought on by immune suppression pre-and post-transplant.

Of the six not dead, one is alive five months, one 14 months, three approximately three years, and one five years after transplant. They all show signs of very low HIV DNA in their cells, as did most of the patients who did not survive.

Typical HIV-positive people starting antiretroviral therapy see a decline in the HIV DNA in their blood lymphocytes (the class of cells that includes T-cells) from an average of 900 to about 400 copies per million cells during the first few years, but this soon levels out and declines no further.

In individuals there is great natural variability in the amount of HIV DNA ‘seeded’ in cells and in the 15 EPISTEM patients, the amount of RNA at day one varied from 2 to 2000 copies per million cells. However, by three months after transplantation (most still being alive at that point), nearly all had no measurable HIV DNA in their cells (i.e. less than one copy per million cells), and after 200 days, there was only one detectable DNA reading in any patient.

Only two of these six patients had transplants of cells with the CCR5-32 double-delete mutation, the other four were ‘wild type’.

Dr Wensing reviewed the three longest-surviving patients in detail, two who have survived more than three years post-transplant and one more than five years. One of them received cord blood stem cells and two matched-donor bone marrow cells. Only one of them received cells with the CCR5-32 double-delete mutation, the other two received wild type. The two matched-donor cell recipients, one with CCR5-32 double-delete, one with wild-type cells, have undetectable HIV DNA in all samples.

So far, however, none have been taken off antiretroviral therapy. As with another study presented at the Cure Symposium of women treated in very early infection, this will be the crucial moment when we find out whether the patients can control HIV without antiretroviral therapy, or indeed have any at all.

Clearly we hope for another Timothy Ray Brown, and it would be even more exciting if the wild-type recipient stayed undetectable after treatment interruption, but researchers have not yet set criteria or a date for stopping.

This study was also presented at the main AIDS 2016 conference.