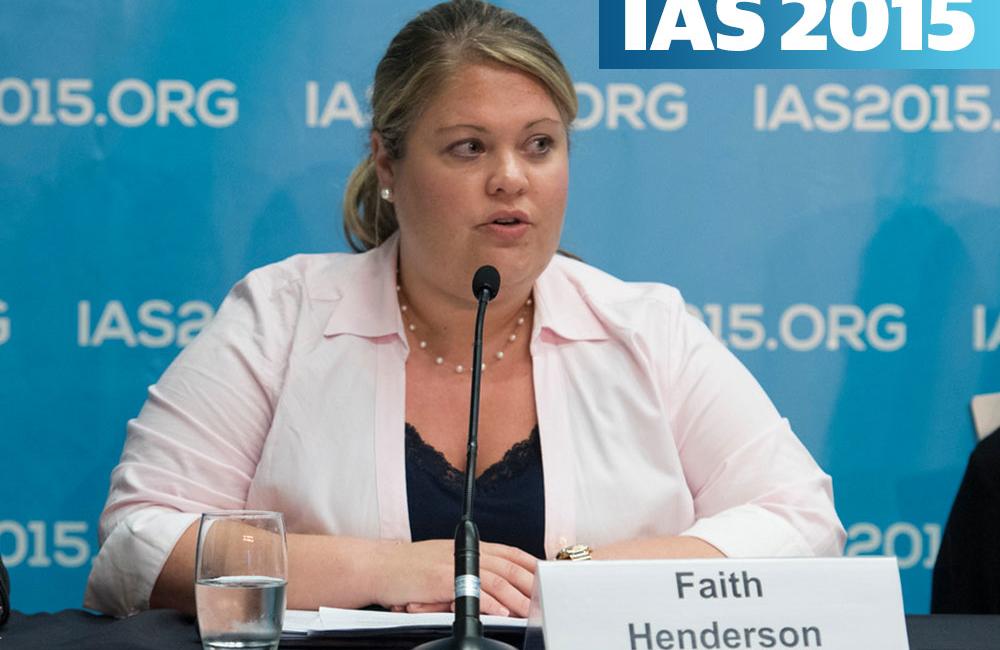 Faith Henderson at IAS 2015 photo ©Marcus Rose/IAS
This article is more than 7 years old. Click here for more recent articles on this topic

A study of open-label Truvada HIV pre-exposure prophylaxis (PrEP) in Botswana among heterosexual people found very high adherence rates. Around 90% of participants had useful levels of the drug in their blood; there was a high concordance between self-reported adherence and drug levels; and there were no HIV infections, the Eighth International AIDS Society Conference on HIV Pathogenesis, Treatment and Prevention (IAS 2015) was told last month.

The participants had all previously taken part in the TDF2 placebo-controlled study of PrEP which took place between 2007 and 2011 and found an efficacy of 62% for PrEP versus placebo.

For the present study, attempts were made to contact all the 1219 participants in the original TDF2 study. Presenter Faith Henderson of the US Centers for Disease Control and Prevention (CDC) commented that, with a three-year gap and a highly mobile population in Botswana, it was hard to contact all participants. However, 736 TDF2 participants (60%) were eventually traced. Of these, 229 (31%) were eligible to take PrEP using the same criteria as the original TDF2 study – which, in this very high-prevalence country, were that they were between 19 and 39 years old (90% in TDF2 were in fact in their 20s) and were sexually active. The main reasons for exclusion were that the person was now HIV positive, had blood results indicative of kidney disease or, for women, that they were pregnant or breastfeeding.

Truvada and condoms were dispensed once a month and participants were tested for HIV and received risk-reduction counselling once every three months. Participants also received text messages or phone calls as adherence reminders.

Of the 229 people enrolled, 60% completed ten or more of the maximum of twelve monthly study visits and the number of patient-years of data collected was 76% of the possible maximum. Fifty-six per cent of participants were male, and women were about 60% more likely not to complete the study – the reasons why are being investigated in qualitative studies. The only other factor associated with non-completion was that people who experienced significant side-effects were twice as likely not to complete the study.

Self-reported adherence was high. When asked if they had taken Truvada in the last three days before their clinic visit, 88% said they had taken it all three times, 5.5% once or twice and 6.7% had taken none.

In a subset of 30 participants, the proportion of people with levels over 25ng/ml were 93%, 93%, 100%, 93% and 90% at months one, three, six, nine and twelve of the study, so there was no or little evidence of any falling-off in adherence. Women were 9% less likely than men to have clinically useful tenofovir blood levels and people who did not report any condomless sex also had slightly lower adherence, though this difference was not significant.

No HIV infections occurred in any study participant. Although this was not designed as an efficacy study, five or six HIV infections would have occurred if background HIV incidence was at the rate seen in the placebo arm of the original TDF2 study (3.1% a year).

Further drug level analysis and qualitative data will be presented, but – although there must be a big caveat about the use of text and phone reminders in this study – it does show that high and effective adherence levels to PrEP can be reached among an African heterosexual population who are in need of it.

The big question now is whether the Botswana government and other agencies will extend their already impressive level of antiretroviral therapy provision to people with HIV to cover PrEP provision for the proportion of HIV-negative people who remain at significant risk.