Which interventions are best to reduce HIV infections among drug users? 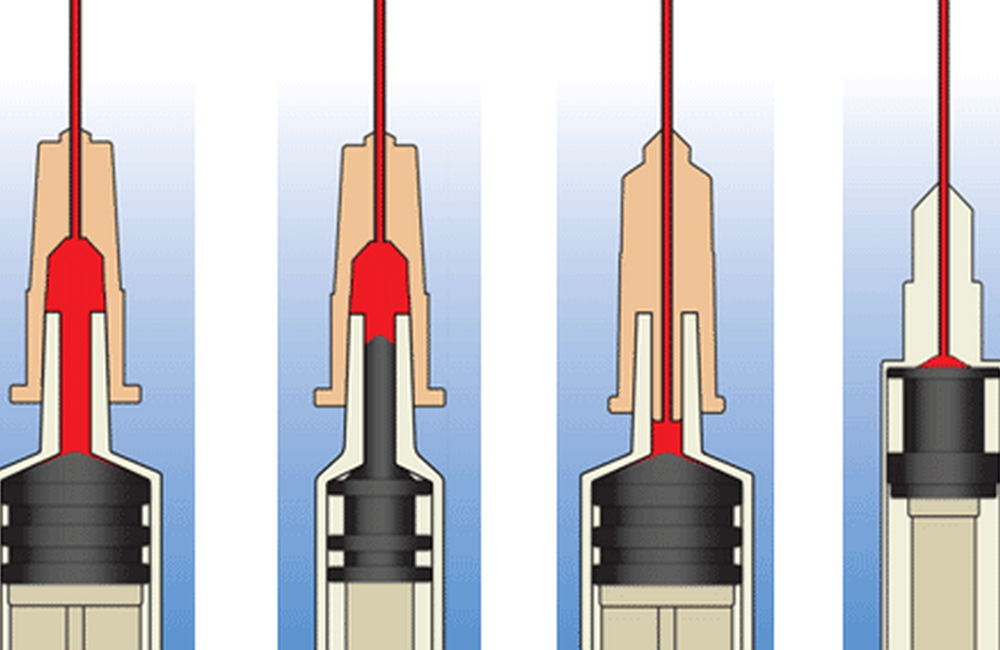 An image from the presentation of William Zule illustrating how syringe design can affect the amount of blood collected and transmitted when sharing needles.
This article is more than 9 years old. Click here for more recent articles on this topic

HIV infections among drug users currently make up 30% of new infections globally. Their social marginalisation makes them an especially difficult group to target for public health and HIV interventions. Yet researchers, civil society, and drug user organisations are considering innovative strategies to reduce the risk of HIV infection.

Presenting at a panel entitled "Evidence-Based Prevention for Injecting Drug Users: It Works!," which took place last week at the 19th International AIDS Conference (AIDS 2012), David Wilson of the University of New South Wales said that needle-syringe exchange programmes were cost-effective, resulting in either stable or reduced prevalence of both HIV and hepatitis C.

Looking at eight countries in Europe and Asia, Wilson did a "post-op" retrospective analysis of data from 2005 to 2010. Citing the example of Tajikistan, Wilson said that the onset of needle-syringe exchange programmes resulted in a reduction in self-reported sharing of syringes; while hepatitis C prevalence dropped significantly, HIV prevalence remained stable. But Wilson estimates that the epidemics would have boomed were it not for these programmes: he expects that prevalence of both would have been 20 to 30% higher among drug users in the country. Wilson says this reduction will result in future financial savings, given a reduction in new infections, treatment and death.

Noting variance, overall Wilson said that considering reduction in prevalence, "[needle-syringe exchange programmes] are exceptional…in terms of their value for money." As of 2010, the average cost per syringe distributed was US$0.32; the average cost of reaching an additional drug user was $60.

But more could be done. Wilson noted that while average spending on programmes increased by 300%, overall per capita distribution was still low, with the average of only a few dozen syringes given per drug user per year. Kazakhstan is the only exception, having "saturated" the population.

Despite successes, harm reduction programmes are battling to keep people enrolled. Xiaobin Cao of the Chinese Centers for Disease Control and Prevention presented on loss-to-follow-up in China's methadone maintenance treatment programme, which has been widely congratulated for its massive - and fast - scale-up, with 749 clinics opening up in 28 provinces in under a decade. But while 145,000 drug users are served monthly, "the high drop out is one challenge that we are facing,” said Cao.

In a study considering 1511 drug users from 2004 to 2010, two-thirds of subjects dropped out over a period of six years. Cao noted that most participants who did leave left soon after their enrolment, primarily because of arrest or immigration; the drop-out rate remained stable after the first year and a half of the study period. Cao said that strong support from family members was key to ensuring continued participation; he also noted that long distance between the participant and clinic hindered long-term participation, as did relatively low daily dosage of methadone, and the presence of a drug user in the participant's life.

Two studies considered the use of peer-to-peer programmes in Asia. Vivian Go of the Bloomberg School of Public Health at Johns Hopkins University considered whether peer HIV/AIDS programmes helped to reduce syringe sharing and unprotected sex among Vietnamese intravenous drug users in Thai Nguyen Province. 924 participants were split into a control and intervention arm for a year-long study, with those in the latter receiving regular prevention messaging by former or current drug users through the use of interactive role plays, problem solving exercises, and goal setting, among other activities. These activities occurred for two hours a week for six weeks, with booster sessions at three, six, and nine months. All participants, regardless of whether they were in the control or intervention arm, were offered HIV counselling and testing (HCT) at baseline, three, six, nine, and twelve months.

In both the control and intervention arm, sharing of needles decreased; but when considering safe sex practices, those in the intervention arm experienced a sustained reduction in unprotected sex, whereas those in then control arm, while initially practicing safer sex, eventually discarded these practices later in the study follow-up period.

After doing a follow-up study to assess these results, Go concluded that this rise in unsafe sex practices in the control arm was due to missing HCT appointments. Participants who missed a session were more likely to practice unsafe sex, whereas those who attended all five continued safe practices. Comparatively, those in the intervention arm who missed a session continued to practice safe sex, which Go attributes to the success of the peer-to-peer programme.

As such, Go concluded that "peer network intervention may be effective in facilitating longer term sexual risk behaviour; but HCT may be sufficient for changing injection risk behaviours." She also noted that more research was needed into the effects of IDUs being involved in a study environment--either in the control or intervention arm--as regular follow-up visits in and of themselves may result in reduced risky behavior.

Lianping Ti, a Ph.D. student at the University of British Columbia, presented findings on a peer-to-peer HIV testing programme in Bangkok, Thailand. Current or former drug users were trained to offer pre- and post-test counselling, as well as a rapid HIV test, to drug users at Mitsampan harm reduction centre, a centre run for, and run by, drug users. Ti found that only 44% of drug users questioned were willing to undergo peer-provided pre-counselling; with only 38% willing to be given a rapid HIV test; and only 36% willing to have peer post-test counselling.

Still, Ti is heartened by these results, especially given that those who were willing to partake in activities are considered the most difficult-to-reach groups, such as those who engage in high-intensity drug use, and former prisoners. Ti says that peer-to-peer approaches may be tailored to reach the most marginalised, given their mistrust of the health system at large, and given wide-scale criminalisation of drug users, further pushing them under ground.

When it comes to HIV transmission, the difference between the two is intuitively obvious: the more dead-space a needle or syringe has, the more blood can be collected and transmitted; the lower amount of dead-space, the less blood can be exchanged.

Considering syringe use in 67 cities in 30 countries, Zule noted that the use of low dead-space syringes was associated with HIV epidemics among drug using populations exhibiting prevalence below 10%; whereas the use of high dead-space syringes was associated with HIV prevalence rates among drug using populations above 10%. Given this, Zule presented modelling which demonstrates that "HIV infections wouldn't occur, or would be reversed, if we went from using high dead-space needles to low-dead space needles."

Yet intravenous drug users prefer high dead-space needles and syringes; and also prefer needles that are removable. Currently low dead-space syringes are primarily available with fixed needles. In order to remedy this, Zule has contacted a manufacturer in the United Kingdom that can make standard syringes, which drug users prefer, but with removable low dead-space needles. This product has been found to be acceptable by users in Asia, and has "great promise," said Zule. He is now working with the manufacturer to produce the product at a competitive price.

Yet Zule knows that changing an entire market, and changing suppliers' products, will be a long battle. His goal is to "get industry to phase out high-dead space needles," but notes that, "The syringe manufacturing industry is big…it's hard to think of how to go in and change the industry standard like that."

View the webcast and download Powerpoint slide sets from this conference session here.

Minnesota's Recent HIV Outbreaks Are About So Much More Than HIV

They’re about the state’s failure to properly serve people of color, people who use substances, and people who don’t have permanent housing, advocates argue.
TheBody
8 Jul 21
Harm reduction

US Syringe Exchanges Are Still Under Attack

In some ways, people who inject drugs in the United States are enjoying unprecedented lawful access to syringes and needles. In others, syringe access is facing a wave of revamped aggression. From rural counties to capital cities, regional US governments are limiting, shuttering, and even outright banning syringe service programs.
TalkingDrugs
8 Jul 21
Harm reduction

Making sure naloxone is in the hands of everyone who needs it, whenever they need it, requires far more than simply handing it out from drug treatment services.
Drink and Drugs News
5 Jul 21
Harm reduction

Overdoses have surged during the pandemic. Now, for the first time, Congress has appropriated funds specifically for programs that distribute clean syringes and other supplies meant to protect users.
New York Times
29 Jun 21
More editors' picks